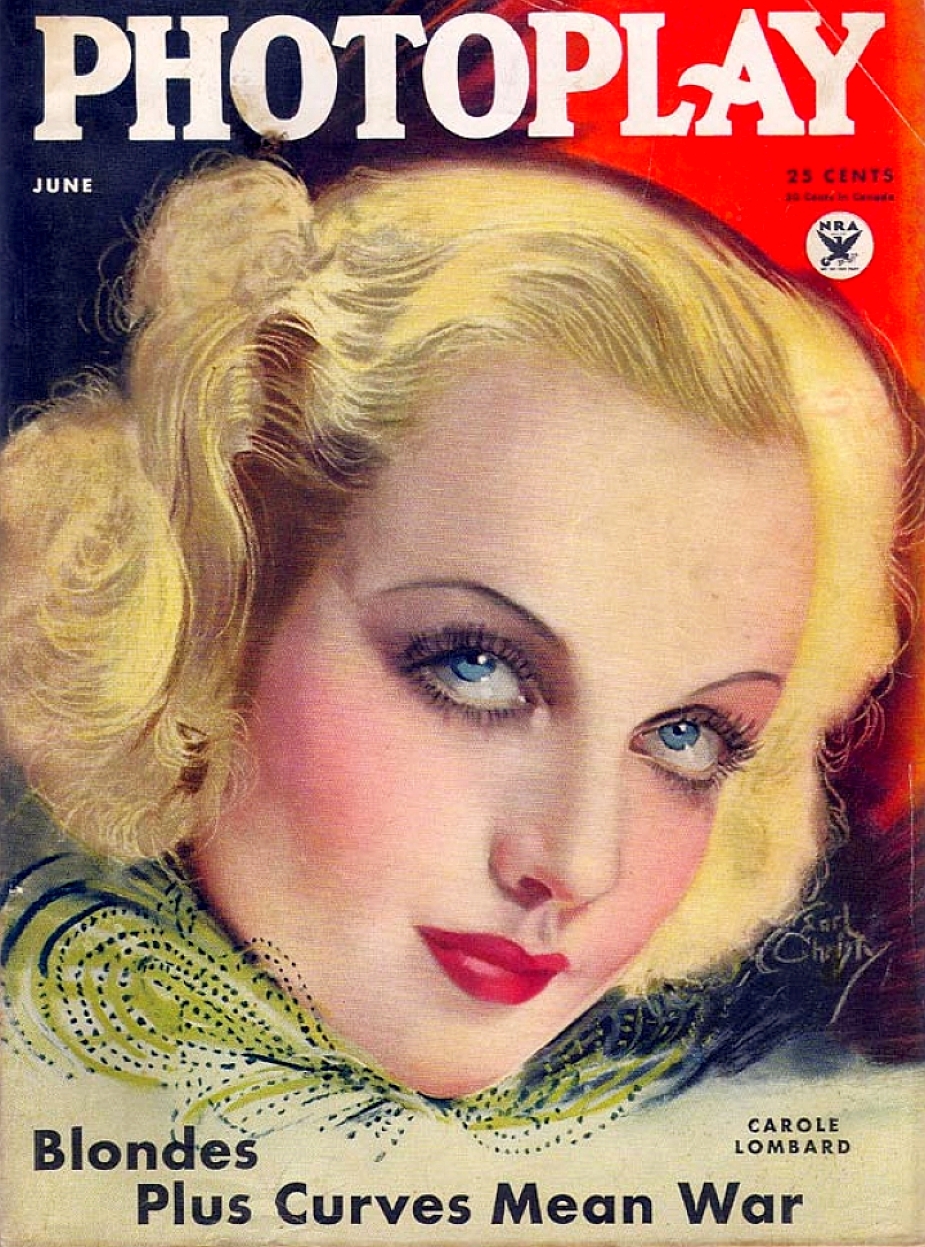 Carole Lombard didn't grace the cover of Photoplay until June 1934, but the magazine hardly ignored her before then. For an example, let's go back five months, to January 1934, as Carole teamed with Gloria Stuart on the one-page feature, "Hollywood Beauty Shop": 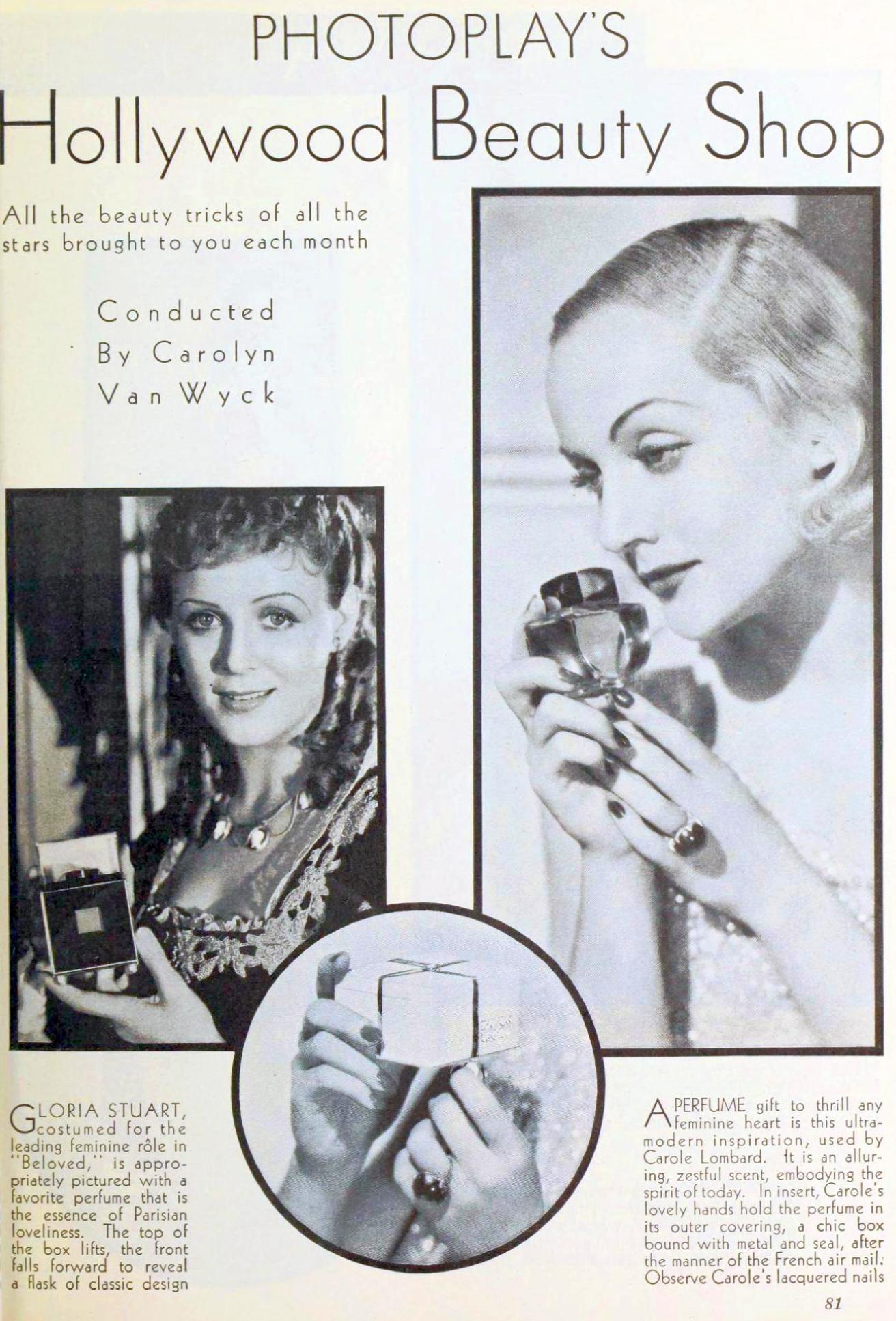 Let's focus on the inset...and Lombard's hands, holding a box of perfume: 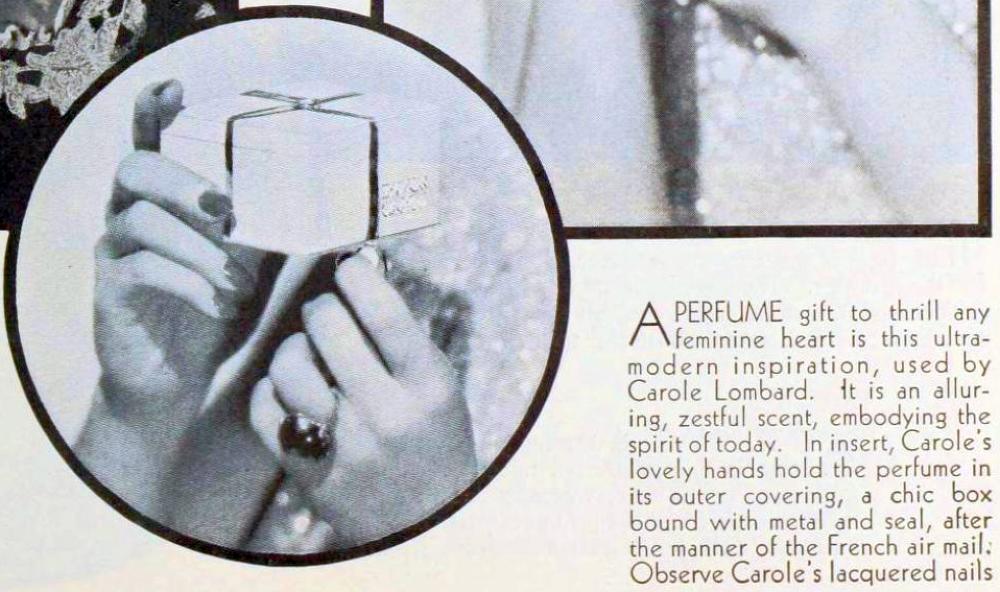 More instances of Carole were scattered throughout the issue. There's a story about "pinch-hitters who made good," and no, it's not a baseball story (if you wanted "hot stove league" info regarding the off-season, other magazines on the newsstand served that purpose) -- we're talking actors who weren't the first choice for roles, but wound up with the part and a career advancement: 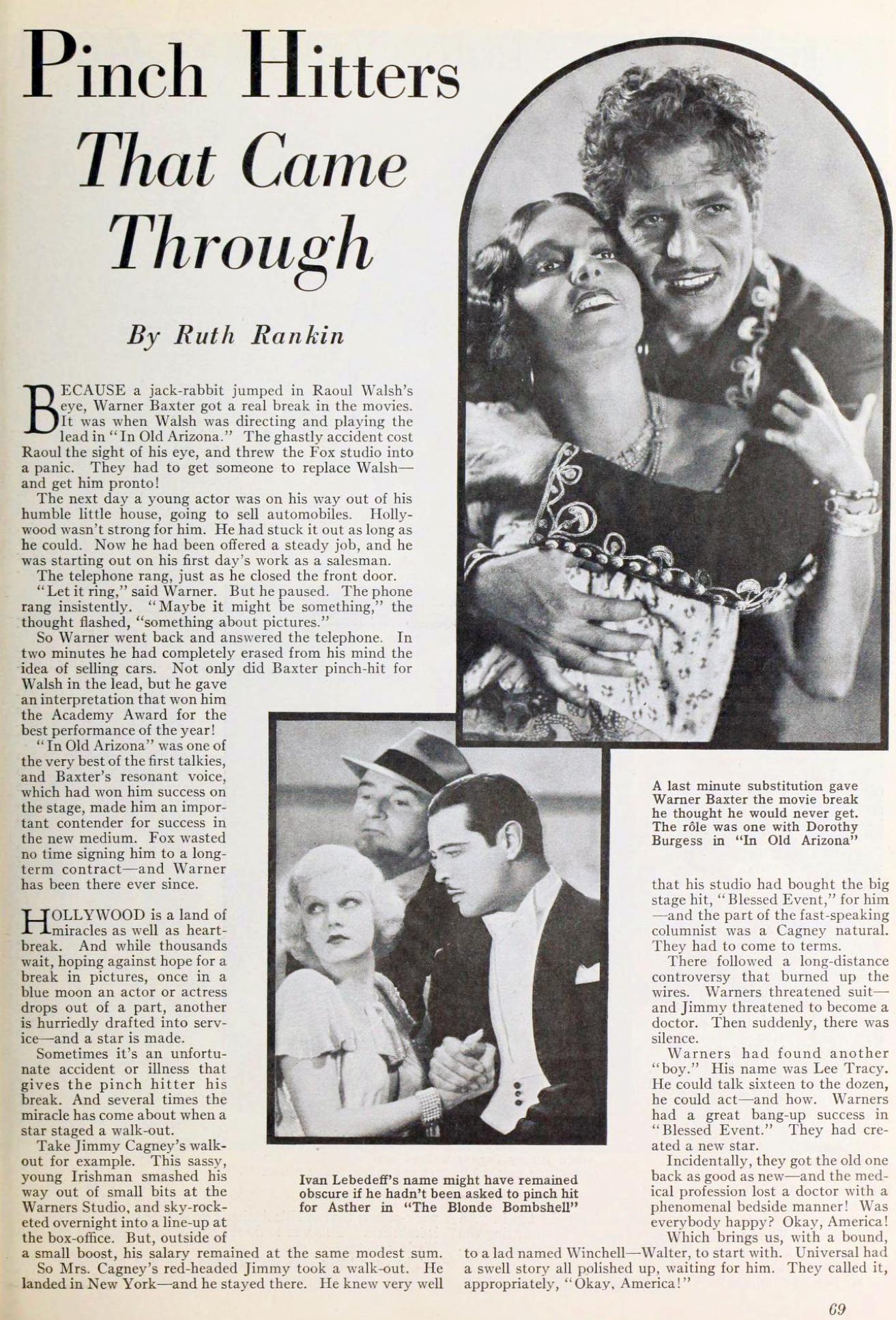 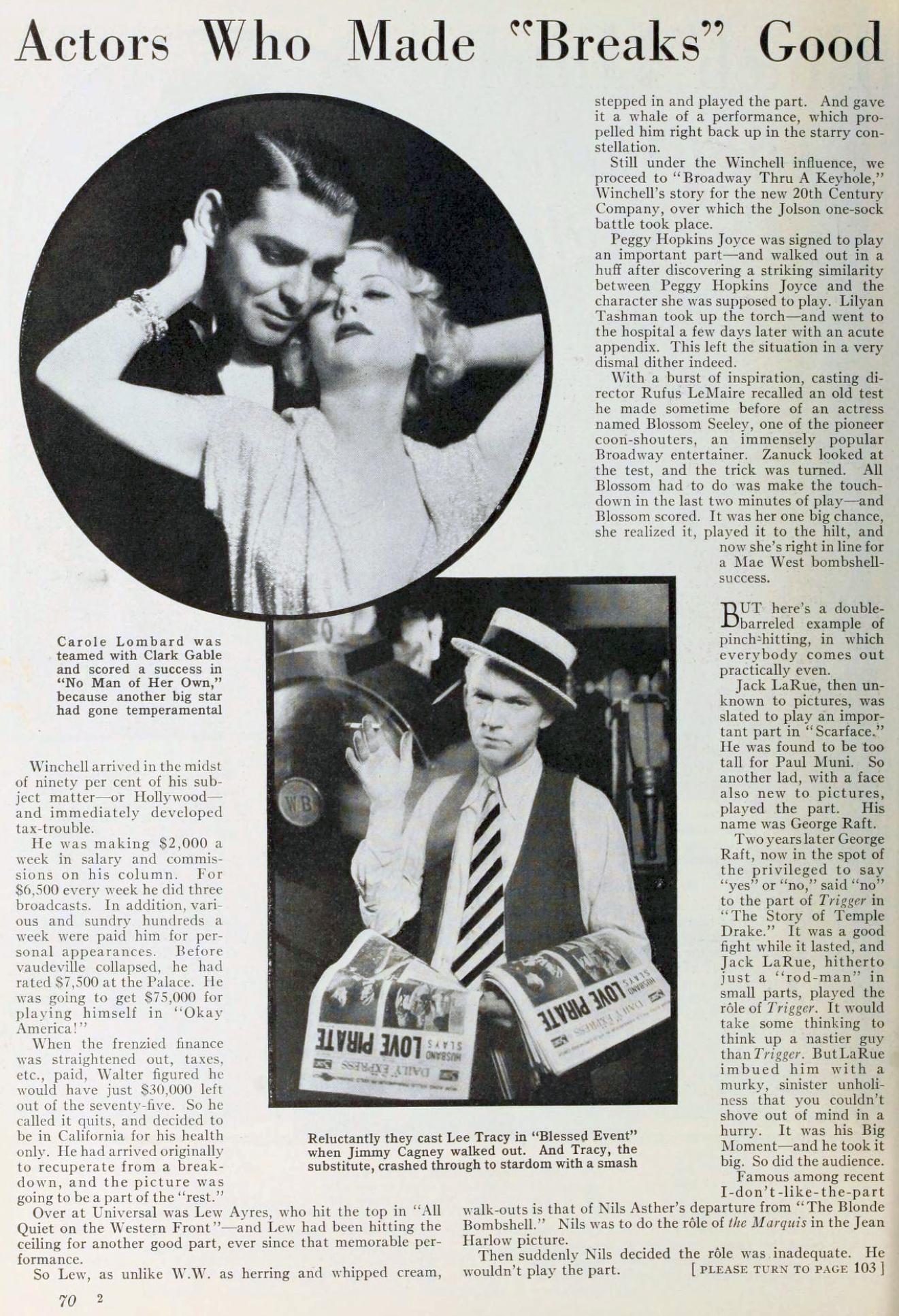 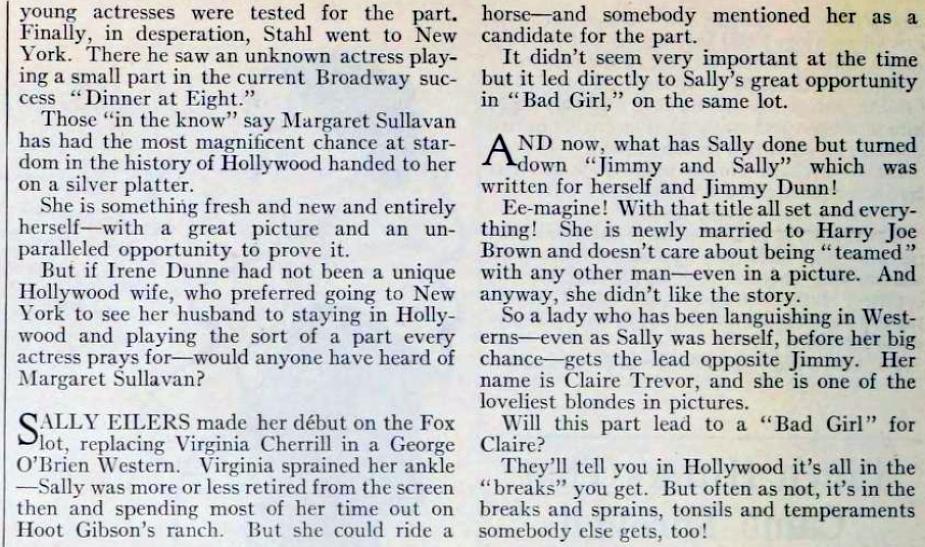 If you didn't catch the paragraphs referring to Lombard, here they are: 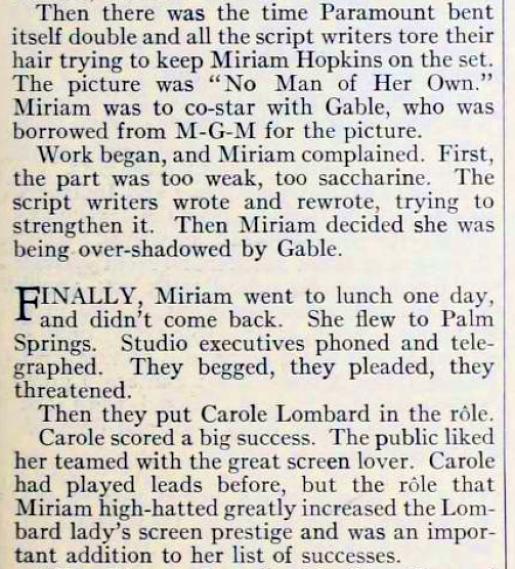 Nine years after filming "No Man Of Her Own," Carole again would replace Miriam Hopkins -- this time for what would be her final film, "To Be Or Not To Be."

The stars' dining habits were discussed by a longtime maitre d', Joe Mann of the Hollywood Roosevelt's Blossom Room. No real surprises here -- if he has any resentments towards his high-class clientele, he certainly won't let on -- but Mann gives one an idea of what makes film celebs tick: 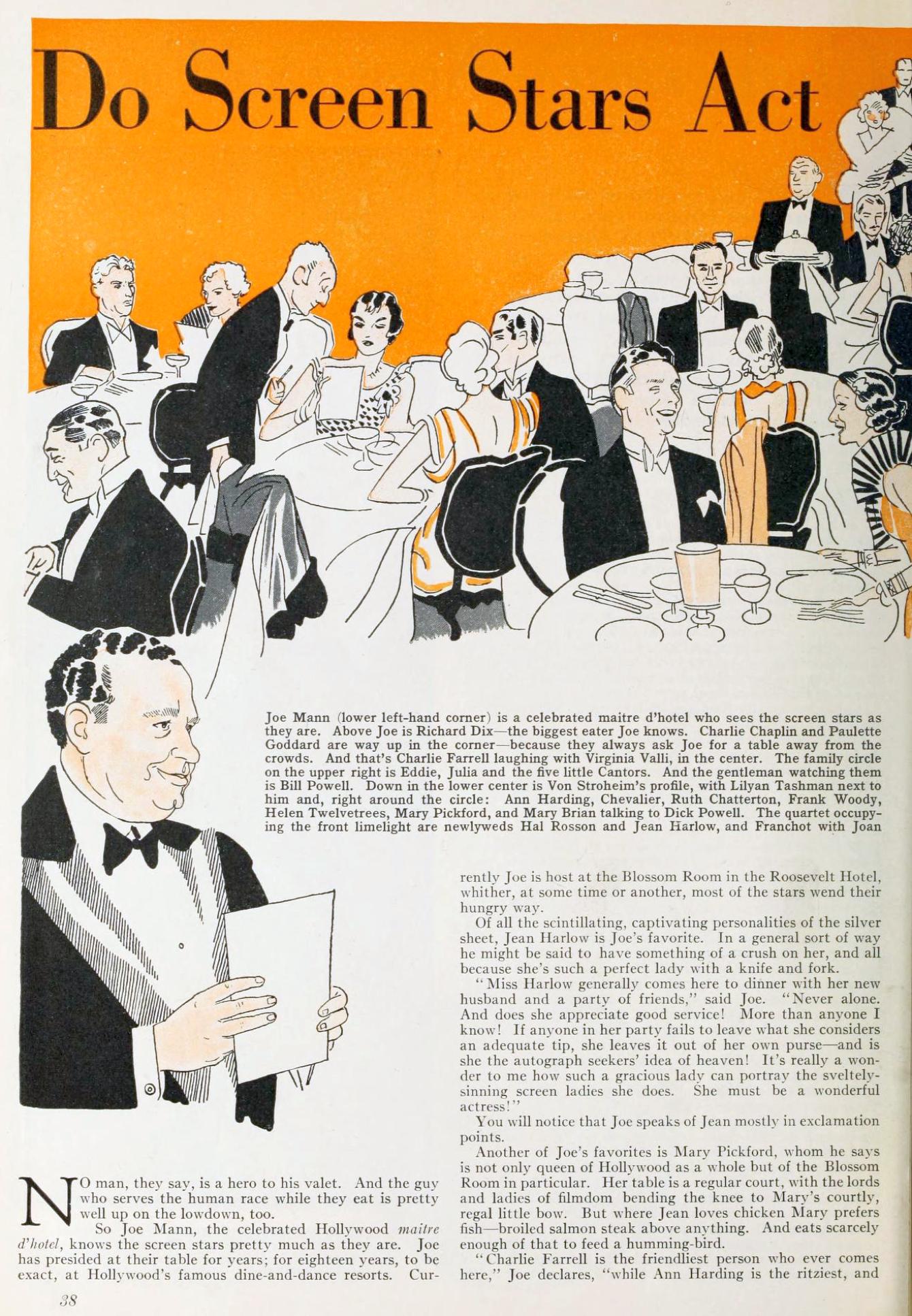 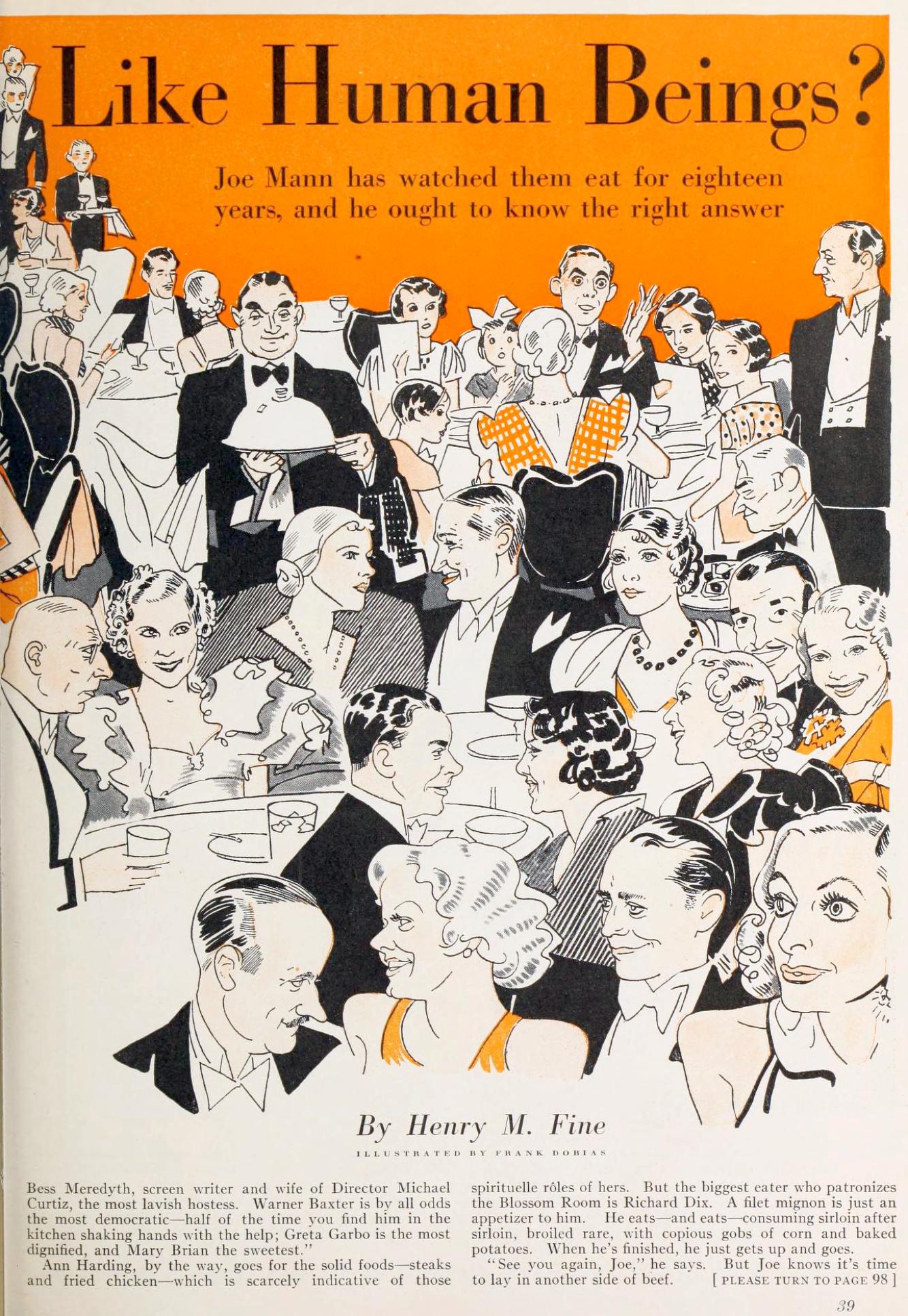 From what we know about Joan Crawford's opinion of MGM cohort Jean Harlow, we doubt they'd be sharing a table.

There's a brief reference to Lombard and ex-husband William Powell, who occasionally dined together:

In addition, there's a fanciful fiction, "Merry Ex-Wives Of Hollywood" (a la "The Merry Wives Of Windsor"), though our eyes may view it along the lines of "The First Wives Club." (Imagine Carole, Joan Crawford and Lilyan Tashman singing "You Don't Own Me"!): 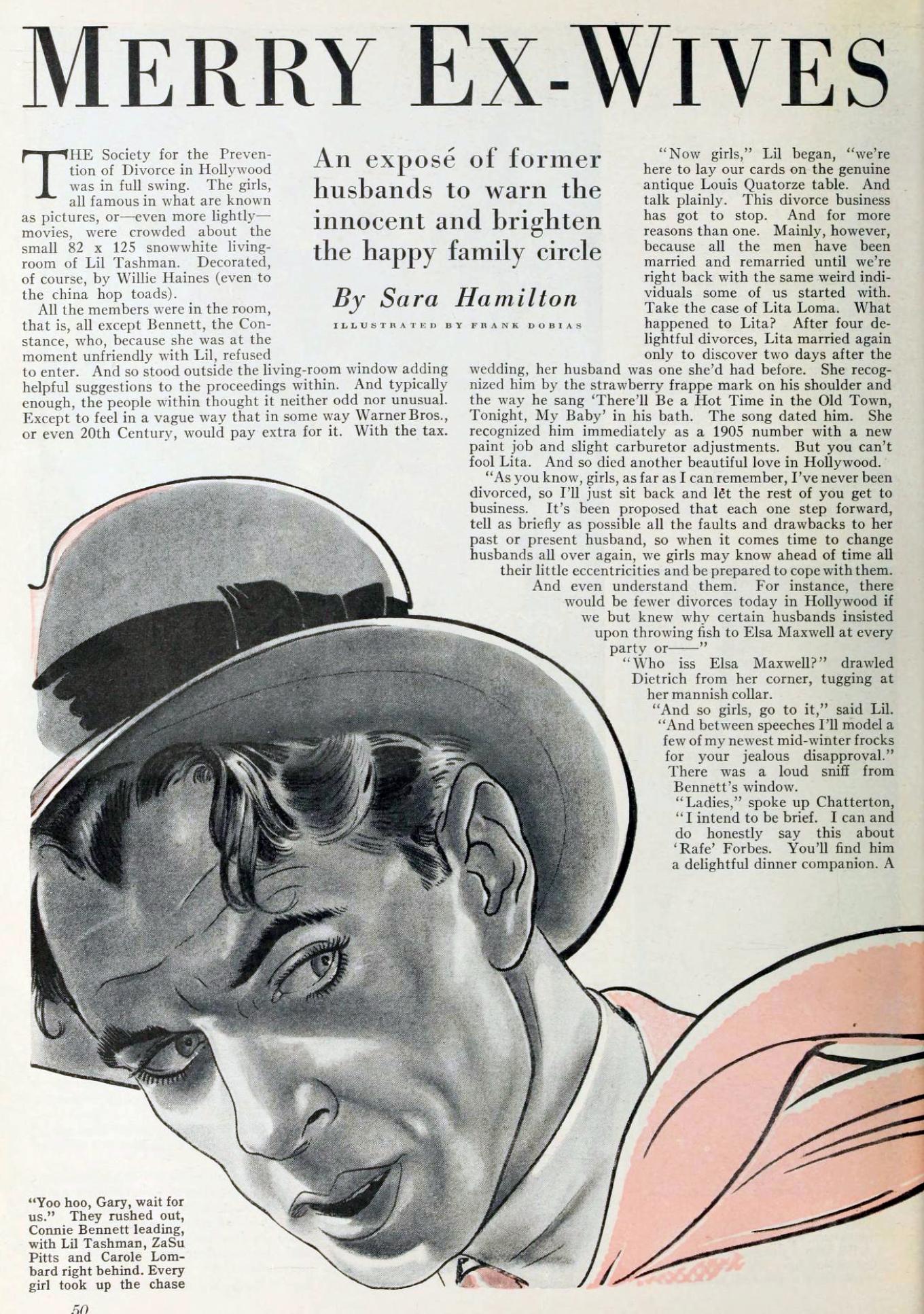 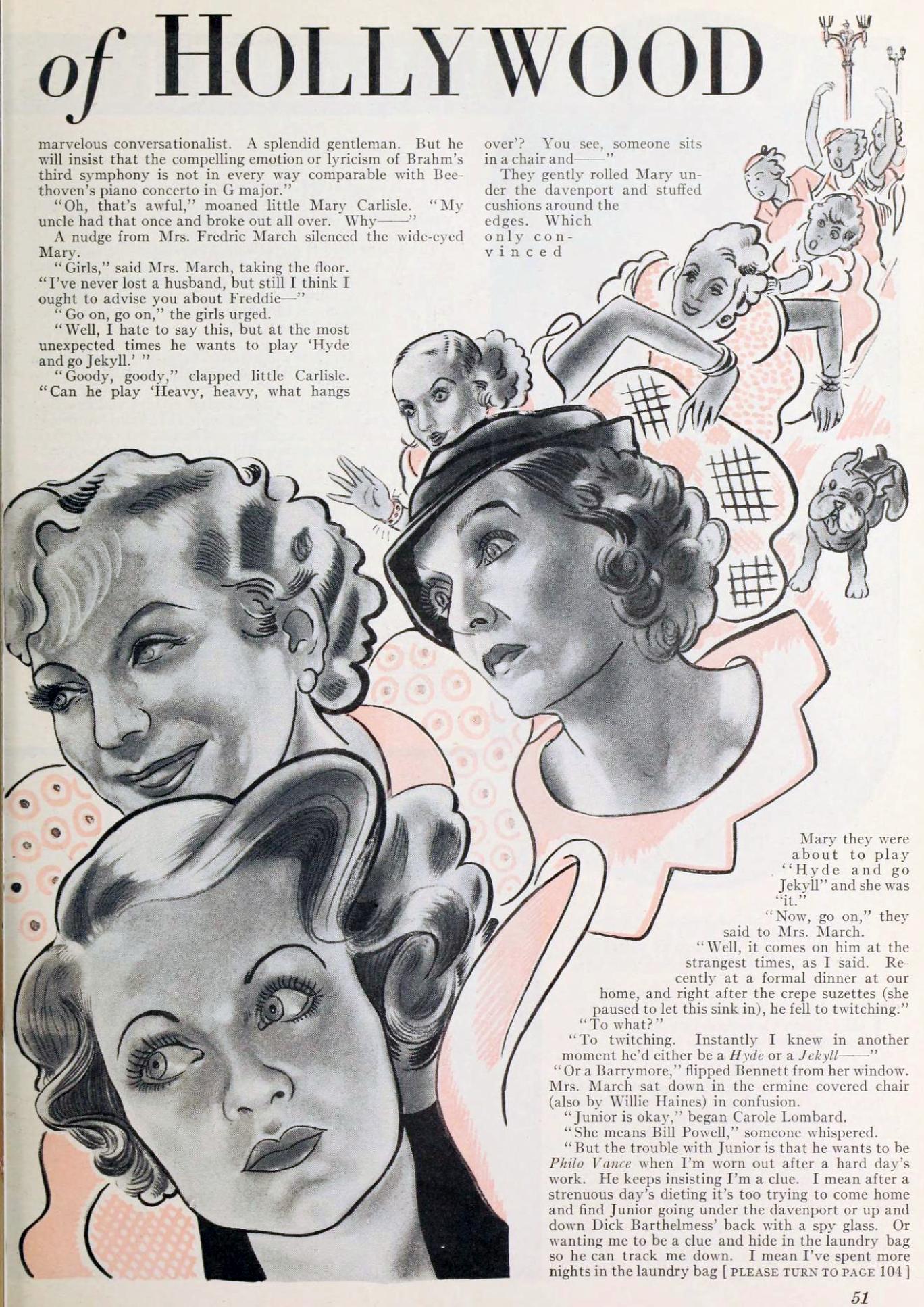 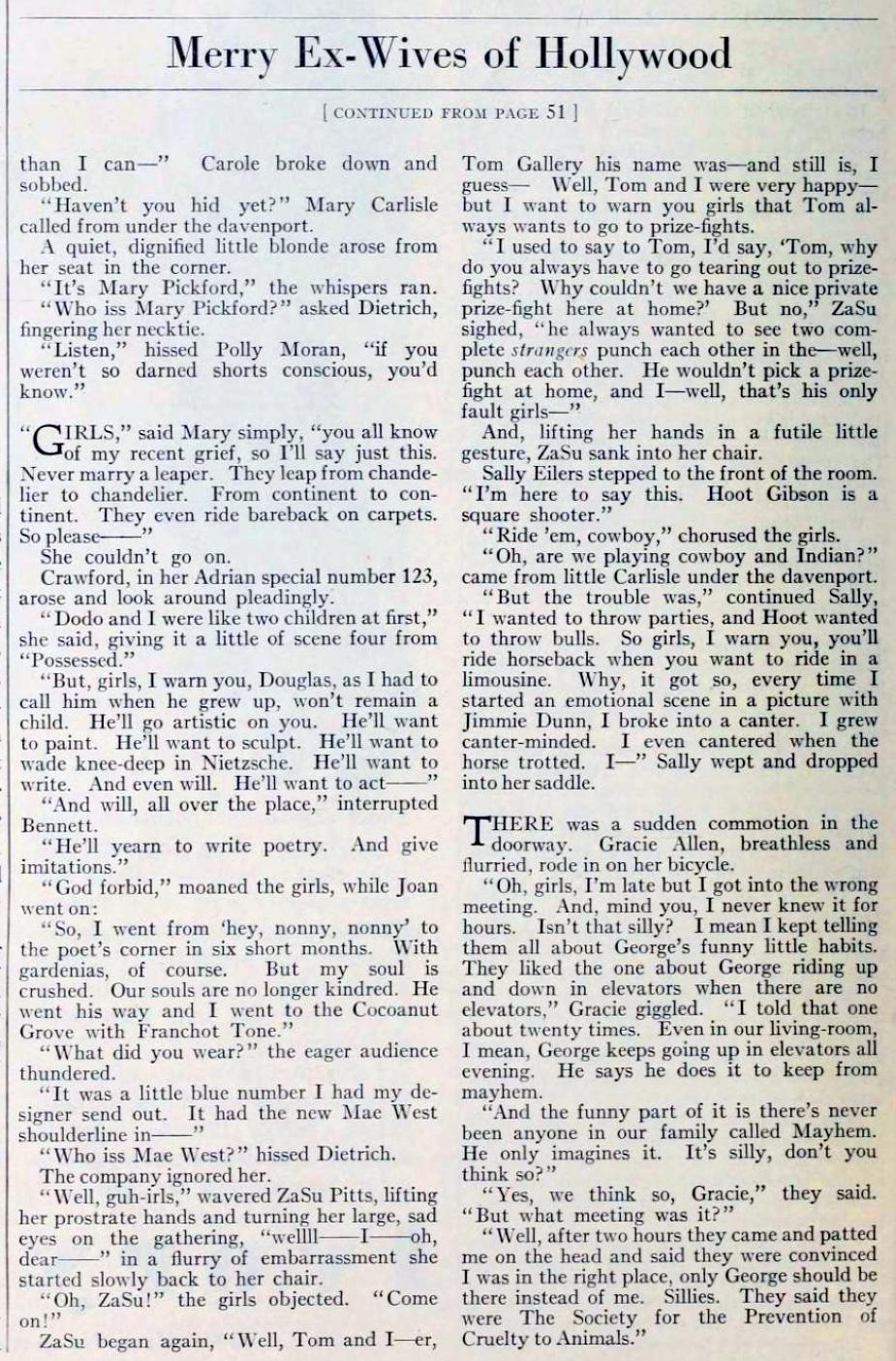 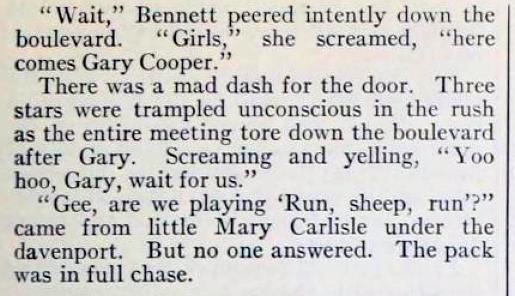 Finally, the Cal York gossip column (there was no "Cal York"; the name was an amalgam of California and New York, representing Photoplay's two main editorial offices) includes a brief about Carole's new home:

Incidentally, isn't that an amazing photo of a Claudette Colbert sans glamour for the overlooked DeMille film "Four Frightened People"?)

The issue's cover was of Crawford, an actress who exuded plenty of glamour at this time (both this and the Carole cover were drawn by Earl Christy): 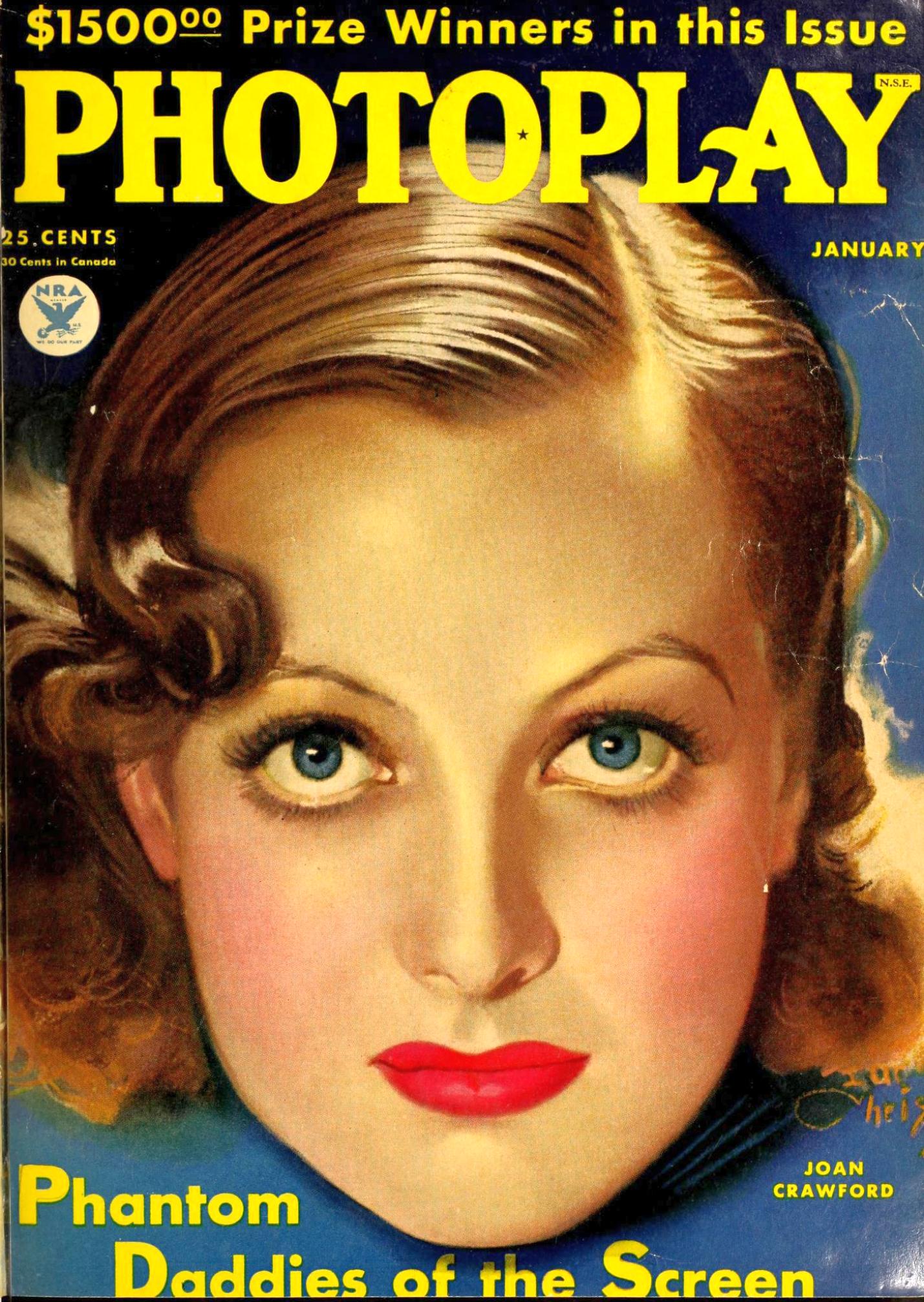 And inside was an ad for an item I had never heard of -- movie star lamps (this gets me thinking of "A Christmas Story"): 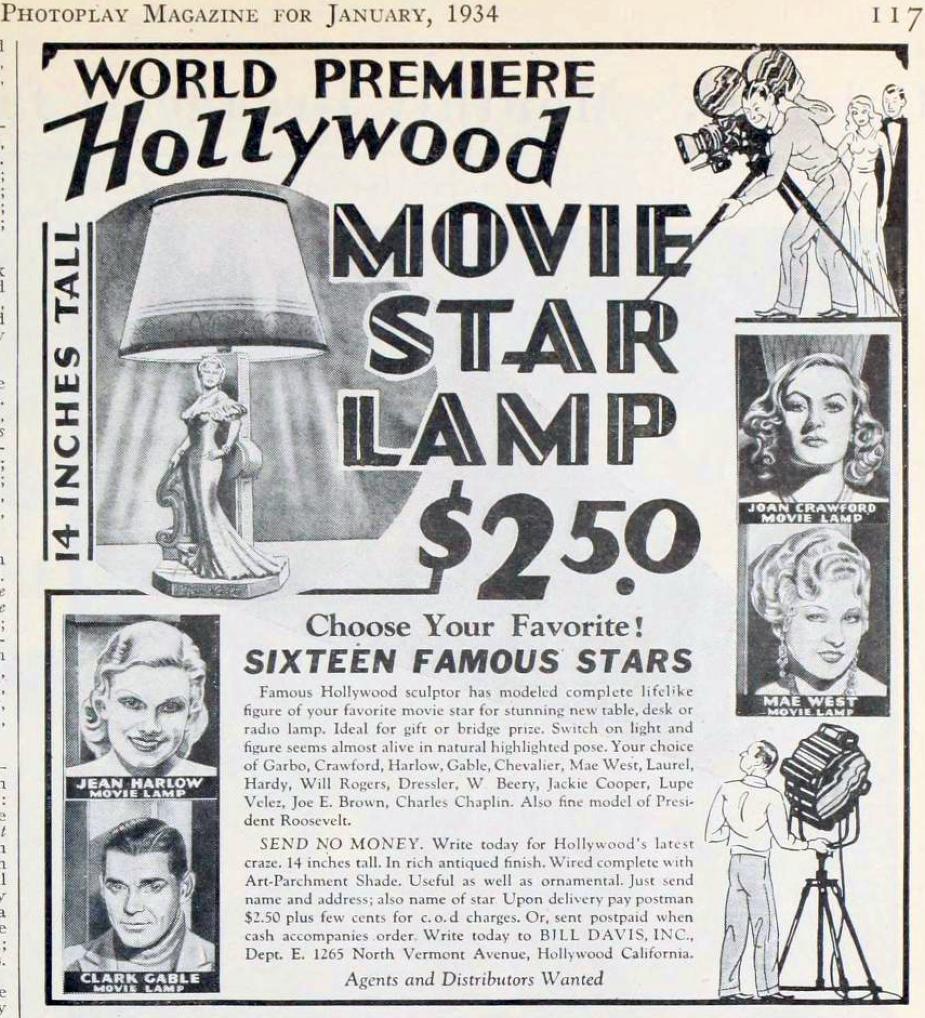 There's no Lombard lamp, but ones for Crawford, Harlow, Clark Gable, Maurice Chevalier and Mae West, among others. Two questions: Do any of these still exist, and did the company manufacturing them get permission from the studios to use the stars' images? If not, the resulting lawsuits would make these lamps all the rarer.
Collapse