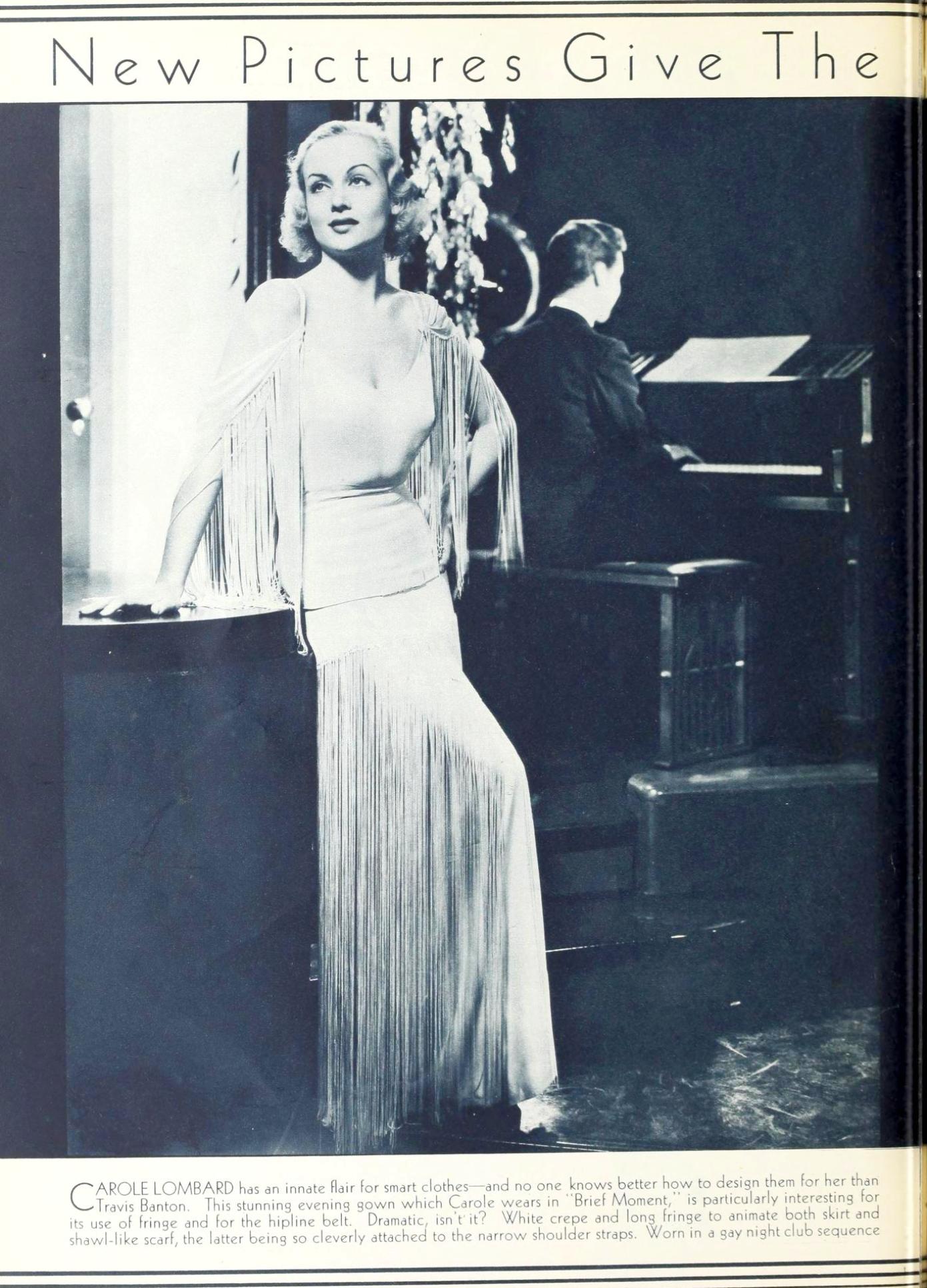 We've seen that image of Carole Lombard before, in a promotional photo for Columbia's "Brief Moment"...but here it is, in the September 1933 issue of Photoplay, as part of a fashion spread from Seymour, the magazine's maven on the subject. He said she "has an innate flair for smart clothes -- and no one knows better how to design them for her than Travis Banton," later using such adjectives as "stunning" and "dramatic."

Carole's seen twice elsewhere in the spread, wearing another "Brief Moment" Banton gown while sharing the page with Lilian Harvey... 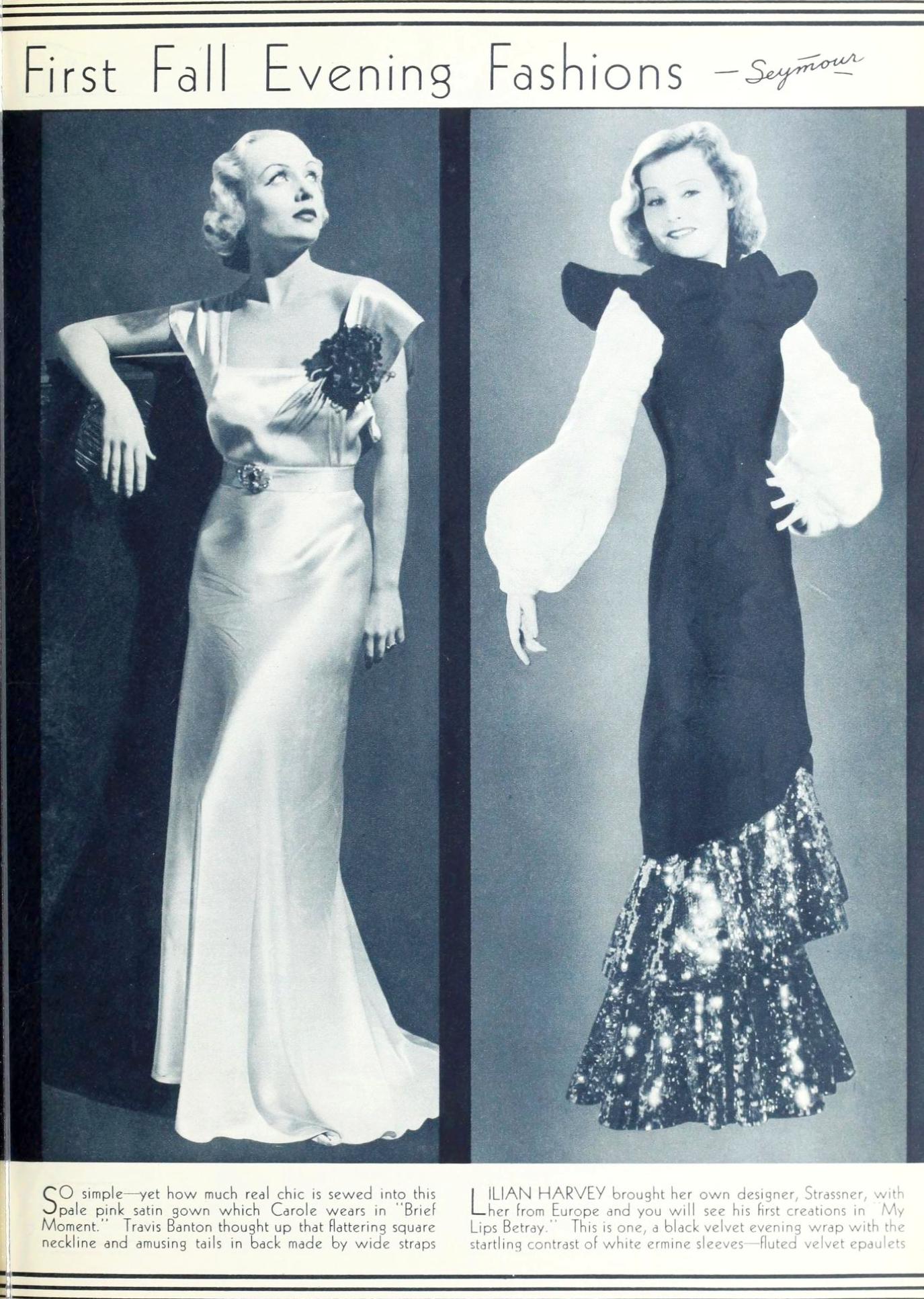 ...and one more from "Brief Moment," but this is a woolen ensemble blending an emerald green coat with red fox (in the days before our collective consciousness was raised about furs). Banton didn't design that, but he did come up with the frock also seen on the page and worn by Lombard's Paramount cohort Claudette Colbert: 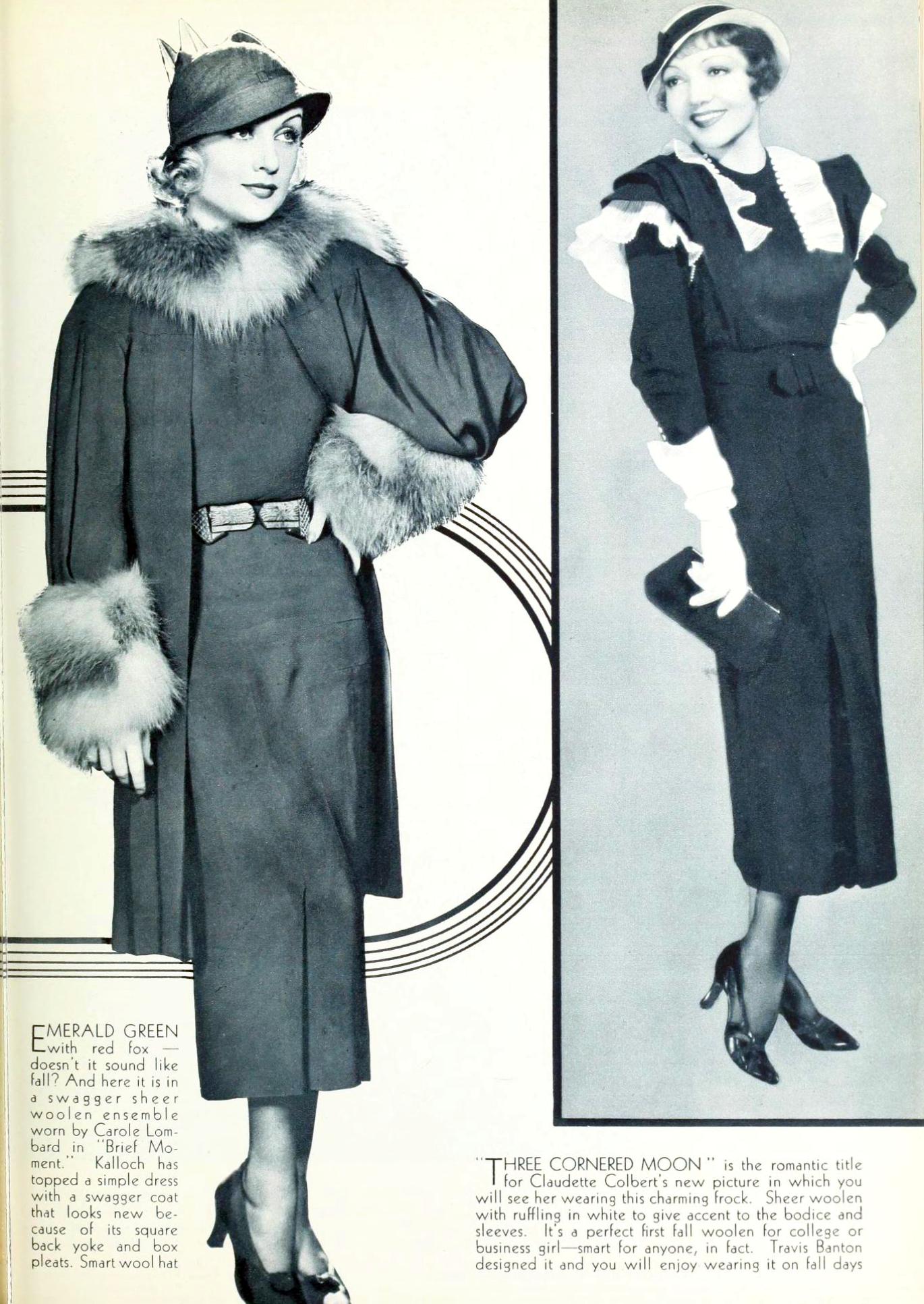 Earlier in the issue, Carole shares a page with Katharine Hepburn: 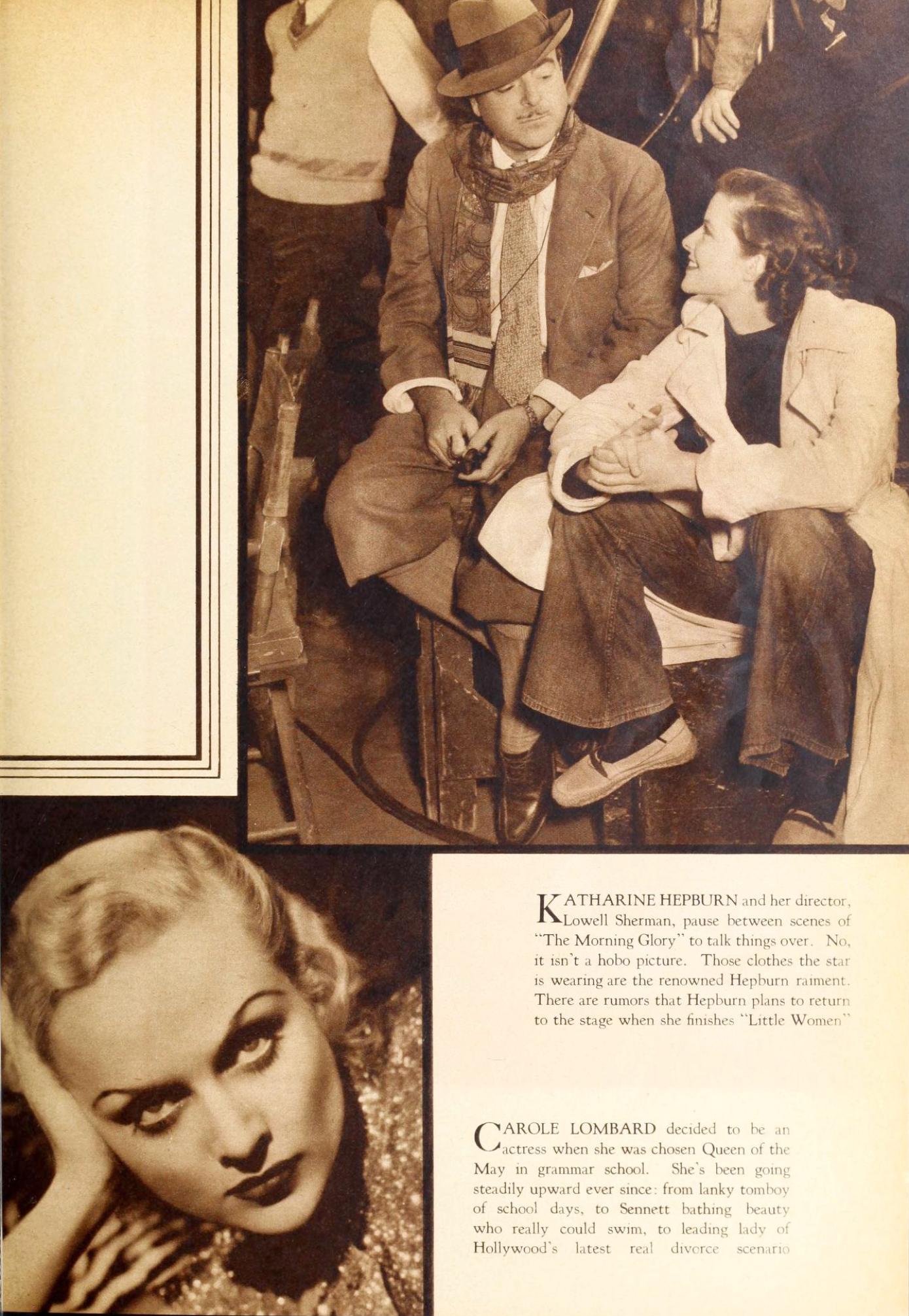 This issue hit newsstands a few days before Lombard obtained her divorce from William Powell, and there was a brief item about it. (Fortunately for Photoplay, Carole went through the procedure and didn't change her mind at the last minute.) 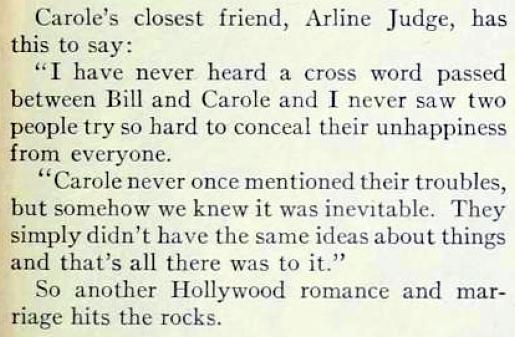 By the way, the page where the first part of that item ran also featured several photos of stars' doubles, including those for two Joans -- Blondell and Crawford -- as well as George Raft and his close friend Mack "Killer" Grey: 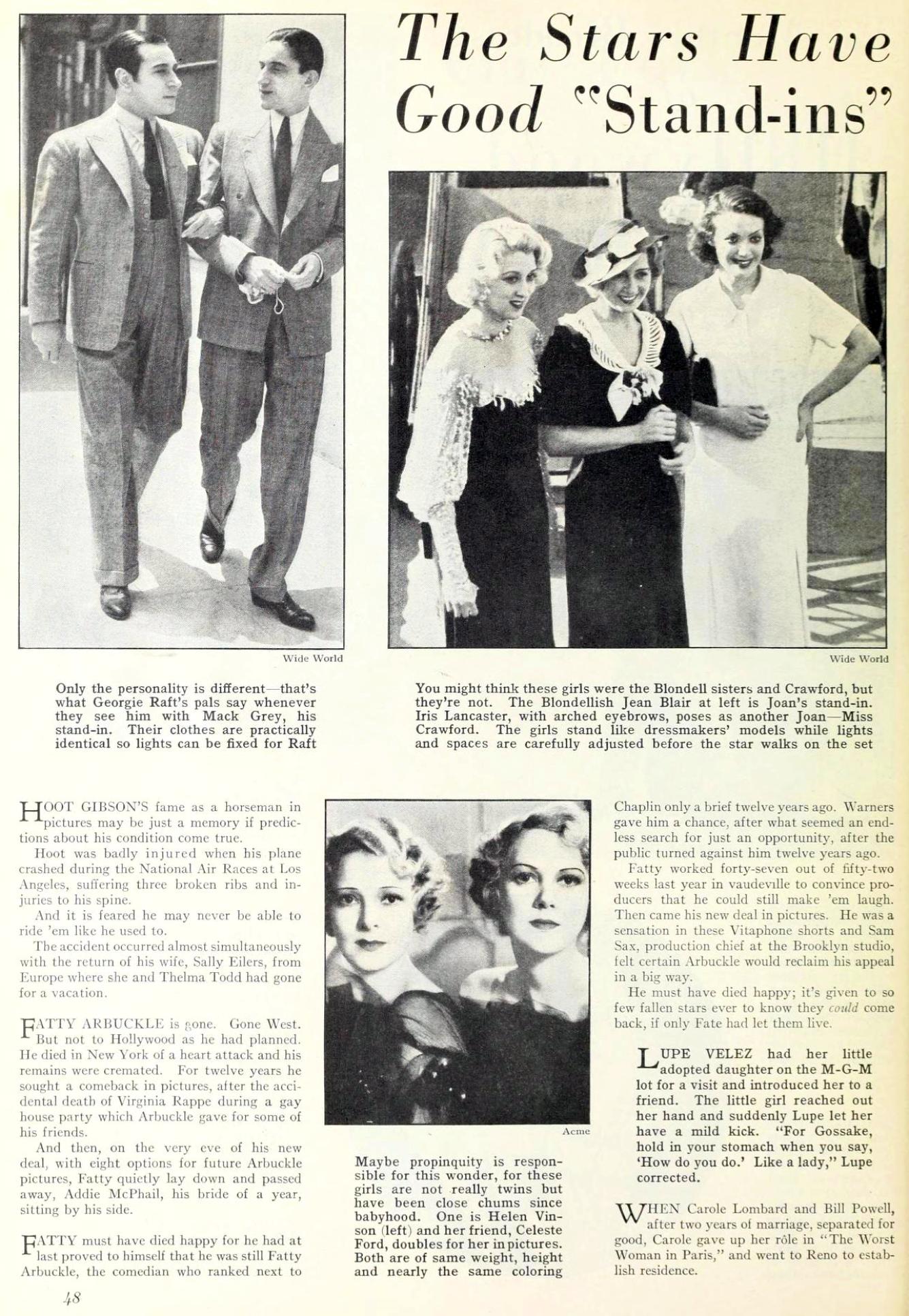 We've previously shown Lombard in an ad for Borden's Malted Milk (http://carole-and-co.livejournal.com/552459.html), but here it is in better condition, a tie-in to "Brief Moment": 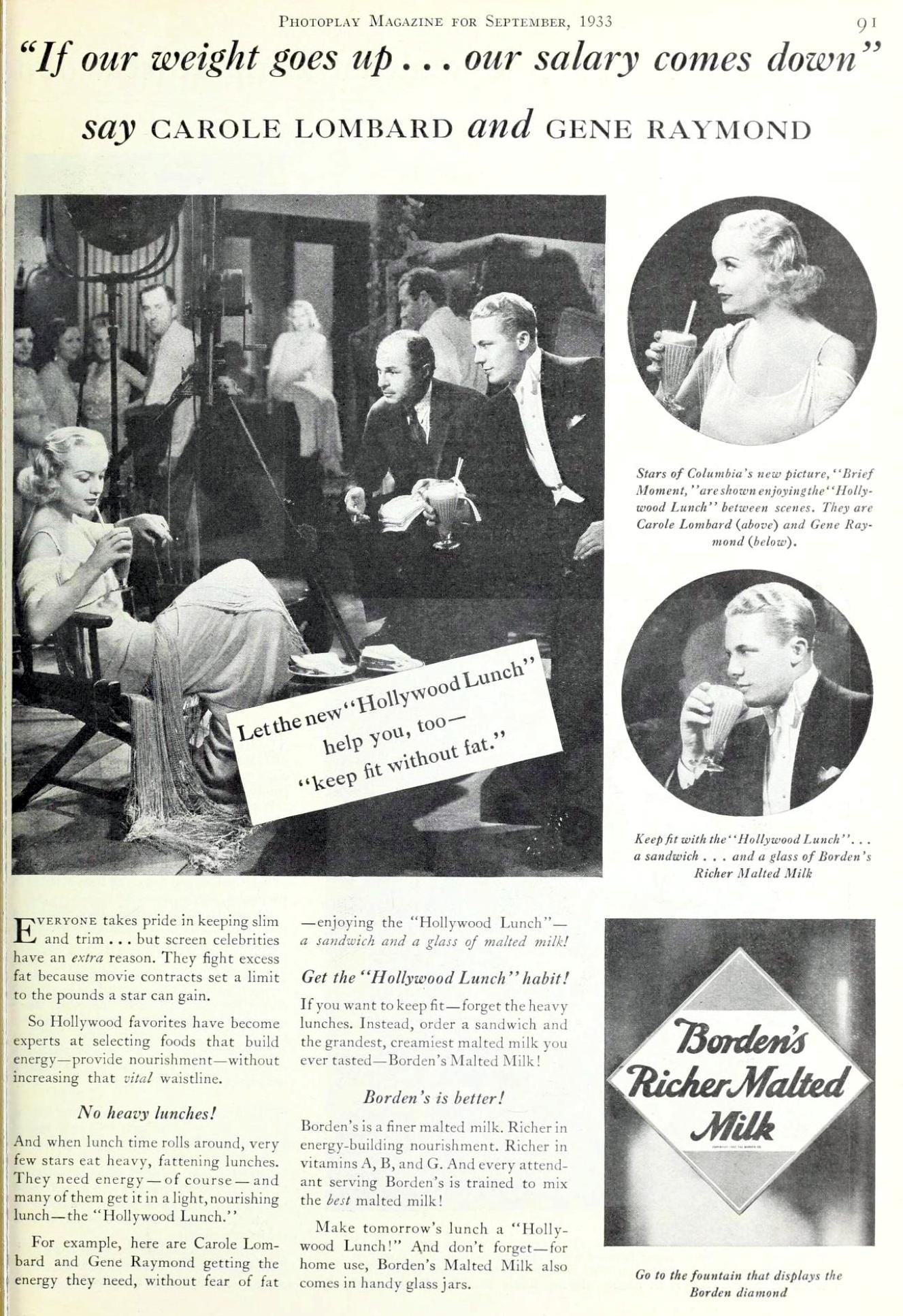 The Photoplay cover subject that month, courtesy of Earl Christy, was none other than the uncrowned queen of San Simeon, Marion Davies: 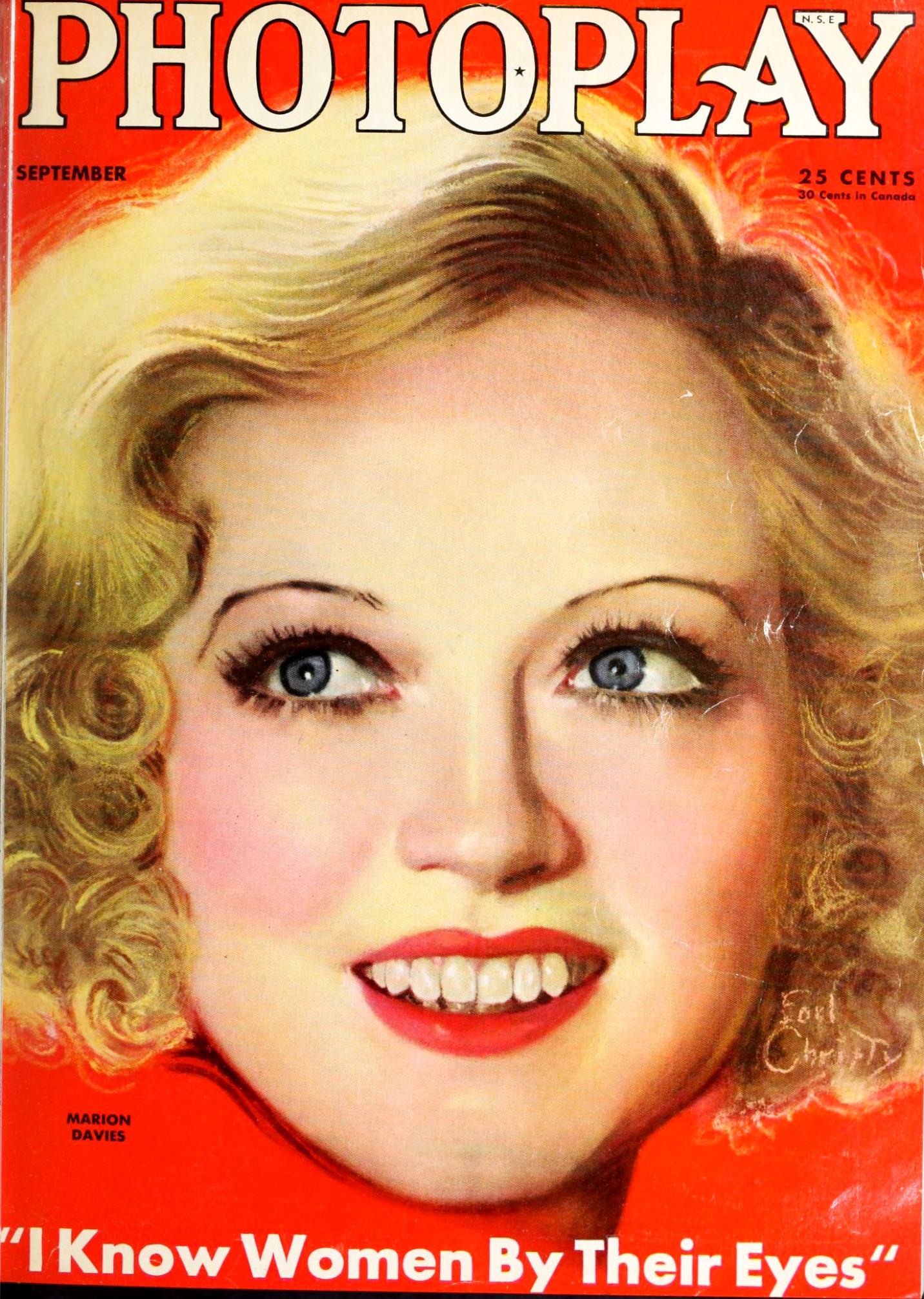 There were four full-page film ads inside this issue, and a glance at them rather defines the status of their respective studios as fall 1933 began. Lordly MGM paraded its sheer star power (John and Lionel Barrymore, Clark Gable, Robert Montgomery, Helen Hayes, Myrna Loy) in "Night Flight"... 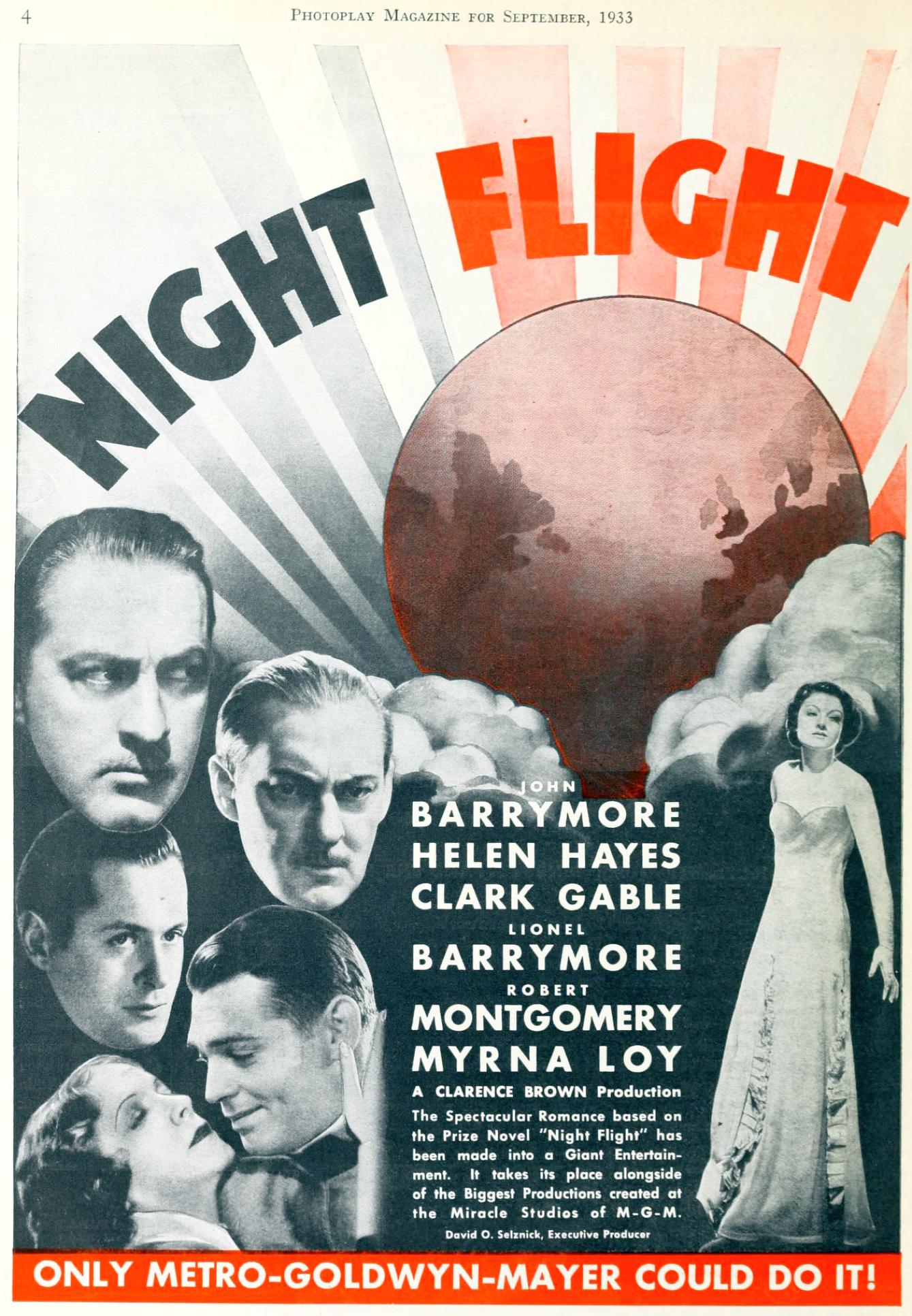 ...sophisticated Paramount showed off Marlene Dietrich in the erotically charged "Song Of Songs"... 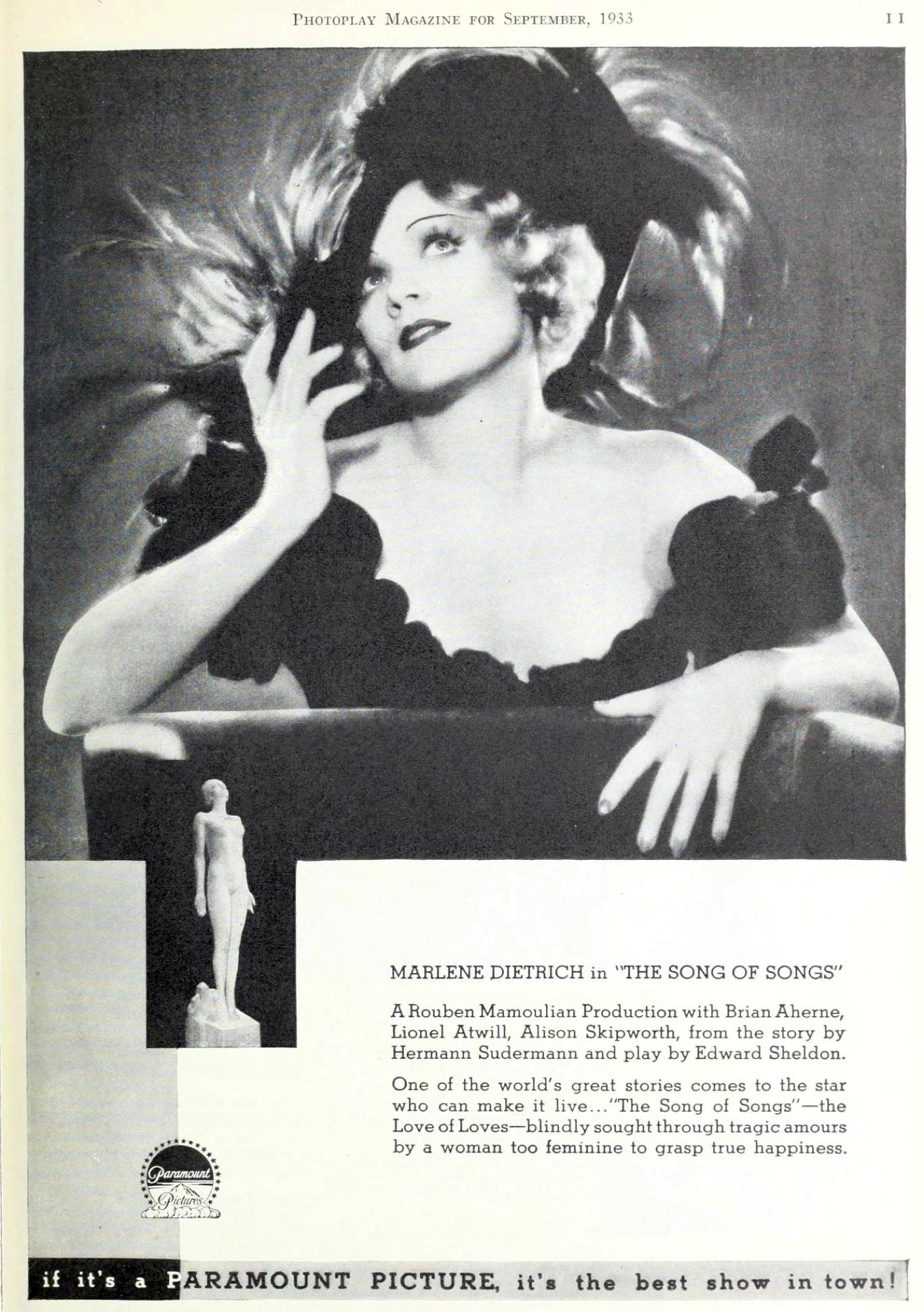 ...pugnacious Warners promoted four of its films (actually five if you count "I Loved A Woman") and its stellar roster of players -- Joan Blondell, Warren William, Kay Francis, George Arliss, Leslie Howard, Glenda Farrell and so on... 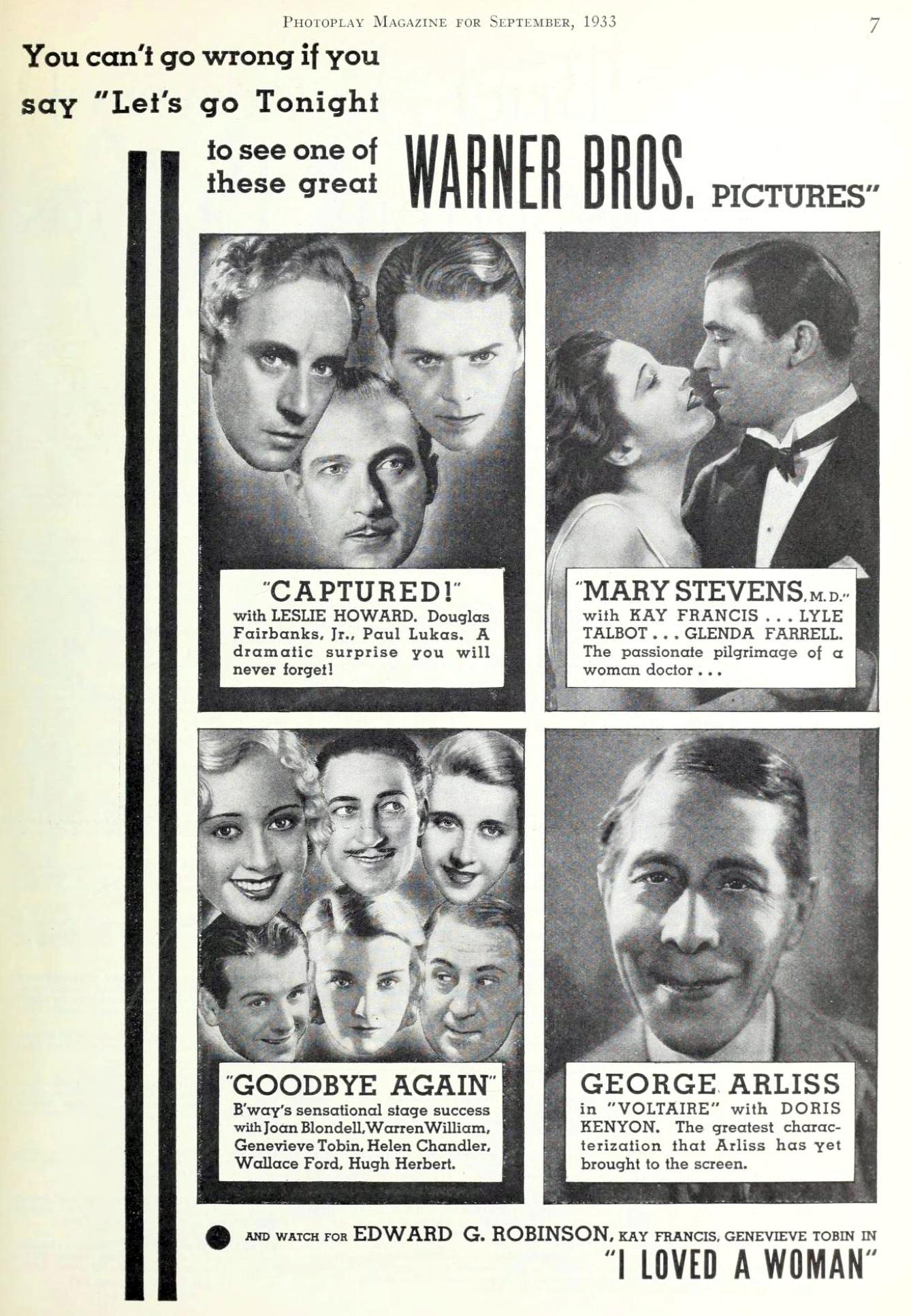 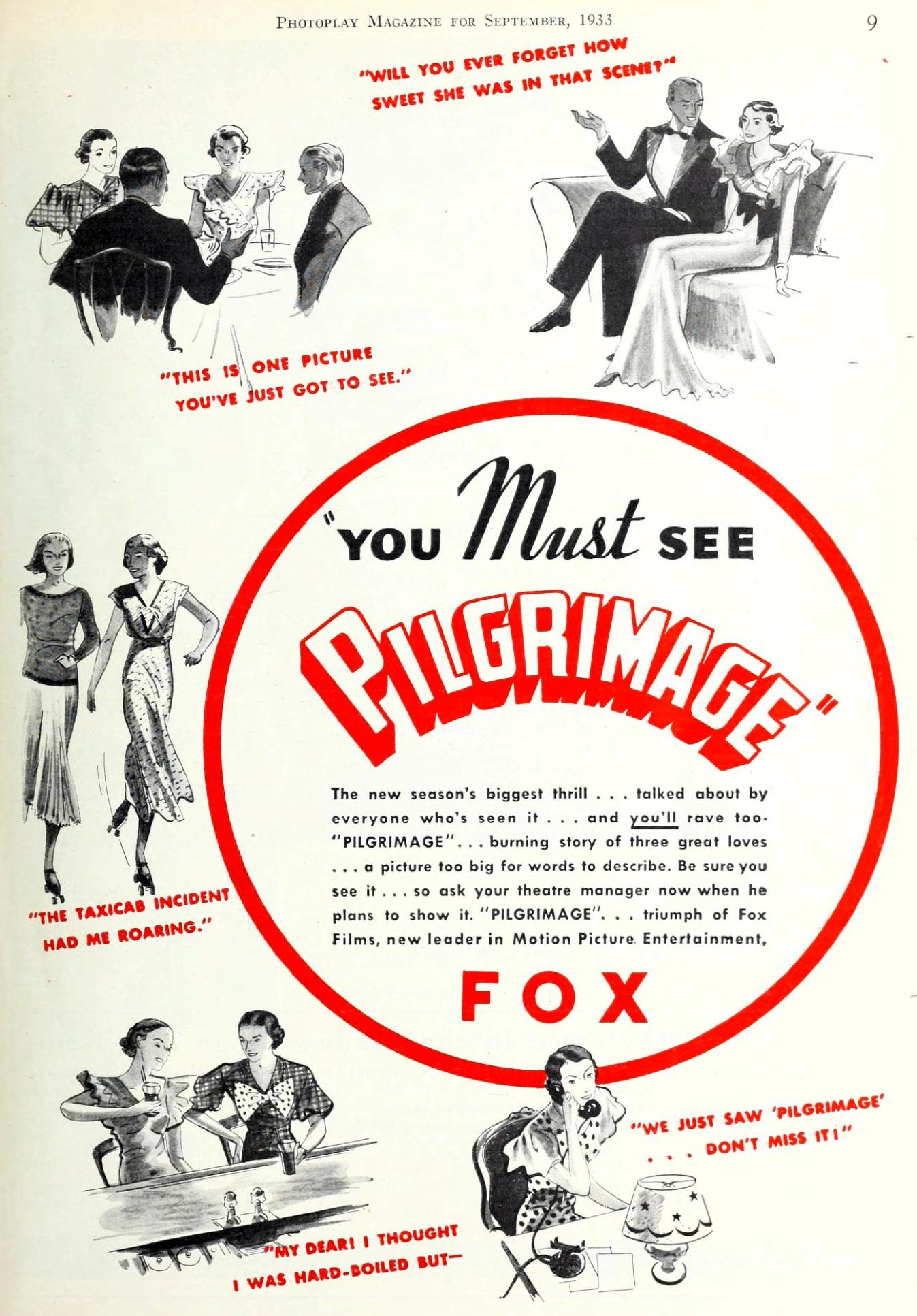 ...but look what's missing. No mention of stars, no mention of director. Perhaps this explains why Fox was in such a weak position in 1933, assimilated by Darryl F. Zanuck's Twentieth Century Pictures two years later.

The film, "Pilgrimage," was released on Aug. 18 (the day Lombard's divorce from Powell was granted). It was directed by John Ford, who really wasn't "John Ford" yet (triumphs such as "The Informer," "Stagecoach" and "The Grapes Of Wrath" were still in the distance). It rather lacked in star power, too (its leads included Norman Foster and Heather Angel), and can be found in the "Ford On Fox" DVD collection.
Collapse