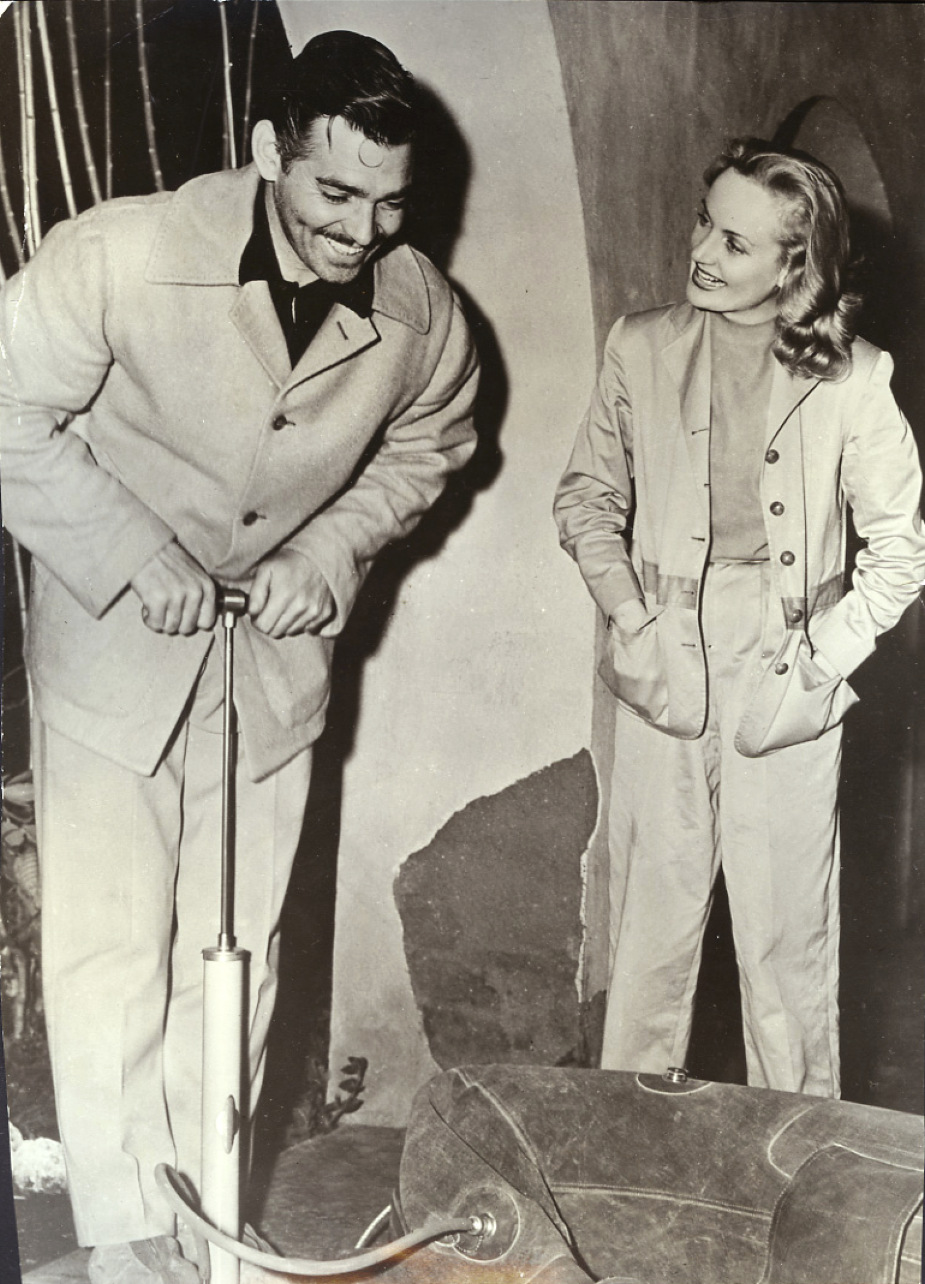 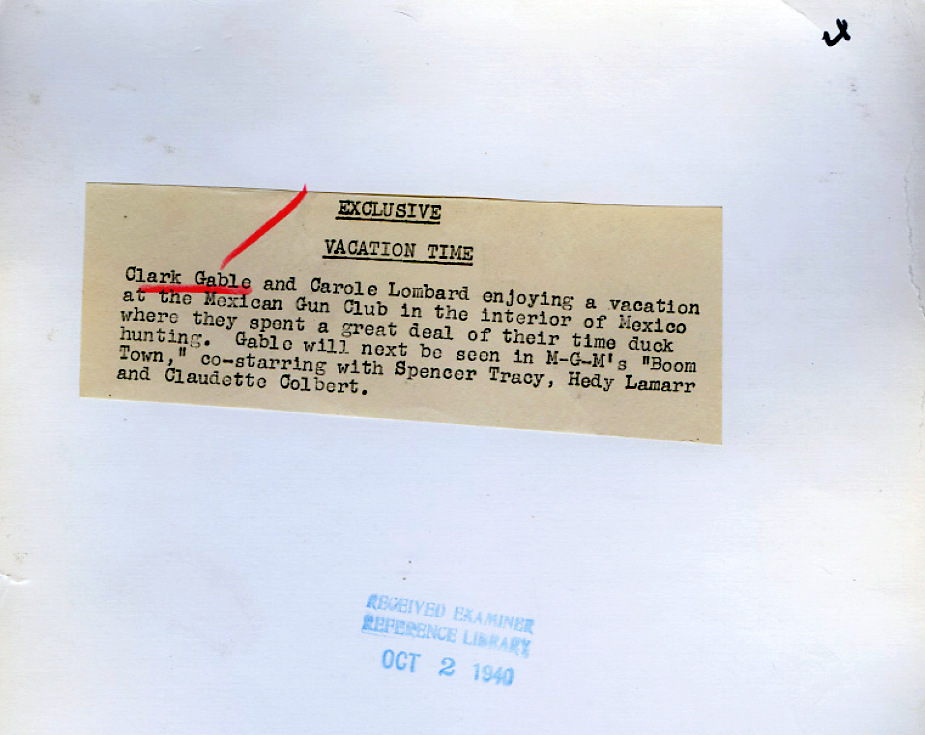 Carole Lombard and Clark Gable would spend less than three years as a married couple, but among the things they enjoyed doing was living the outdoor life. Now an artifact from that facet of their relationship is up for sale.

We're referring to this portable Coleman stove owned by Gable, including a canvas bag with his initials: 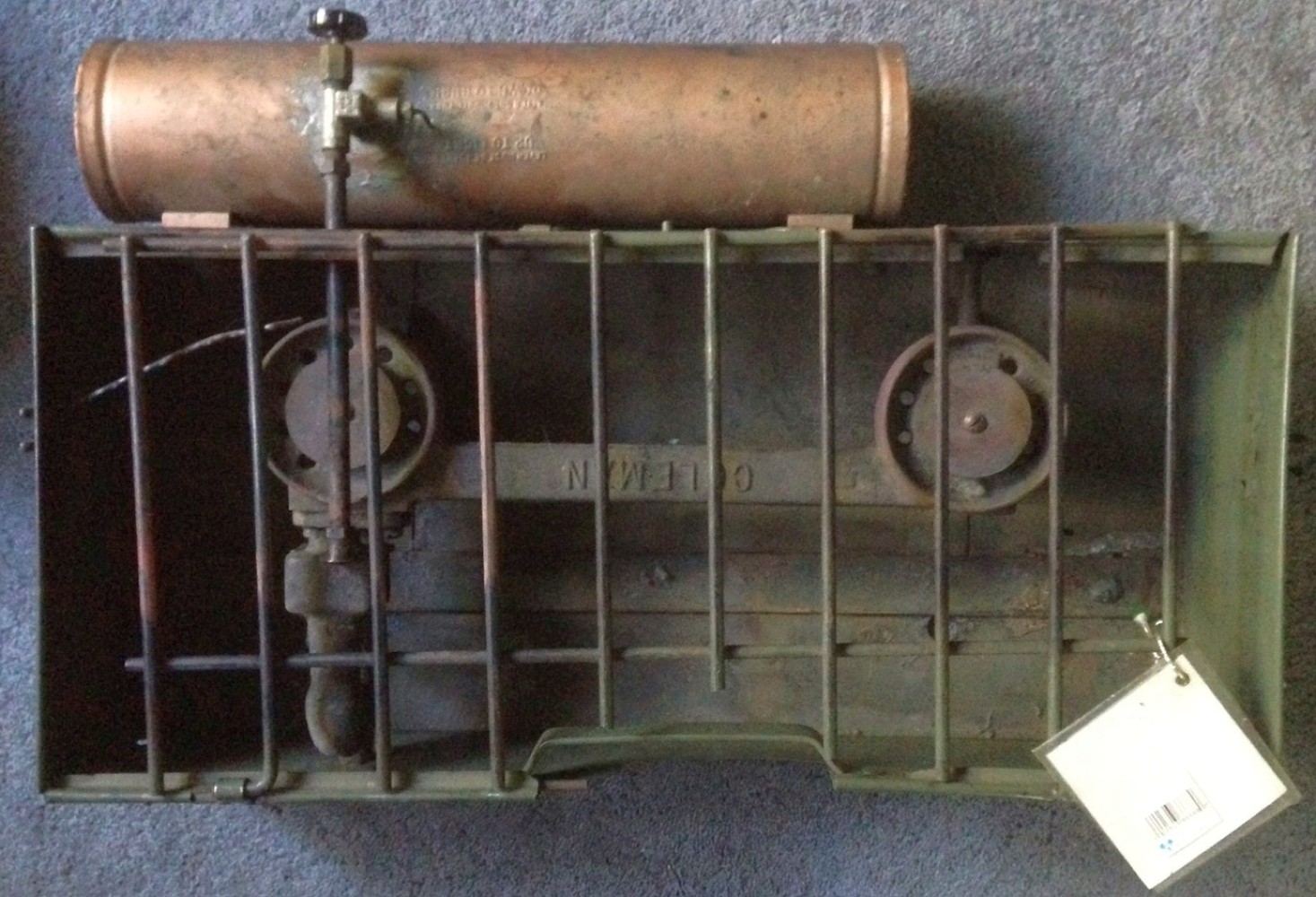 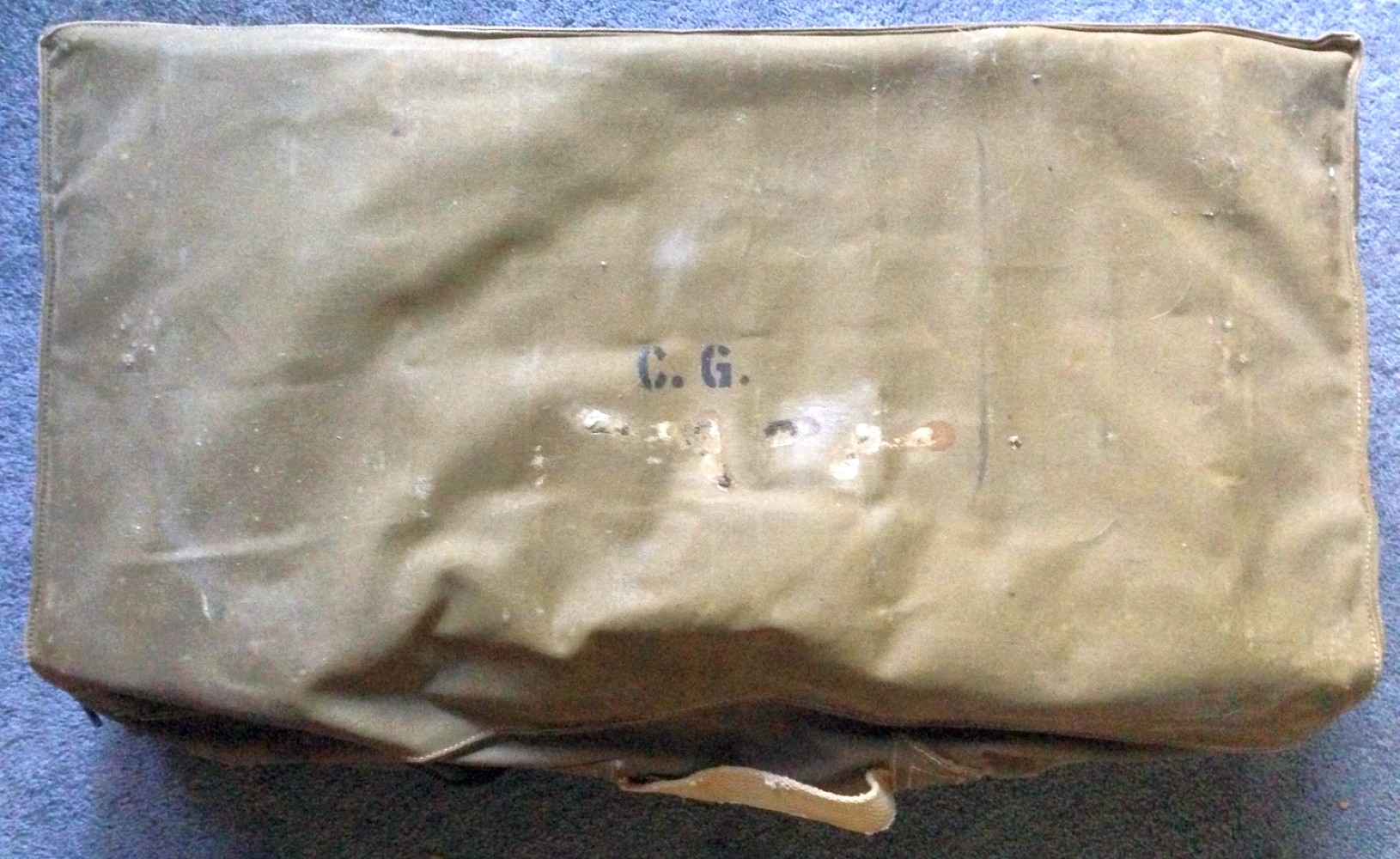 There's some history behind this stove, as the seller explains:

"This vintage Coleman camping stove belonged to legendary actor Clark Gable. It comes with a custom made case monogrammed 'CG,' letter of authenticity and photo of Gable and Lombard sitting on their truck. All of Gable's hunting, camping and fishing equipment were in these monogrammed canvas cases.

"This lot of camping equipment was purchased at the 1994 Christie's auction that was held by son John Clark Gable. Includes Letter of Authenticity. I purchased this from Sid Cahuenga's at Disney Studios, then MGM studios (it still has the original tag on it). At that time they had many other items from this lot including a mess kit and tent stakes. Back in those days Sid's carried mostly real film and actor memorabilia. They had a buyer which went to auctions and estate sales and resold at Sid's.

"I was probably more of a Carole Lombard fan but was a fan of Gable because of what I had read in David Niven's book, 'Bring on the Empty Horses.' Probably one of the best candid looks at old Hollywood. Anyway, since Gable and Lombard married during a break in the filming of 'Gone with the Wind' they never had a decent honeymoon.

"They took a 3-week vacation in February 1940 to Hattie Hamilton's ranch in Baja Mexico in their truck with all of their hunting and fishing gear. On the way back from the ranch to an Ensenada Gun Club 115 miles away they went missing for 12 hours. The road washed out and they spent the night in a village. They bought lobster from the villagers and cooked them on this stove.

"No I can't prove that but I read about this in a reliable biography. That is why I bought it. Gable's golf clubs recently sold for $16,000. Most of his other stuff goes for over $1,000. I'm listing this for quick sale to someone who wants a cool piece of Gable/Lombard history."

Imagine owning a stove on which Lombard cooked lobster.

Here not only is that letter of authenticity, but the photo of Clark and Carole, eager for adventure: 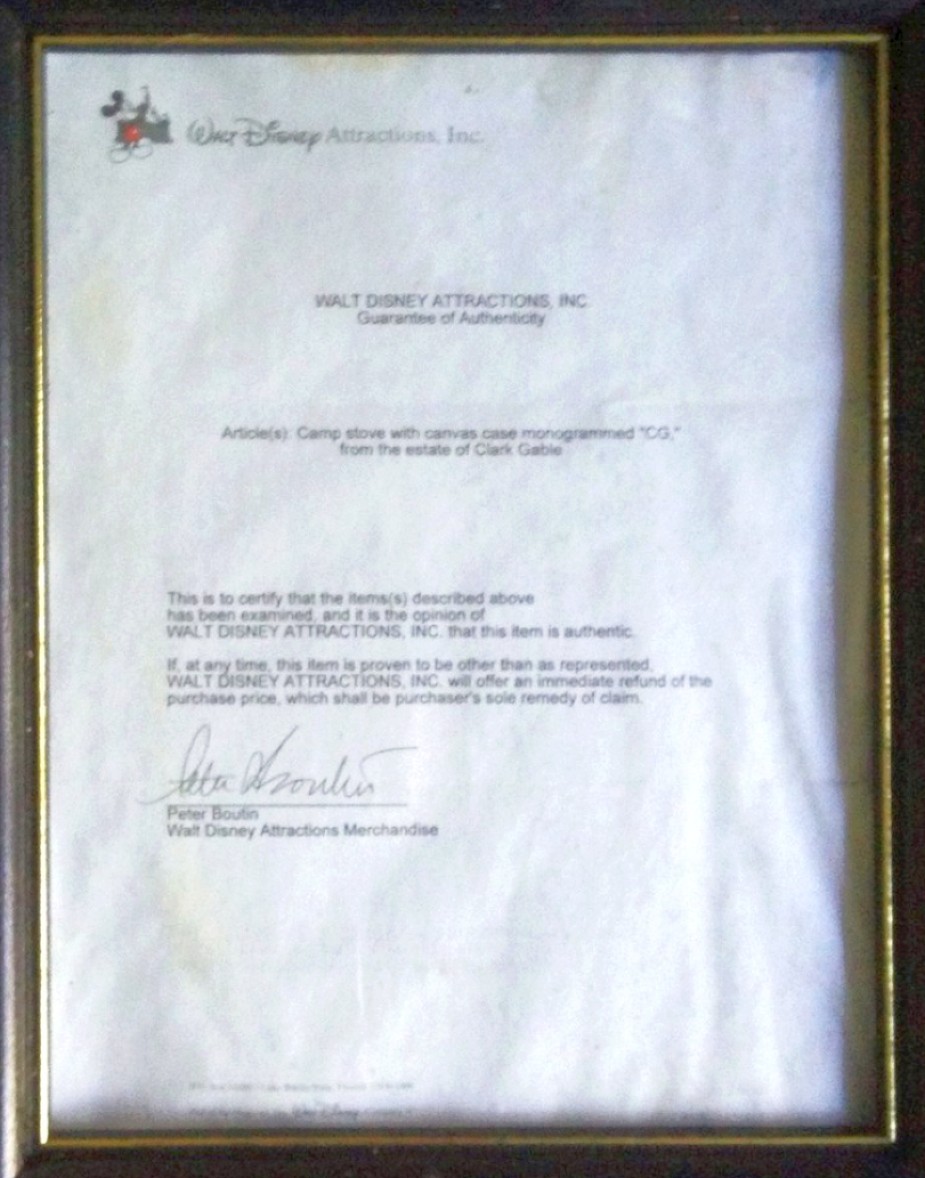 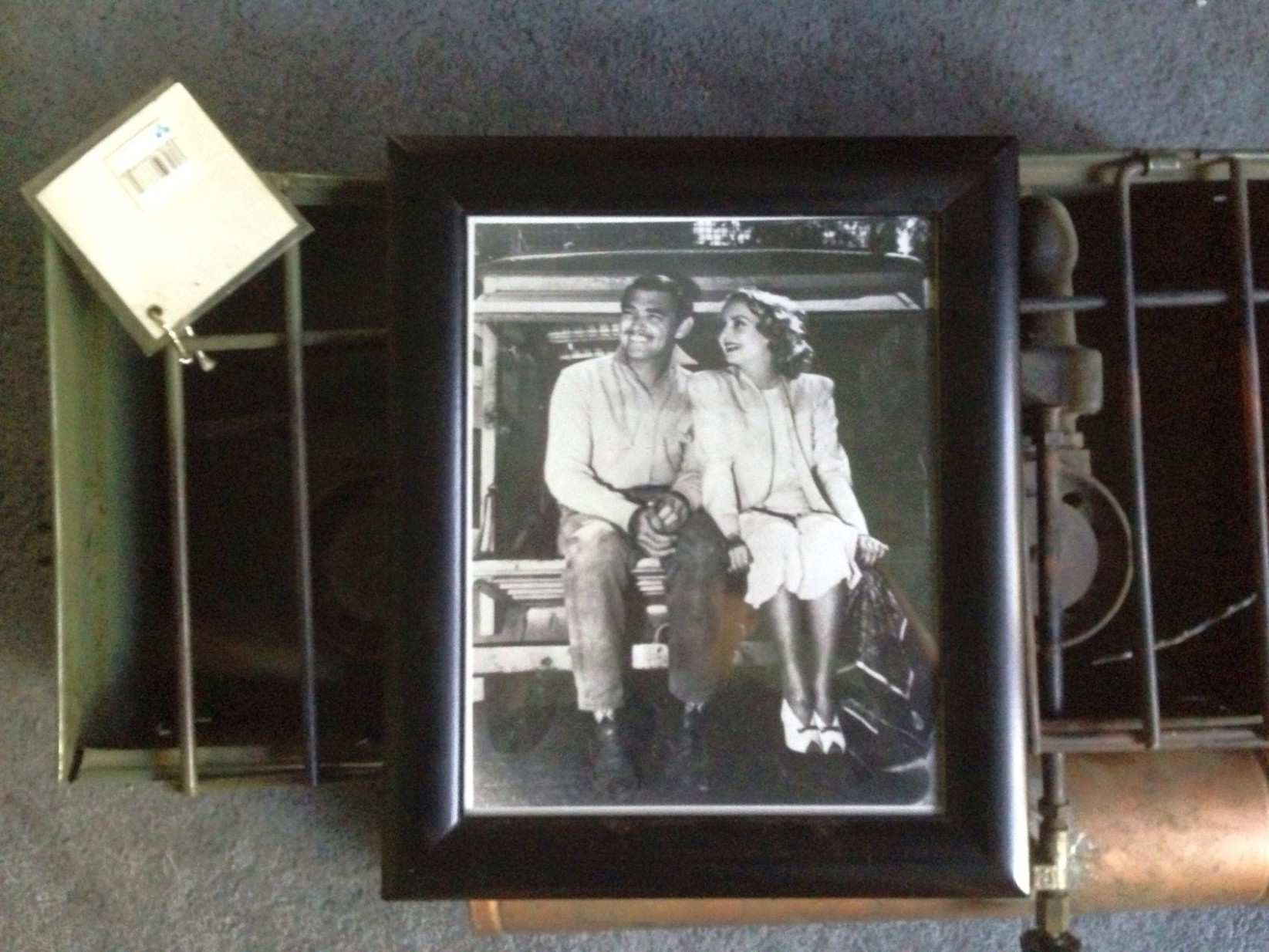 (Oh, and the seller also notes, "This thing is over 70 years old and has wear expected with same." But I honestly don't expect anyone who buys this stove will use it for actual camping.)

The "quick sale" price is $729, although you also can make an offer before the sale's scheduled end at 5:59 p.m. (Eastern) Thursday. Interested in owning this? Then go to http://www.ebay.com/itm/Clark-Gable-Carole-Lombard-camping-stove-Make-an-Offer-/131004366448?pt=LH_DefaultDomain_0&hash=item1e8077fe70.
Collapse