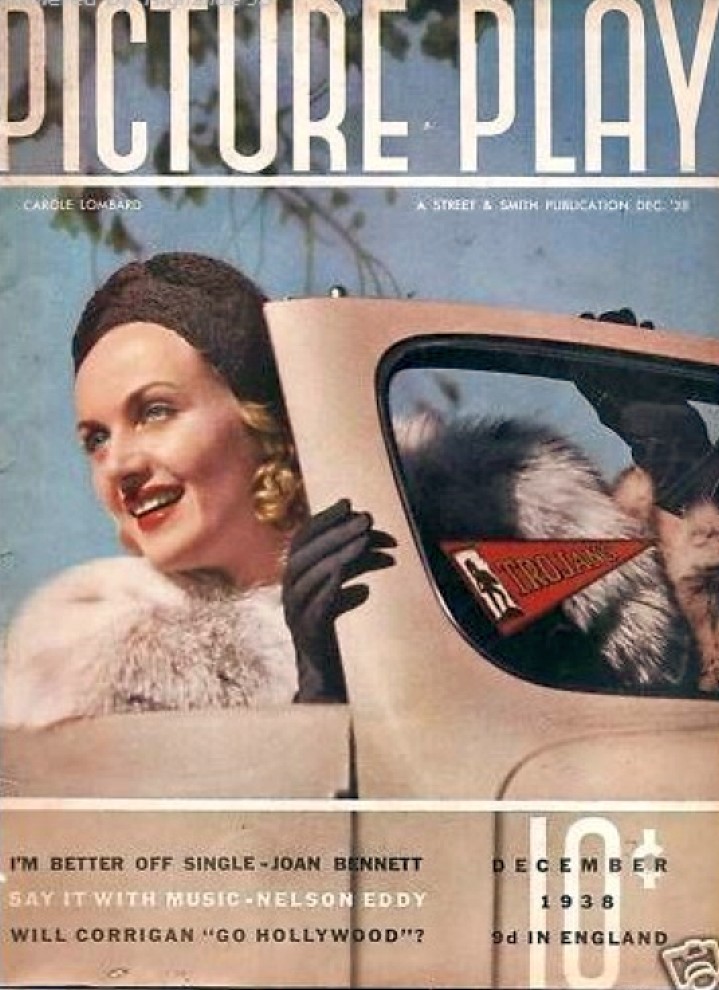 Carole Lombard, sitting in a car, graced the December 1938 cover of Picture Play...but the ostensible reason she was aboard could be found in that little cardinal-and-gold decal in the front window. Carole supposedly was headed down to the Los Angeles Memorial Coliseum to watch the University of Southern California play football.

Lombard was no stranger to football, or the Coliseum; in the mid-twenties, according to Lombard biographer Larry Swindell, she supposedly handed a trophy to the winner of the Stanford-Southern Cal game (the visitors from Palo Alto won in both 1924 and '25). This weekend marks the start of the college football season -- action began Thursday night and continues through Labor Day (heck, today I'll be at Scott Stadium watch the University of Virginia open its season versus visiting Brigham Young) -- and as fate would have it, two vintage college football programs that feature a Lombard advertisement are being sold or auctioned at eBay. The ad is the same in both cases, from Lucky Strike in the fall of 1937: 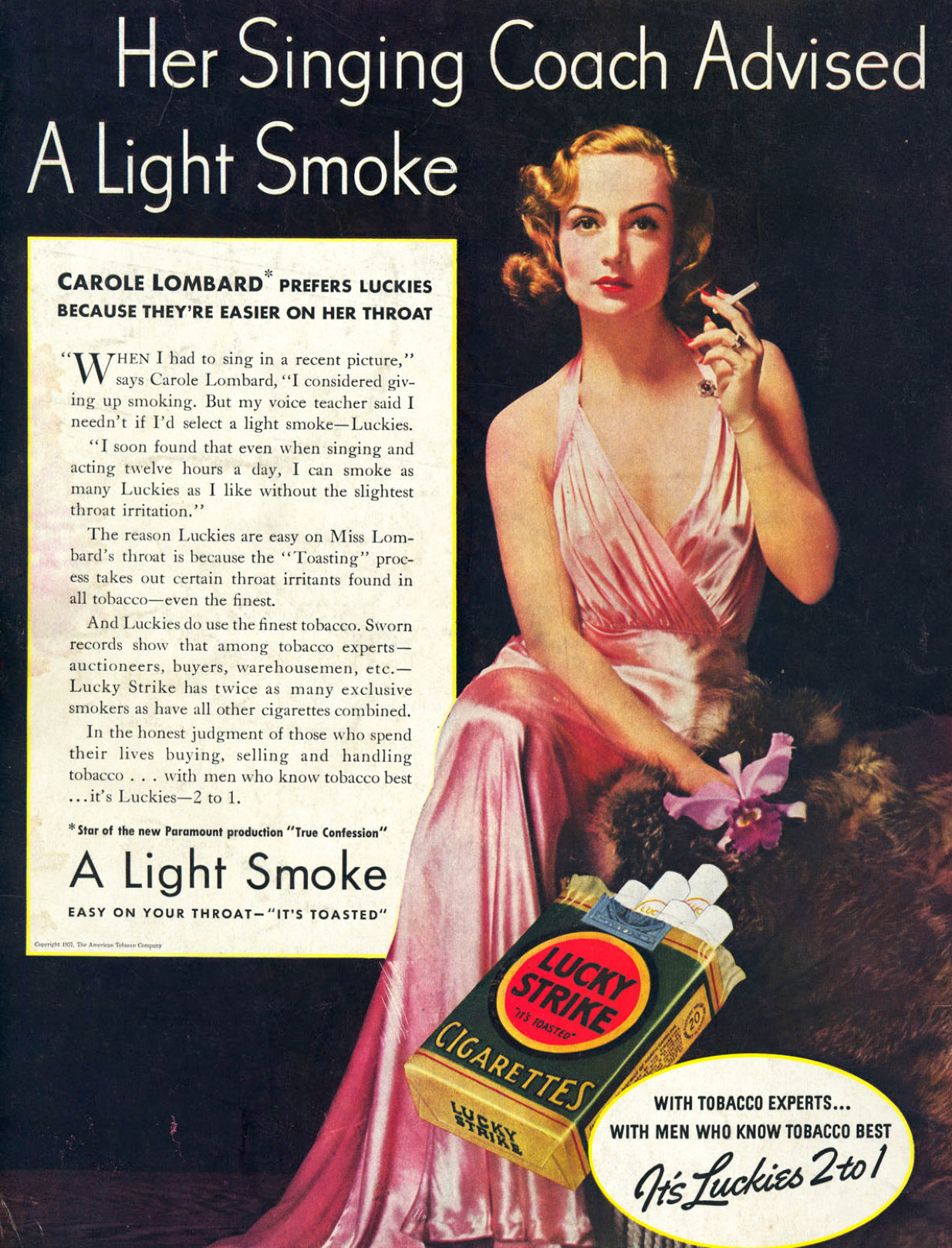 We'll start with the program on sale; it's from Nov. 25, 1937, and despite it being Thanksgiving, it's homecoming for Louisiana Normal against visiting Southwestern. The cover is a bit torn... 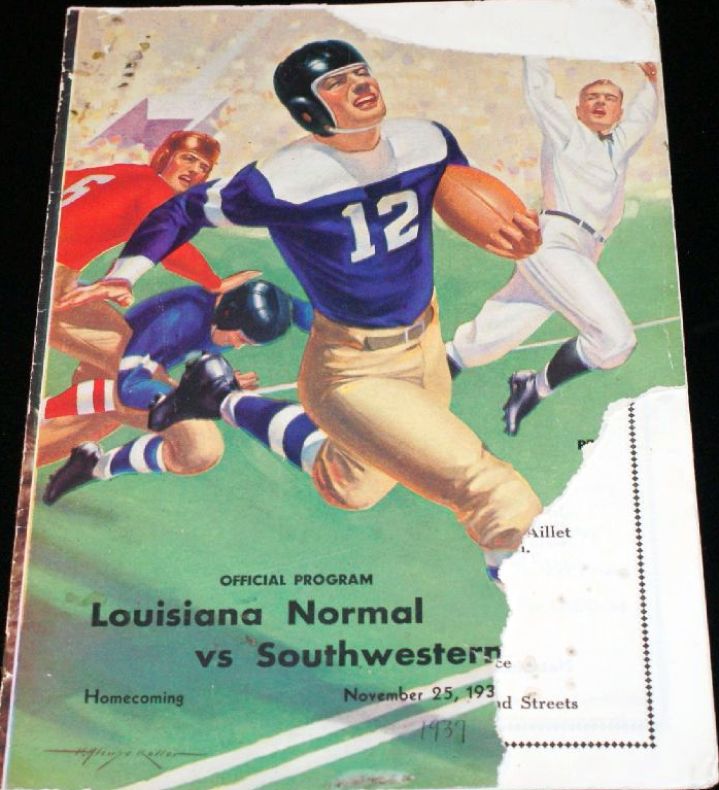 ...but inside, all the players are identified: 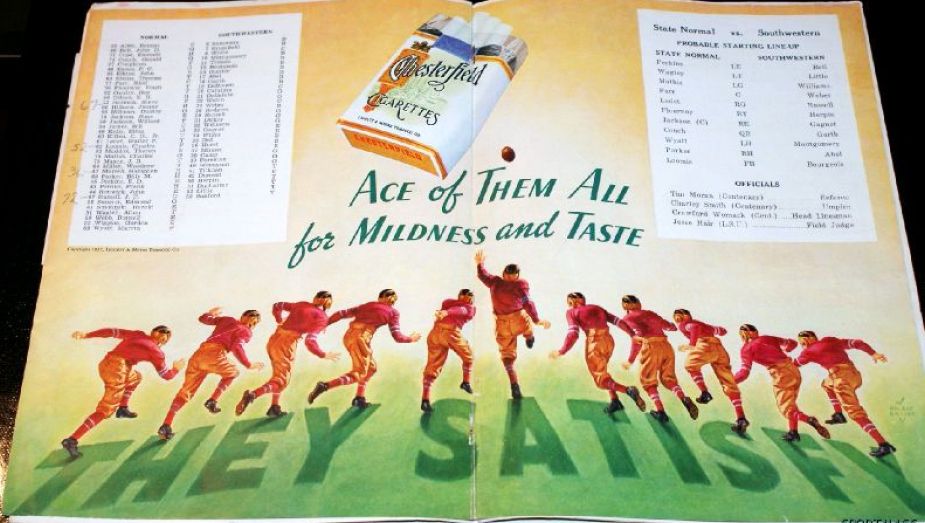 You say you've never heard of these colleges? Well, they're still around, but under different names. "Louisiana Normal" (then a teachers' college), was later renamed Northwestern State University. "Southwestern" was known as the University of Southwestern Louisiana not all that long ago, but it now goes by the University of Louisiana at Lafayette (another UL campus is in Monroe, at the school formerly labeled Northeast Louisiana).

The other program, from Oct. 23, is another intrastate homecoming battle, this between Trinity College of Hartford and Connecticut State, the institution now known as the University of Connecticut (and smarting from a 15-point upset loss to unheralded Towson Thursday night): 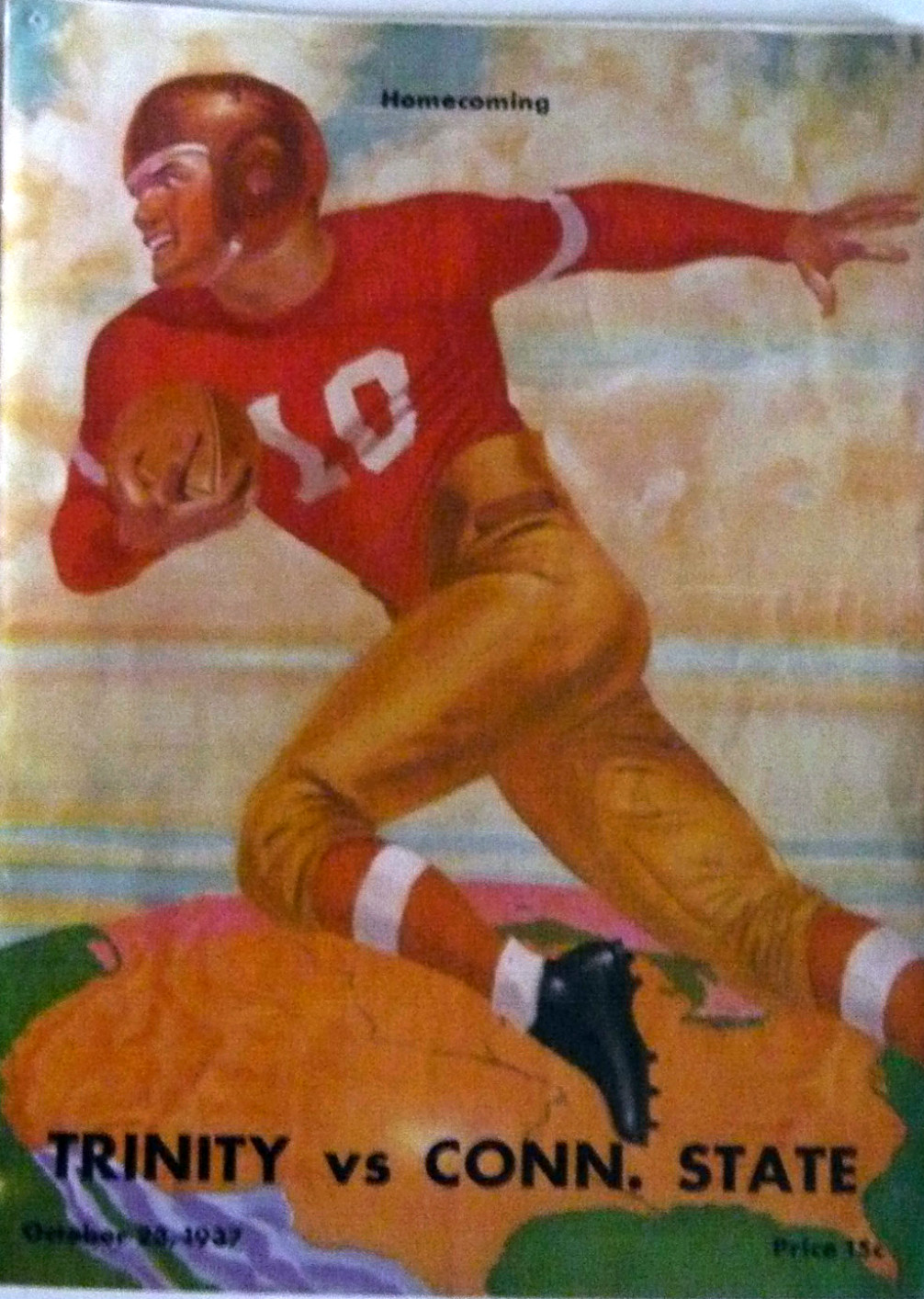 We have some samples of what was inside, including a story of the wide variety of college team names: 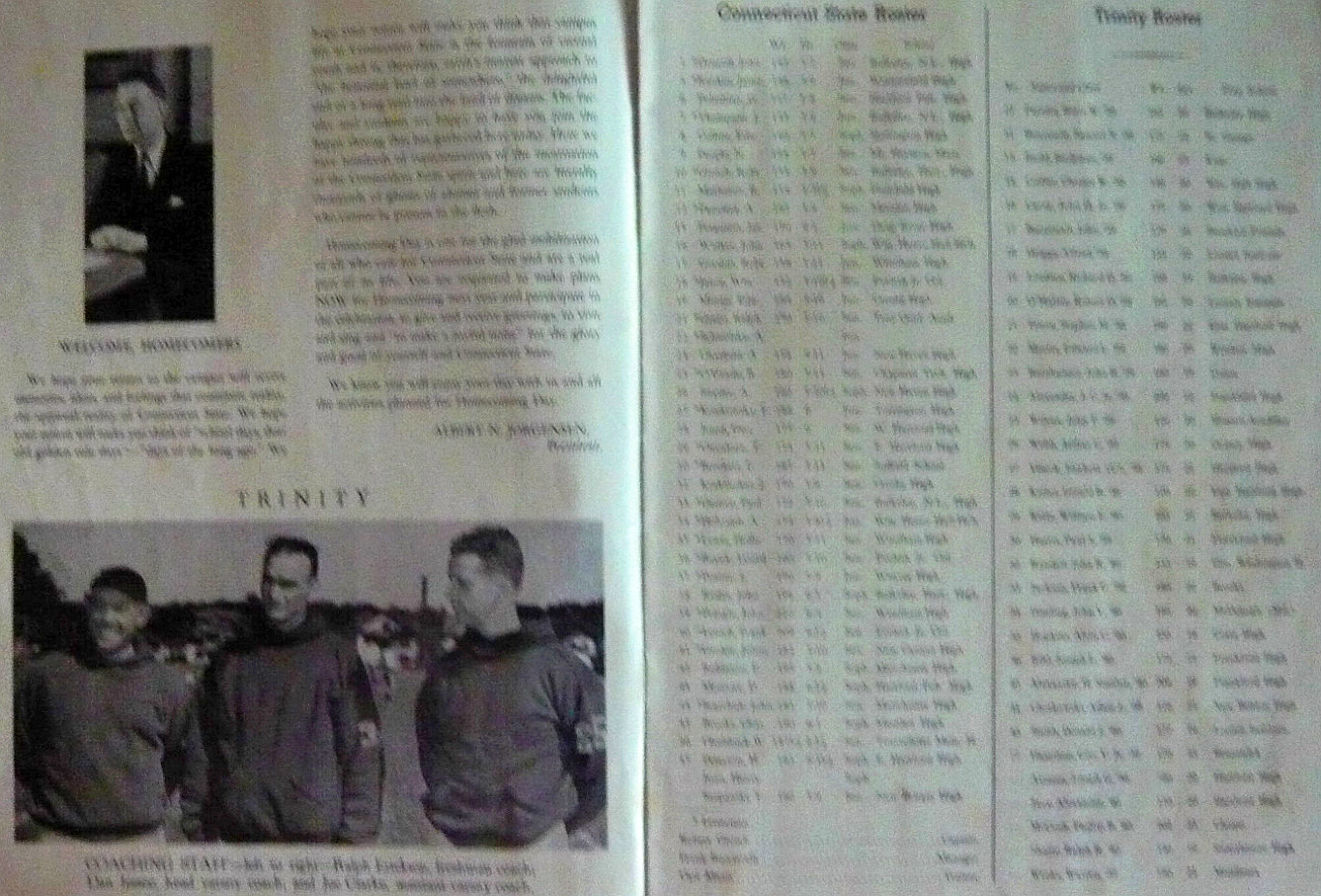 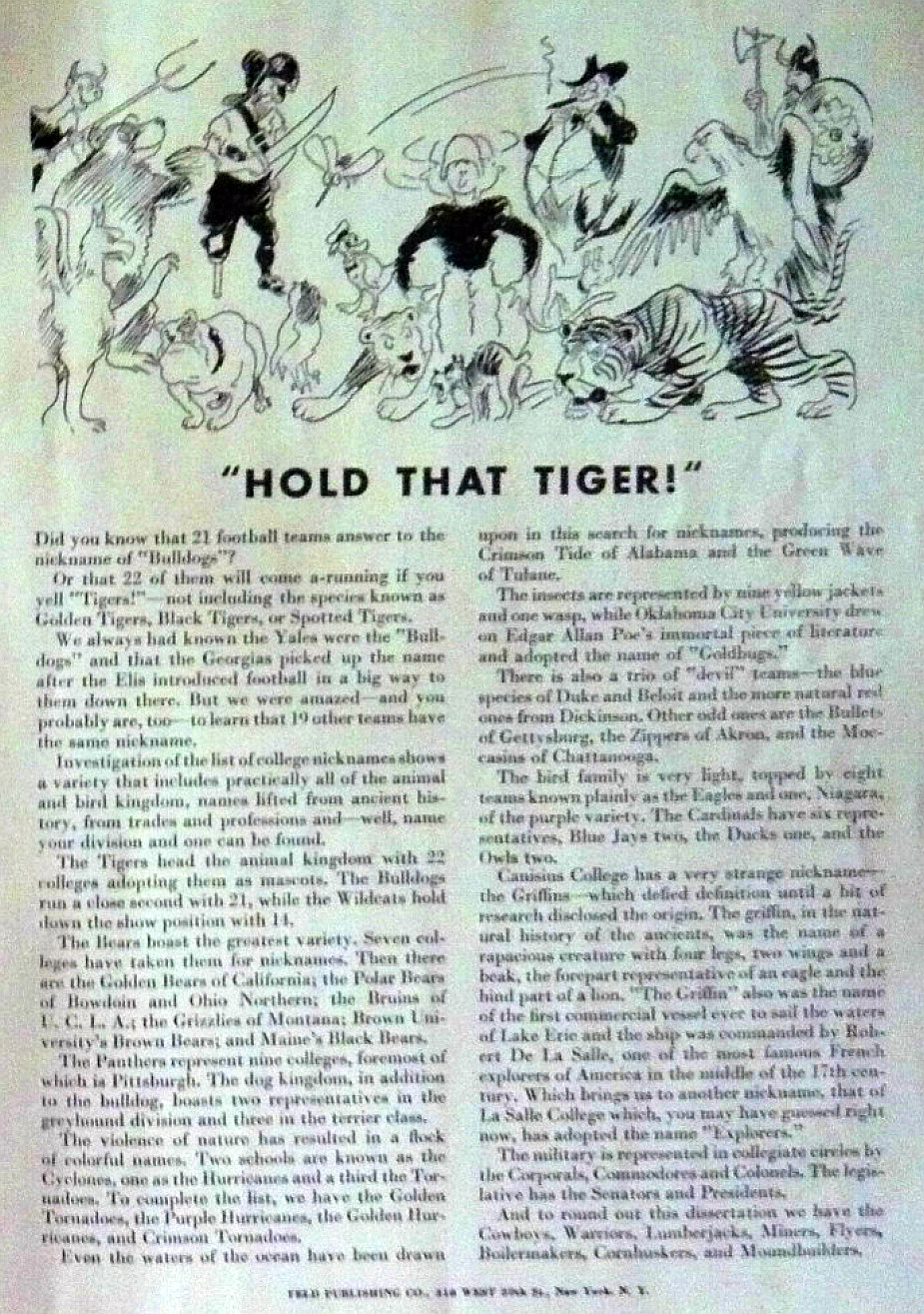 Incidentally, what were Connecticut State's teams called? The University of Connecticut's are called Huskies, probably a tie-in to the school nickname "UConn" (as in "Yukon" -- get it?), but I'm not sure that applied to the earlier years of the institution.

Among the other ads were two for orchestras, one well-known at the time (Isham Jones), regularly performing at the Hotel Lincoln in New York, the other a local outfit (the Connecticut Collegians) on the lookout for dates on the Storrs campus and environs: 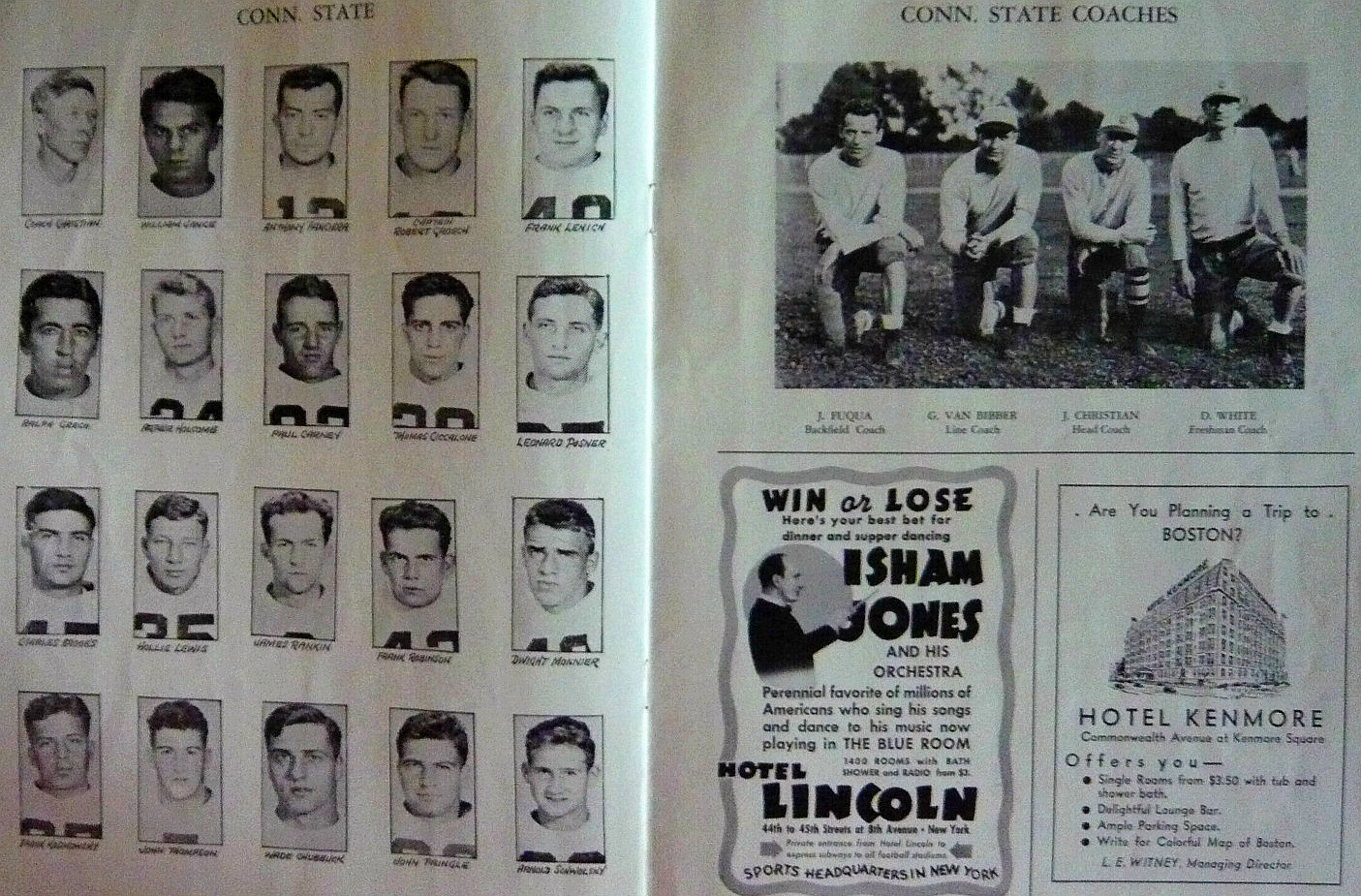 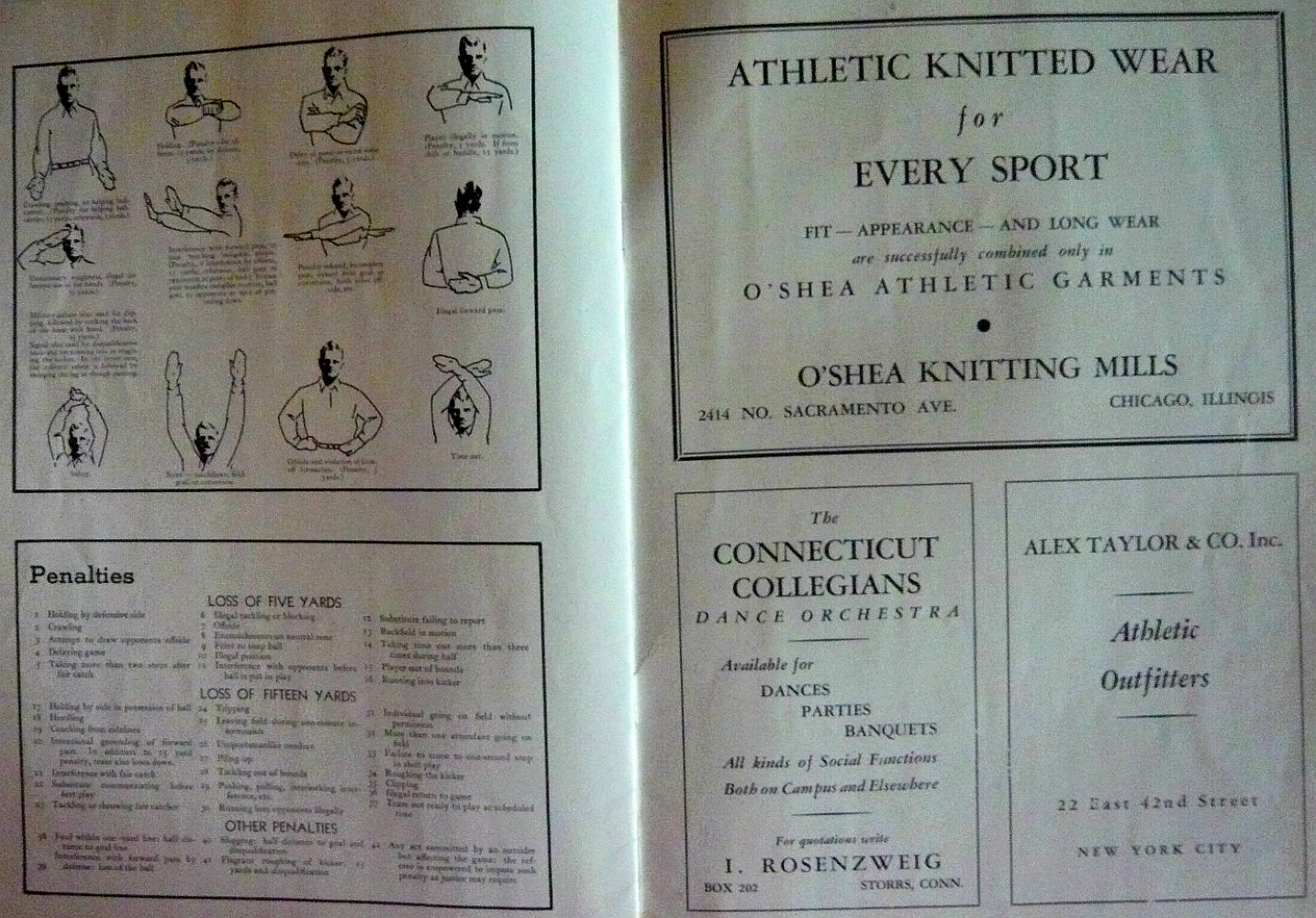 Best wishes to your favorite team this fall...unless they happen to be on the schedule of one of my favorites.
Collapse