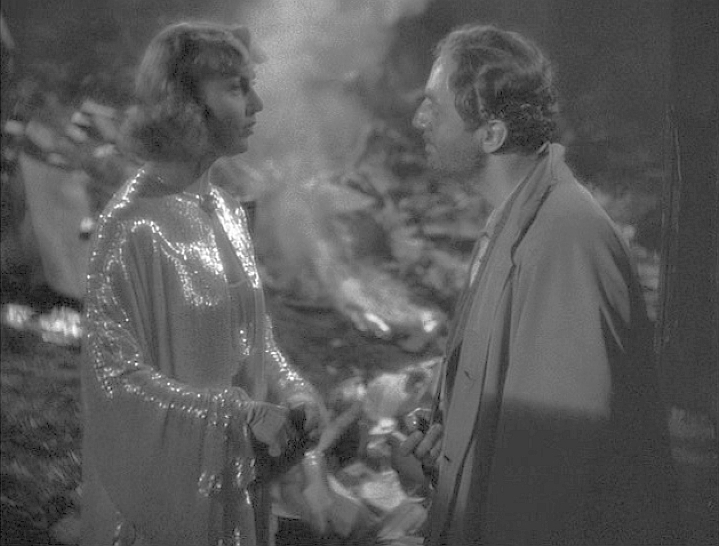 "My Man Godfrey" did wonderful things for Carole Lombard. It provided her with an Academy Award nomination for best actress, it lifted her into the top tier of stars, and made her one of the industry's most bankable actresses. But while Lombard no doubt appreciated "Godfrey's" benefits, she was concerned about one of its potential drawbacks. (Such insecurity is typical of actors; you no doubt have heard the old story about one negative review drawing a stronger reaction than a hundred positive ones.)

Her fear: Being typecast.

Look at it from Lombard's perspective. After several years of effectively wandering in the Hollywood wilderness as an all-purpose player with little distinctive qualities. Carole had drawn critical attention in the spring of 1934 for her turn opposite John Barrymore in "Twentieth Century." That was done on loanout to Columbia, and at first it appeared her home studio of Paramount wasn't paying attention; her next few films continued to meander. Upon becoming Paramount's head of production in 1935, noted director Ernst Lubitsch recognized what Carole had to offer and put her in a first-class vehicle, the critically-lauded romantic comedy "Hands Across The Table." (Lubitsch's short-lived ascension to head of production marked the first and only time a director wielded such power.)

Now, Lombard had struck gold again with "Godfrey"...but she again was digging from the comedy mine. She looked at some of her peers in the industry -- Myrna Loy and Jean Harlow at MGM, Ginger Rogers at RKO, Claudette Colbert and Marlene Dietrich at her home base of Paramount -- and while many were identified as primarily comedic actresses, none were strictly limited to that genre. Yes, Carole enjoyed doing comedy, and had since Mack Sennett days, but she didn't want to be restricted by the cinematic border patrol.

So in May of 1937, which syndicated columnist Robbin Coons asked her to guest-write (or perhaps ghost-write) a column, Lombard had the ideal topic. This is how it ran in the May 30 Portsmouth (Ohio) Times: 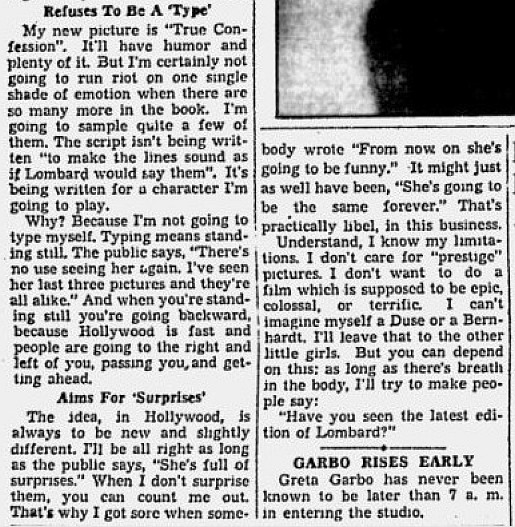 It's interesting that she mentions "True Confession," but has nothing to say about the other Lombard movie released that fall, "Nothing Sacred." (To be fair, by late May 1937 it had not yet gone into production.) Perhaps the ghost-writer, if there was one, hailed from Paramount's publicity office. Carole's comments about being "full of surprises" are indicative of her shrewd sense of public relations, and the note about knowing her limitations played to her distrust of putting on airs.

As things turned out, the critical brickbats she received for the weak "Fools For Scandal" in the spring of 1938 led her to go in a non-comedic direction, not returning to laughter until "Mr. & Mrs. Smith" in early 1941.
Collapse