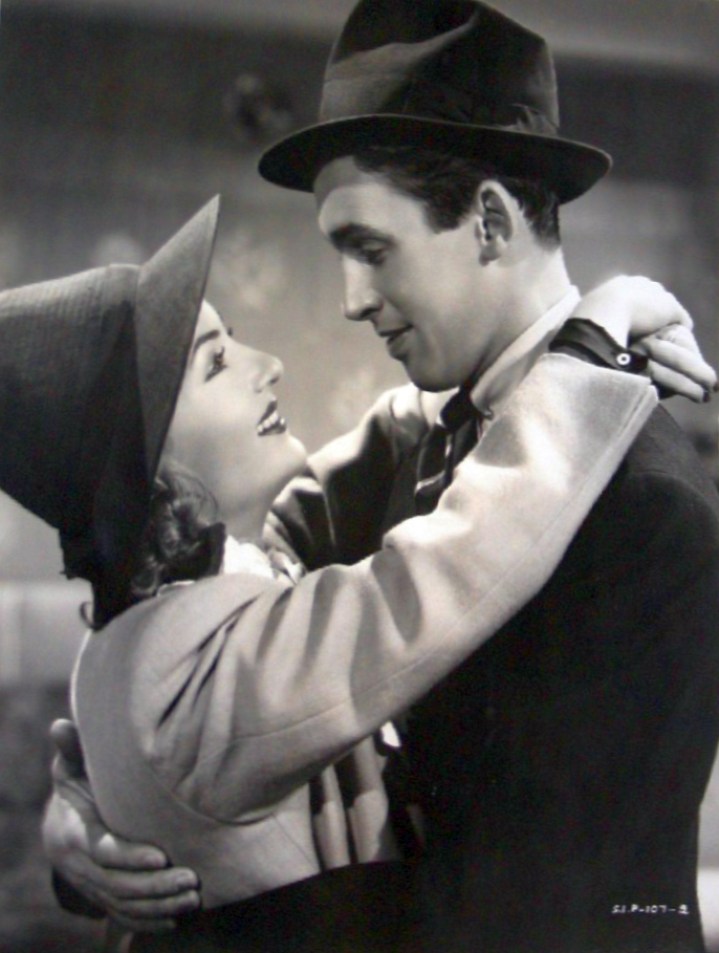 Two vintage images of Carole Lombard with her leading men are up for auction at eBay. We begin with Lombard and James Stewart, from "Made For Each Other"...along with a snipe on the back from Russell Birdwell and Selznick-International Pictures: 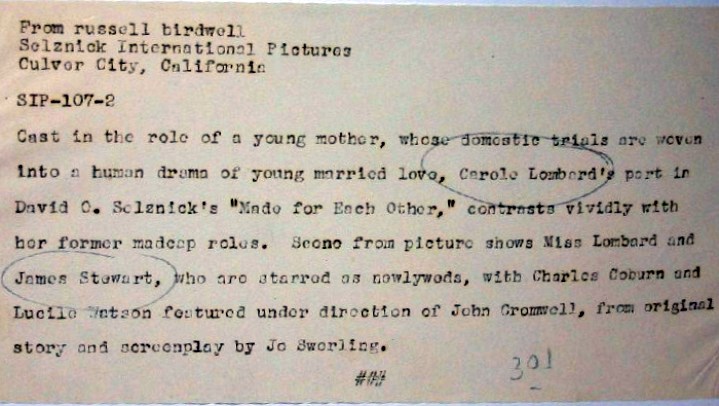 It's an 8" x 10" single-weight glossy in near mint condition (minor edge wear). The minimum bid is $99.99, and bidding closes at 8:16 p.m. (Eastern) Wednesday. If this strikes your fancy, you can bid or get additional information by visiting http://www.ebay.com/itm/CAROLE-LOMBARD-AND-JAMES-STEWART-VINTAGE-8X10-PHOTO-MADE-FOR-EACH-OTHER-W-SNIPE-/200936570527?pt=LH_DefaultDomain_0&hash=item2ec8c0be9f.

Lombard's leading man in the other pic isn't as well remembered today... 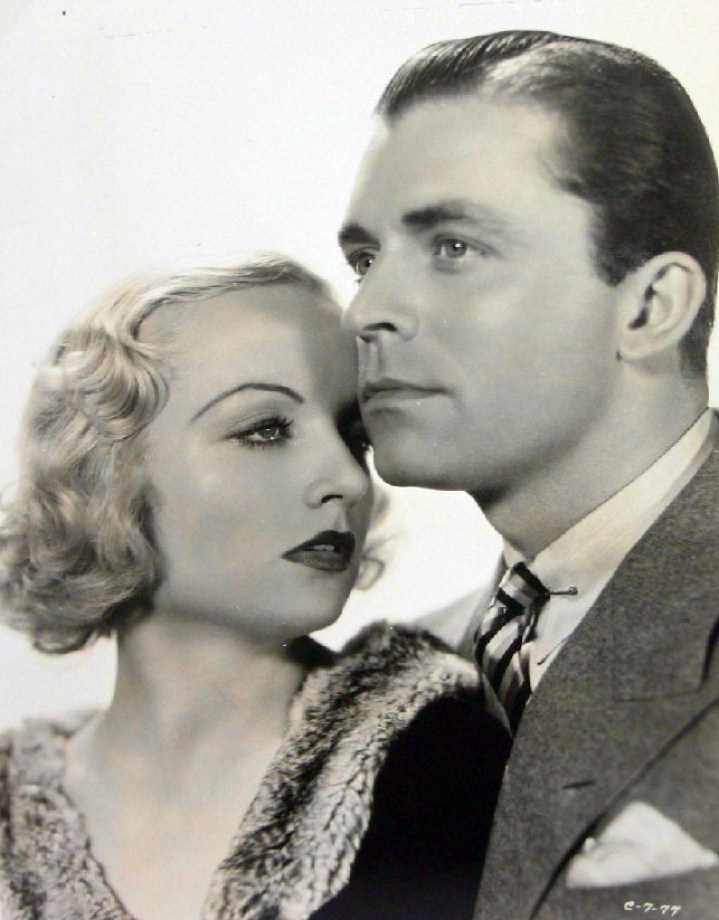 ...but he's been getting more attention of late, thanks to his daughter. He's Lyle Talbot, whose daughter Margaret Talbot has written a terrific book about him called "The Entertainer" -- not a strict biography per se, but a book that examines his life in the entertainment industry, from traveling carnivals and theater to films and TV (http://carole-and-co.livejournal.com/554537.html). Lyle's identified on the back of the photo... 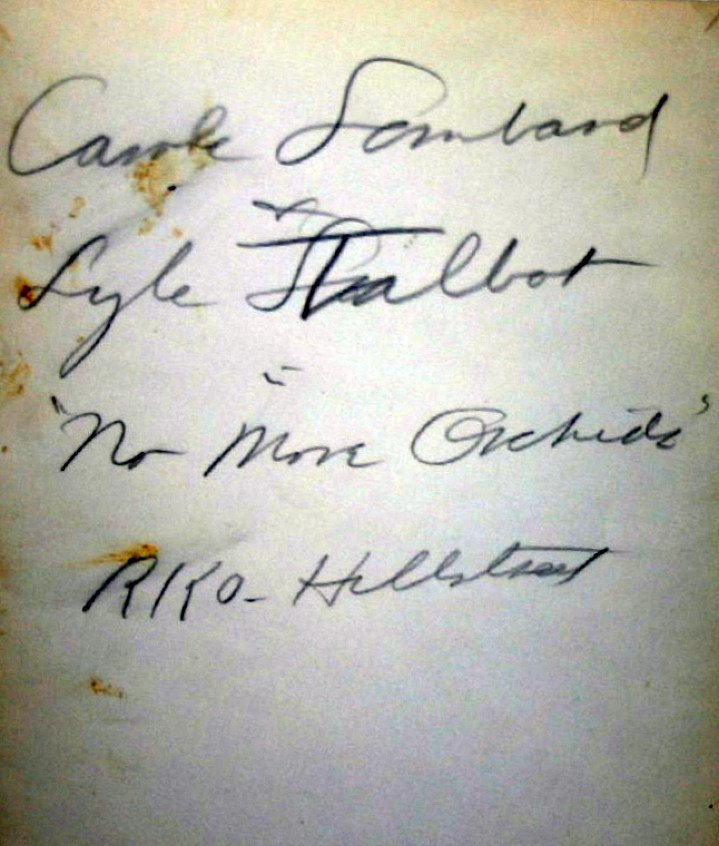 ...but what's "RKO" doing there? "No More Orchids" was a Columbia production. A look at the following word -- "Hillstreet" -- provides the answer.

The RKO Hillstreet was a theater in downtown Los Angeles, located on 801 South Hill Street, a few blocks south of Pershing Square. (The picture was probably used in a local newspaper or other publication, though there's no hint as to which it might have been.) The Hillstreet opened in 1922 on the RKO vaudeville circuit, then switched to movies (with occasional stage shows) a few years later. Designed in the Gothic style, it seated 2,890 and had the same luxuries as most downtown palaces of the era: 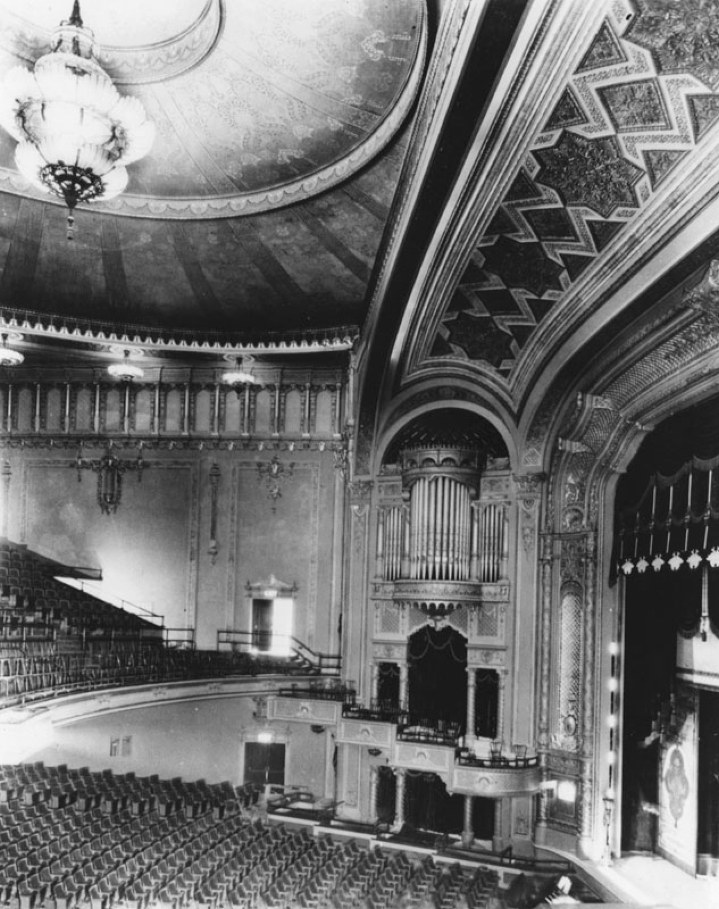 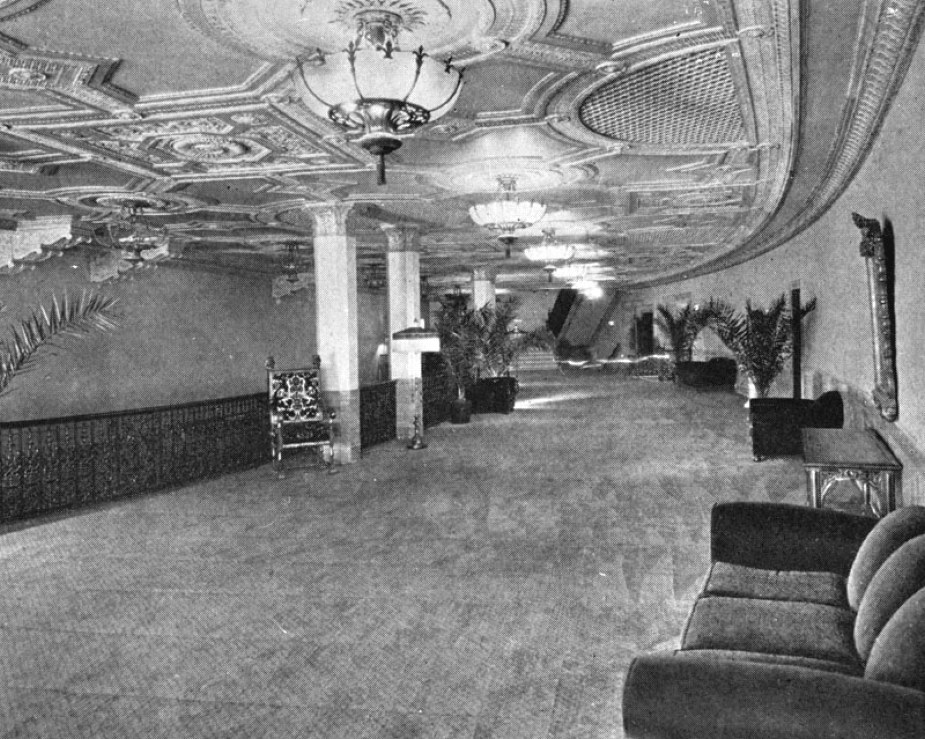 We know at least two other Lombard movies played at the Hillstreet -- "Ned McCobb's Daughter" (this looks to be from early 1929, as there's a reference to a Mack Sennett talkie)... 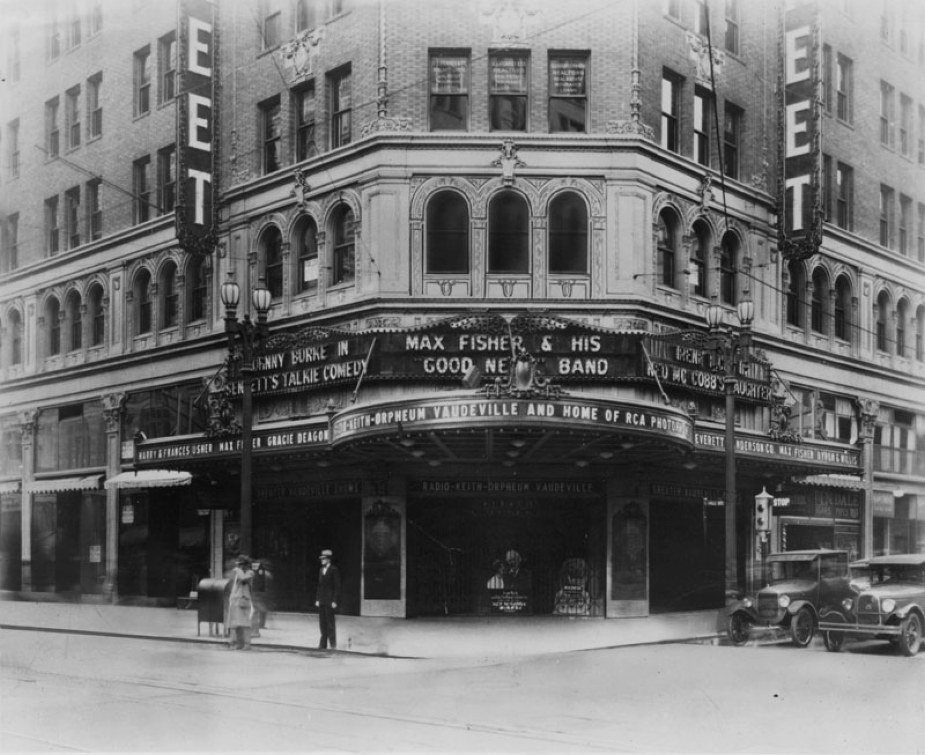 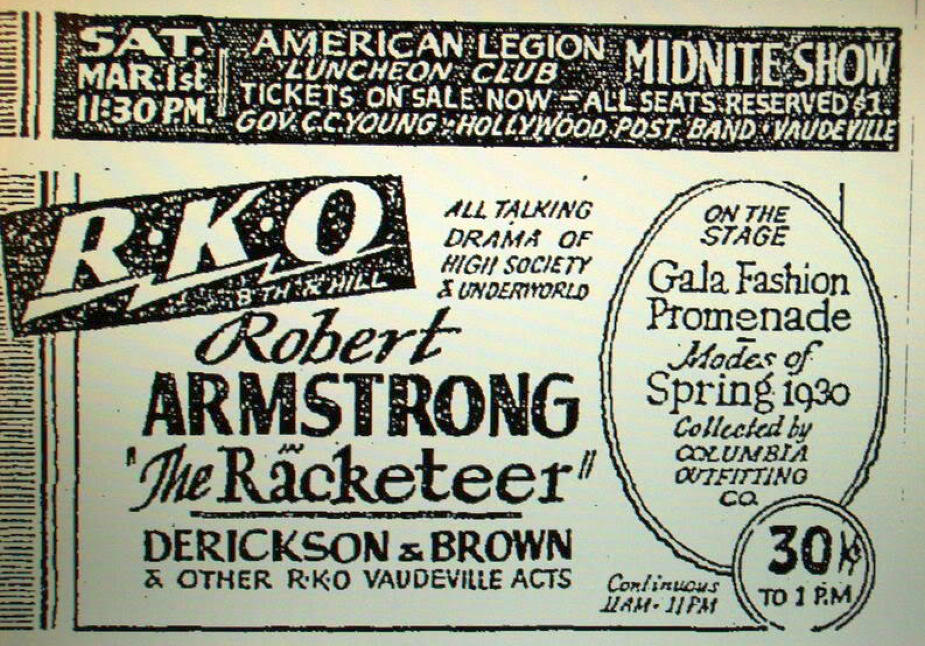 After World War II, the Hillstreet was redesigned in a Moderne style, including a new marquee, as shown by these images from 1947 (top) and 1953: 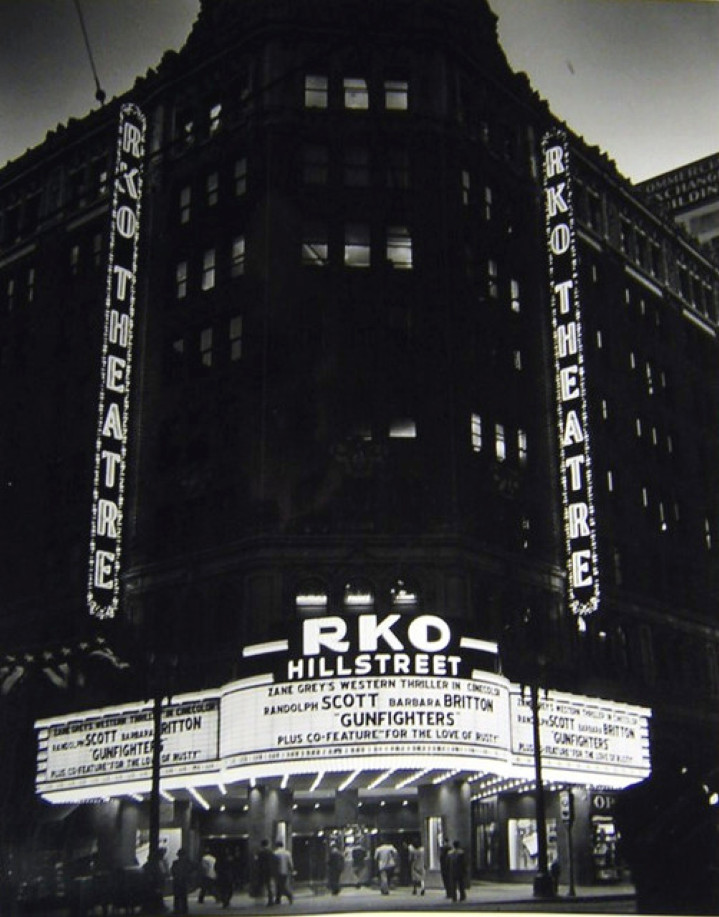 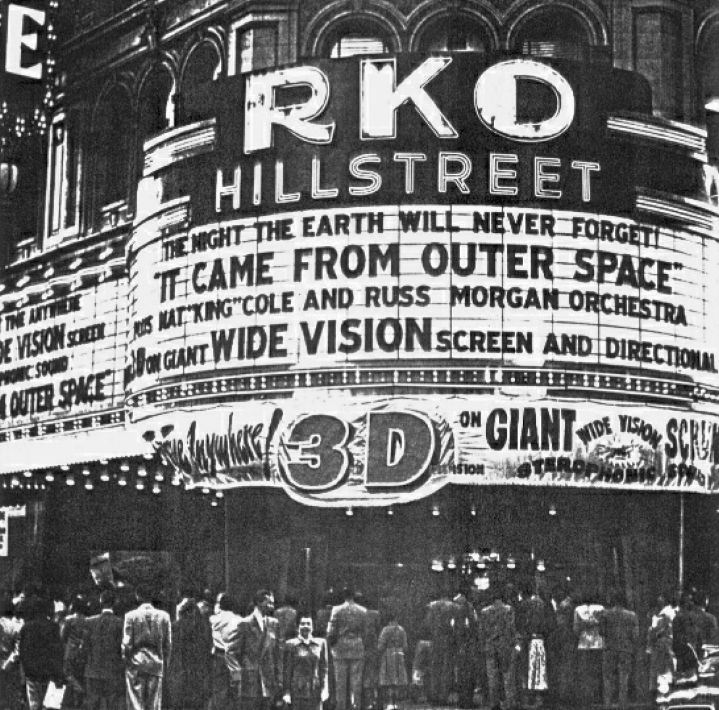 But they wouldn't last. While many Los Angeles film palaces went untouched by urban renewal as developers went into the San Fernando Valley and Orange County, the Hillstreet wasn't so fortunate. It temporarily closed in April 1963, opened again for a while, and then was demolished in early 1965 to make way for a parking garage.