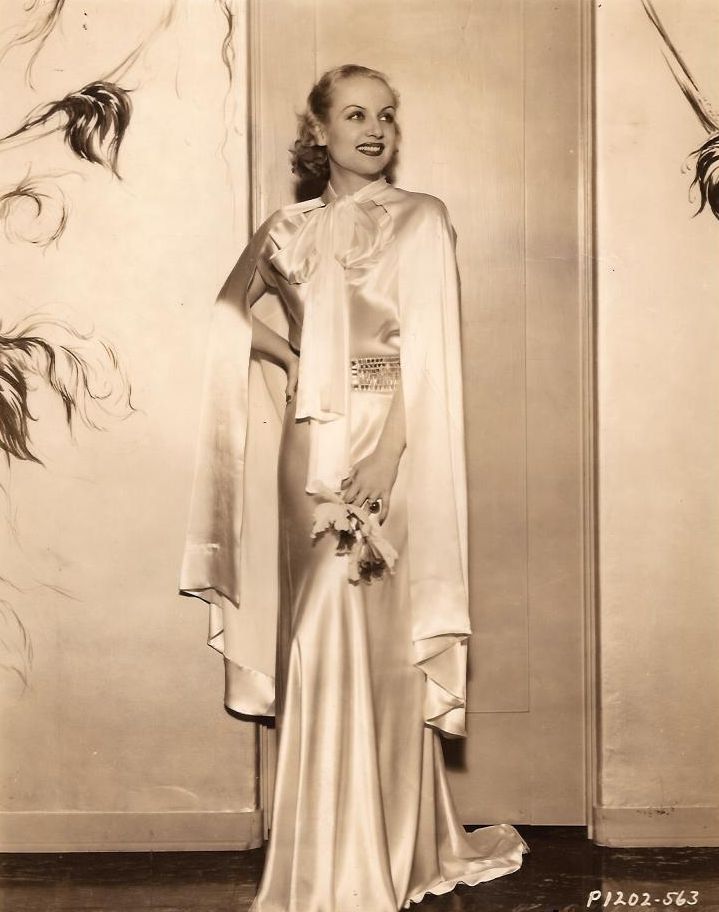 Actresses of the classic era did plenty of self-examination, and Carole Lombard, shown in Paramount p1202-563, was no exception. Current actresses likely do so today, the difference being that their observations are recorded on blogs or Twitter feeds, not in fan magazines read by hundreds of thousands -- such as the September 1934 issue of Motion Picture, with Warners fave Glenda Farrell on the cover in a Marland Stone portrait: 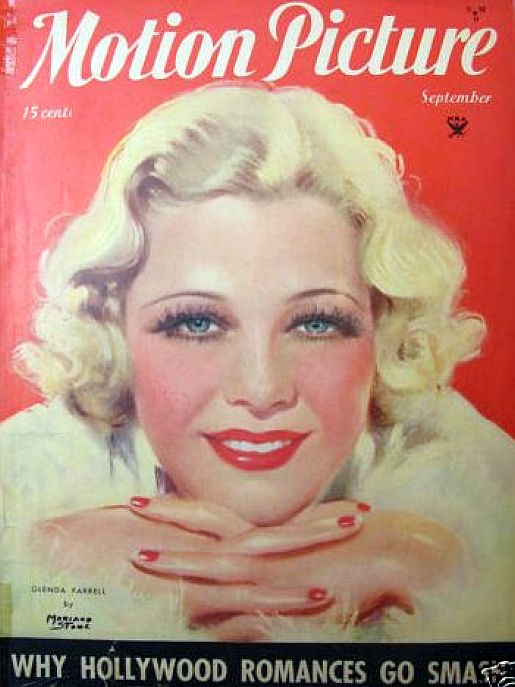 Inside, Carole told writer Elizabeth Goldbeck how acting had changed her...and despite the picture on the story's front page, it was not by increasing her wingspan: 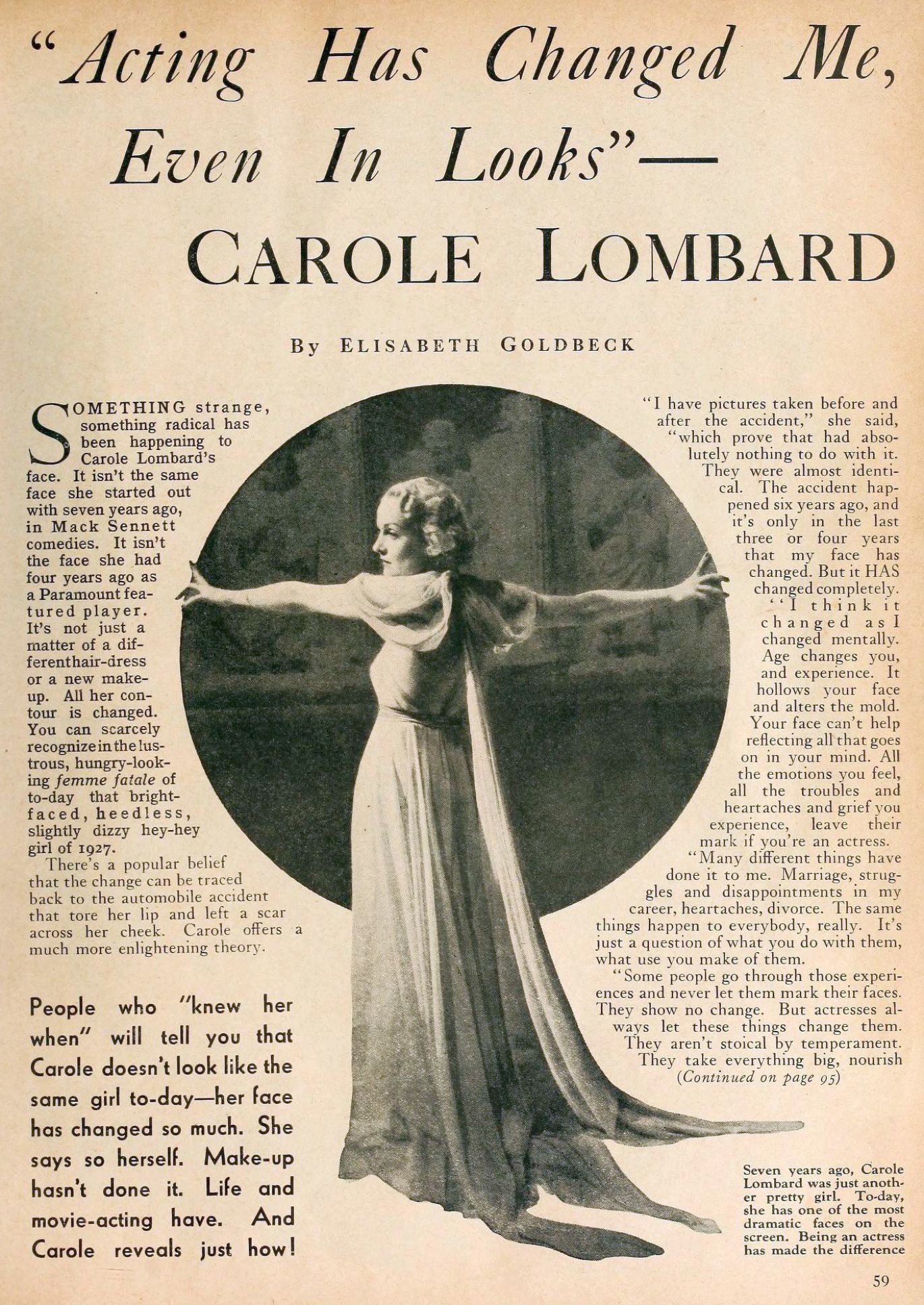 Lombard (or Goldbeck, trying to capture her thoughts -- the long passages make it doubtful Carole was quoted verbatim) noted her facial looks had changed, but said "it's only in the last three or four years that my face has changed. But it has changed completely." She credited it to age and experience.

It's interesting to see Carole comment on other actresses, noting how experience had changed them. "Look at Joan Crawford, Norma Shearer, Dietrich -- all the big stars have weathered that dangerous stage and gone on beyond it to something better, more arresting and challenging." But later, she further comments about one of the actresses mentioned above, her old Cocoanut Grove dance rival; it could be construed as a dig, but I don't think that was her intention, but rather the challenge for an actress to appear natural:

"Joan Crawford, in trying to improve herself, went much too far at one time, and became absolutely grotesque in make-up, and studied so hard that there was no spontaneity left in her. But she's working out of that now into a combination of the new polish and the old naturalness."

One's tempted to believe Lombard was referring to Crawford's appearance in "Rain," where she played South Seas prostitute Sadie Thompson...

...but Carole probably knew that look was a requirement of the role. One wonders of Lombard's reaction had she lived to see the more severe postwar Joan of "Mildred Pierce" and "Humoresque."

That brings us to the final few paragraphs, where Carole touches on a frequent theme of her '30s fan magazine interviews -- her lack of fear of growing old, and how society had made things easier for women by giving them options beyond exhibiting their sexual power.

Lombard's elsewhere in the magazine, part of a story called "Why Hollywood Romances Go Smash." With a title like that, it sounds as if was written by the Incredible Hulk, but no; its author was Joan Standish, who probably didn't moonlight as She-Hulk: 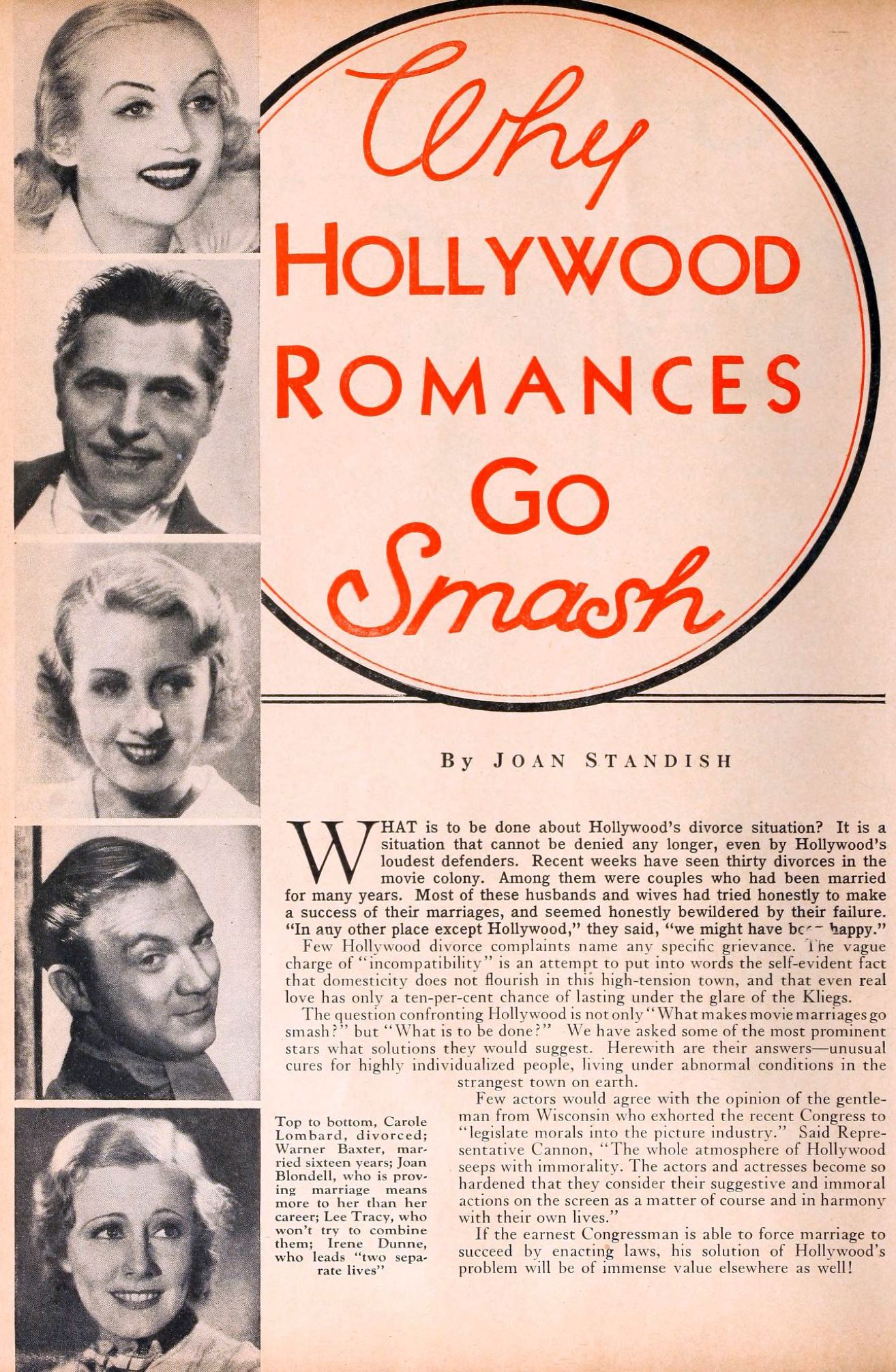 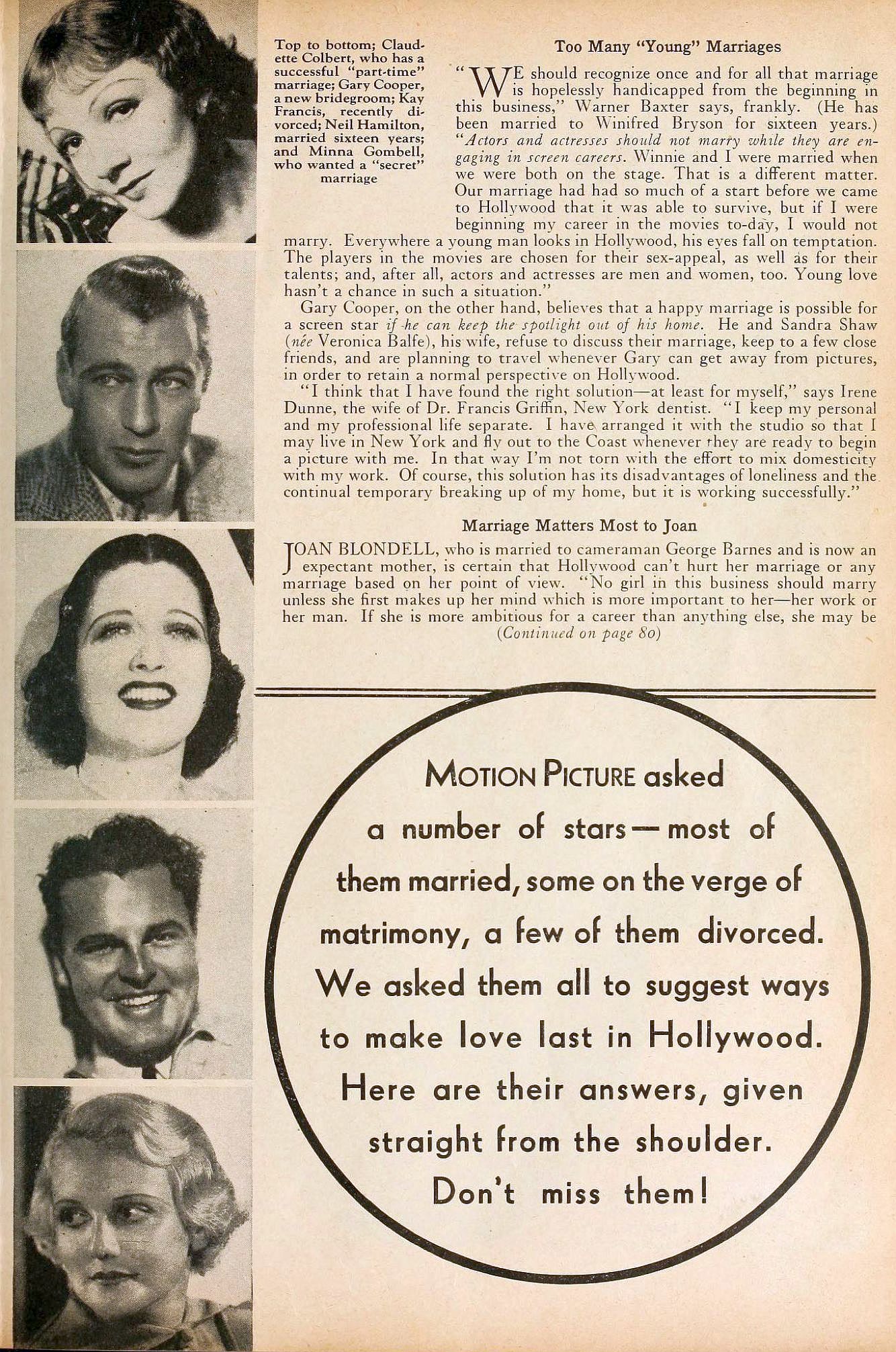 Carole contended marriage needed to be modernized...though she made it a point to note that she wasn't endorsing free love: 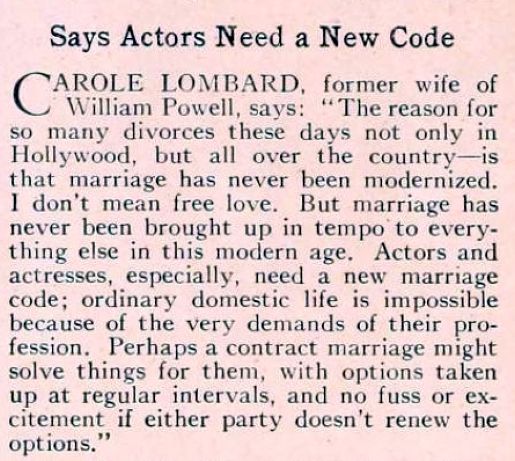 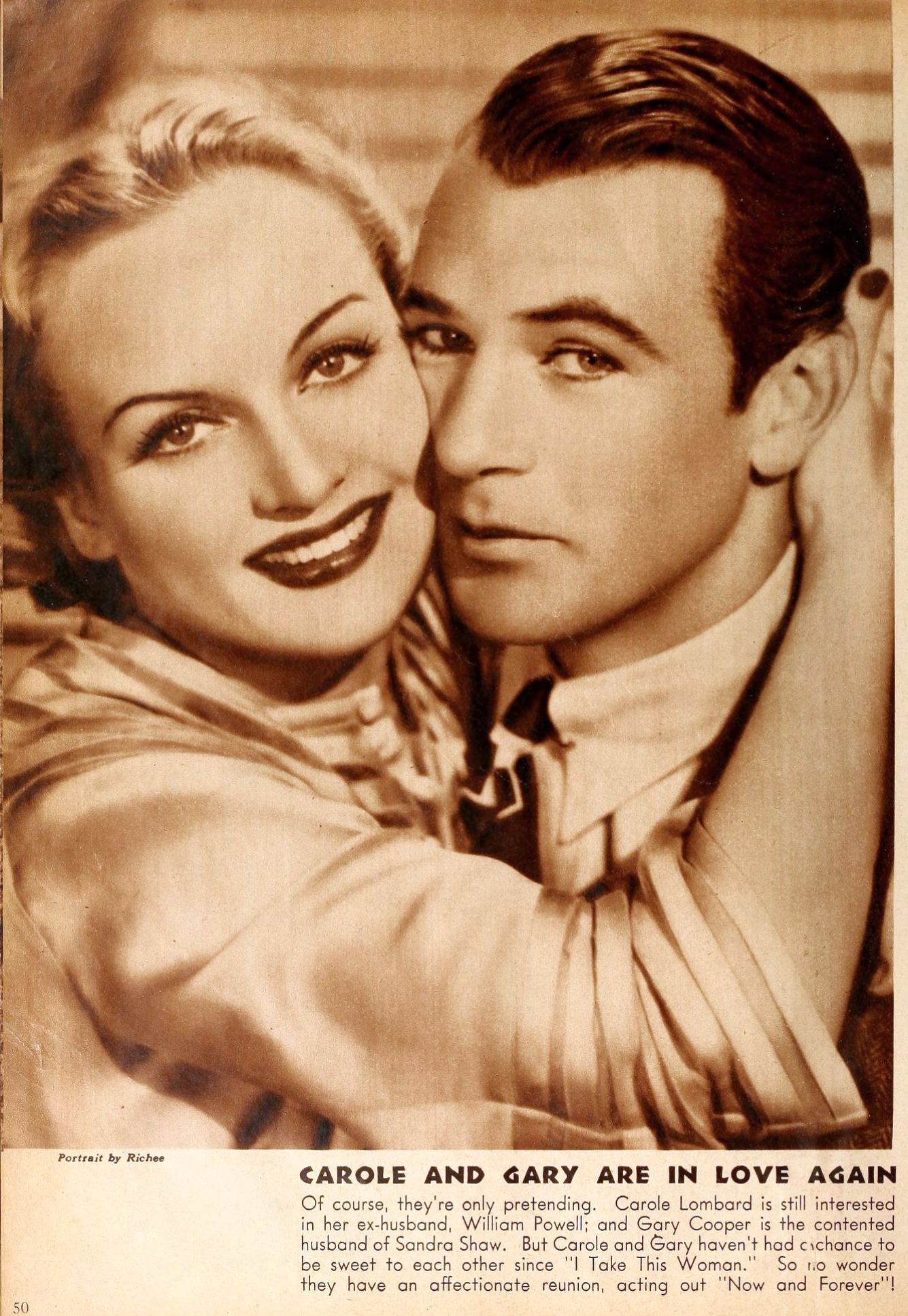