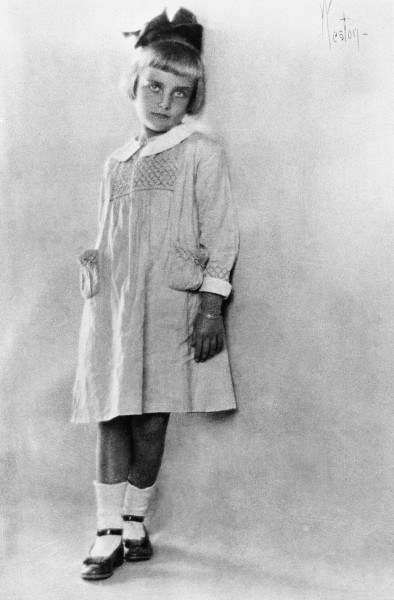 The seed that grew into Carole Lombard was planted into little Jane Alice Peters before she and her mother and brothers left Fort Wayne, Ind., for California in the fall of 1914. It took root in the theaters of Fort Wayne, where Jane and her family would watch this new, rapidly maturing entertainment known as motion pictures.

The movies of this era were still in a technical infancy; while southern California was increasingly seen as the best place to produce such work, the concept of "Hollywood" had yet to be fully accepted, and Los Angeles shared honors as a film-making capital with New York and nearby New Jersey, Chicago, Jacksonville, Fla., and pockets of northern California.

But one production that took place nearly a century ago not only helped put Los Angeles and Hollywood in the forefront of film production, but pioneered the cross-promotion of movies with other media. And it was with a production that enthralled 5-year-old Jane Alice and millions of other Americans.

It was a serial called "The Adventures Of Kathlyn," starring a lissome, Montana-born blonde named Kathlyn Williams. 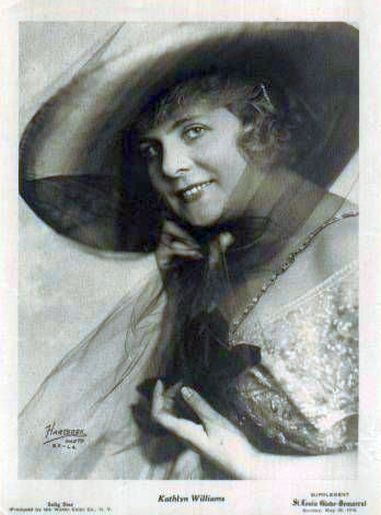 Born in 1879, Williams moved to Chicago soon after the turn of the century to pursue a career in theater. She had some success on stage, but came into her own after joining the Selig Polyscope Company to make films in 1908. Transferred to its growing Los Angeles branch in 1910, she became one of the troupe's better-known actresses.

Three years later, Col. William Selig (the title was self-given), the company's owner, decided to create a serial, in itself not a new concept. What differed "The Adventures Of Kathlyn" from its predecessors was that each two-reel "chapter" was left unresolved -- making it the first "cliffhanger" serial -- and that the series would be cross-promoted through newspapers, which at the time drew a more upscale clientele than did the movies. Selig signed a deal with the Chicago Tribune syndicate; other papers that ran "Kathlyn" installments, tied into advertising for the series, included the New York Sun, Atlanta Constitution, Detroit Free Press and Los Angeles Times.

The first of 27 episodes -- a three-reeler -- hit several big-city movie theaters at the tail end of 1913, with the initial print installment on Sunday, Jan. 4, 1914. Selig also reportedly created the first "trailer" to promote the series.

"The Adventures Of Kathlyn" turned out to be a sensation. Audiences, fueled in part by the print serialization, came by the droves to attend each new chapter. Here's an ad Selig ran in one of the trade papers in May 1914, followed by an ad in the Chicago Tribune: 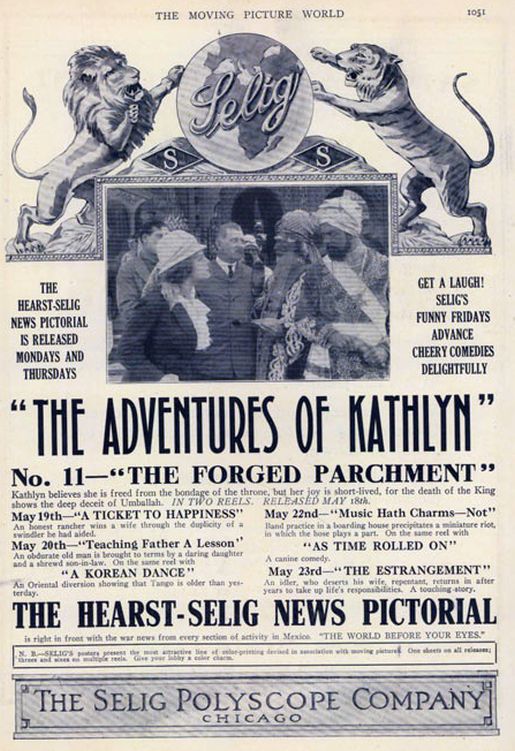 Note the lion and tiger atop the Selig seal; Selig owned an array of wild animals (who eventually became the basis for the Los Angeles Zoo), and Williams was frequently seen on screen with the menagerie, gaining the sobriquet "Kathlyn the unafraid":

Eventually, some 200 newspapers ran "Kathlyn" serializations, and they eventually were compiled into a novel: 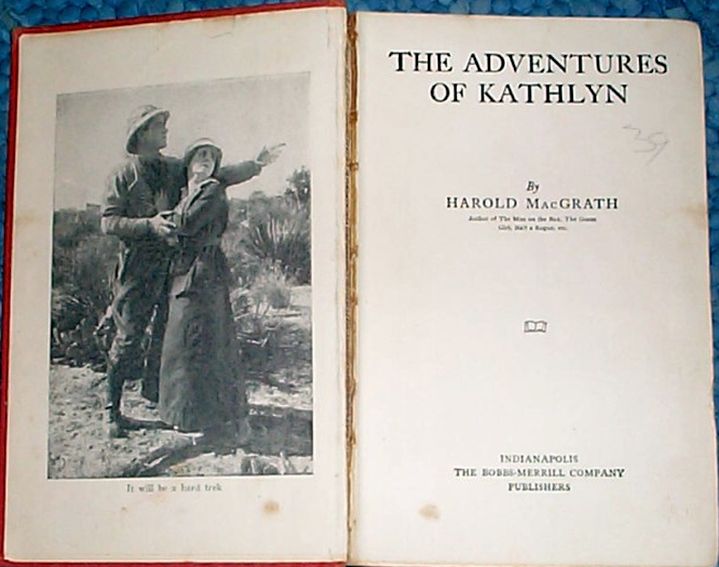 At the Los Angeles history blog "The Daily Mirror," Mary Mallory wrote that items named in honor of either the serial or Kathlyn Williams herself included "a cocktail, face powder, perfume, slippers, shirtwaist, cigar, hair-dress, a baby elephant, puma, lion, the song, 'Kathlyn, Dear Kathlyn,' the 'Kathlyn Hesitation Waltz,' written by Lee Orean Smith, the Kathleen pool at the Selig Zoo, a watch charm for single men, and five babies" (http://ladailymirror.com/2013/06/03/mary-mallory-hollywood-heights-adventures-of-kathlyn-hollywoods-first-cross-promotional-stunt/). And keep in mind that Williams was 35 when "The Adventures Of Kathlyn" turned her from an actress into a celebrity.

So what was it about this serial that excited Jane Alice Peters and countless others 99 years ago? We may never know the answer. Save for the first chapter and assorted fragments, "The Adventures Of Kathlyn" has been lost to history. (That initial chapter was shown at the Academy of Motion Picture Arts and Sciences several years ago as a salute to early Los Angeles film production, but it has never been made available online.)

Williams should not be labeled a "serial queen"; unlike her better-known contemporary Pearl White, who followed the famed serial "The Perils Of Pauline" with "The Exploits Of Elaine," she never made another serial (although she starred in a 1916 feature version of "The Adventures Of Kathlyn," also lost). But she appeared, and starred, in a variety of films, though by decade's end Selig was losing ground to larger, better-financed rivals.

Williams continued acting, resurfacing at MGM in the late 1920s to play Anita Page's mother in "Our Dancing Daughters" (1928) and in a supporting role in the 1929 Greta Garbo vehicle "The Single Standard." She then appeared in a handful of talkies before retiring in 1935. (I have no idea whether Lombard ever met her.)

In 1949, Williams was involved in an auto accident that forced one of her legs to be amputated. She died in 1960.

While "The Adventures Of Kathlyn" isn't available online, another Kathlyn Williams performance from 1914 can be seen. It's from the Alaskan frontier film "The Spoilers," starring William Farnum, where she has a supporting role as saloon gal Cherry Malotte. (Perhaps Jane Alice also saw this film before she left Fort Wayne.) By 2013 standards, it's extremely slow-moving and primitive, but it does have its charms. Here's the entire film, all 98 minutes of it (if that's too long for one sitting, it's also available on YouTube split into 10 parts):

Carole's wearing that filmy outfit again in our LiveJournal header, this time in Paramount p1202-98.
Collapse