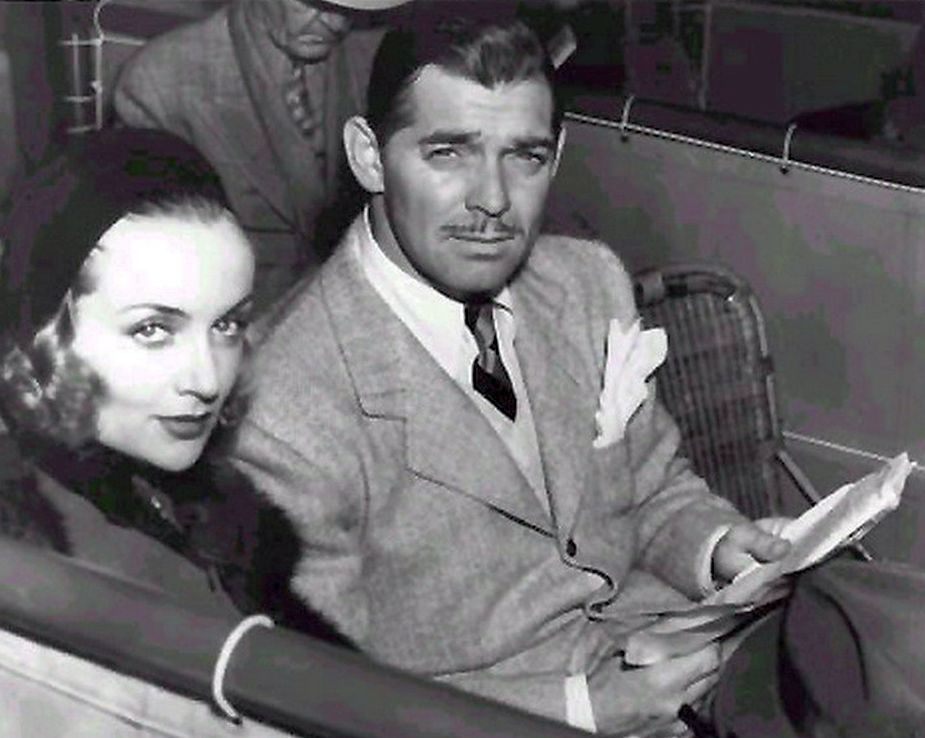 Rest assured, this story is far less morbid than its title implies, and even if that weren't the case, Carole Lombard and Clark Gable wouldn't be part of that crowd. Still, it must have caused a bit of prurient thinking from those who picked up a copy on the newsstand, with leggy Betty Grable on the cover, and caught a glimpse of the headline: 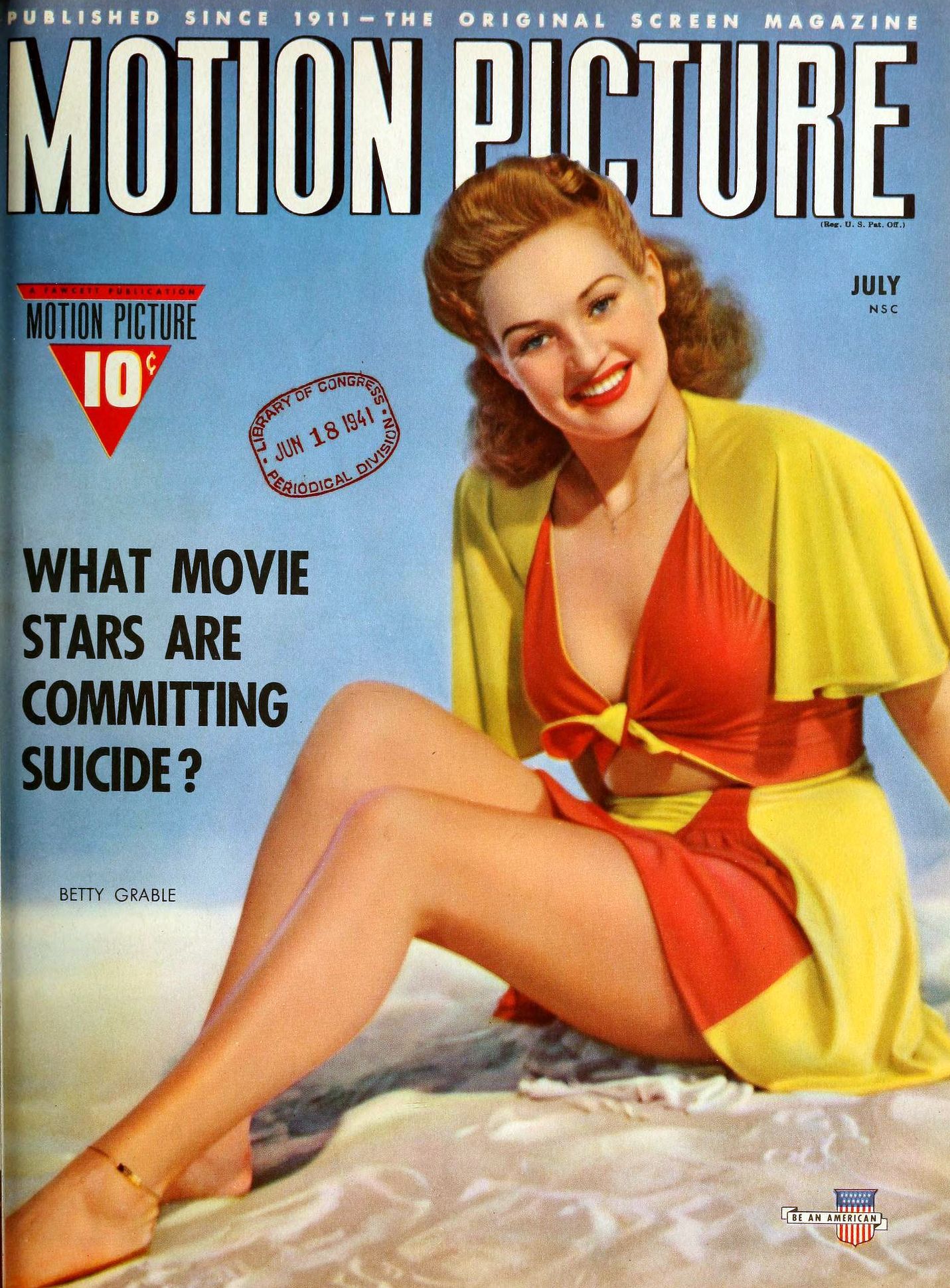 It was a "teaser" (a strategy familiar to anyone who looks at supermarket tabloids today); the "suicide" here referred to careers, not lives. The gist of the story was that showmanship helped stars stay on top, and those who didn't have that knack were doomed.

The good news for Clark and Carole, according to the article, was that both possessed that knack -- even if they spent little time nightclubbing in favor of living in relative quiet at their Encino ranch: 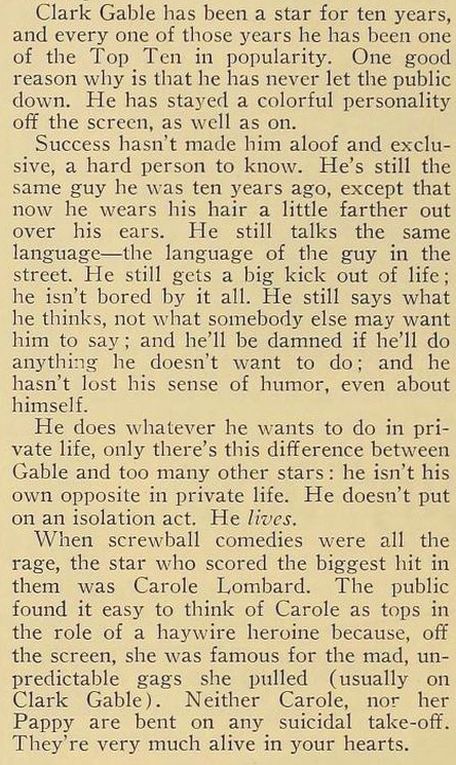 Here's the piece in its entirety: 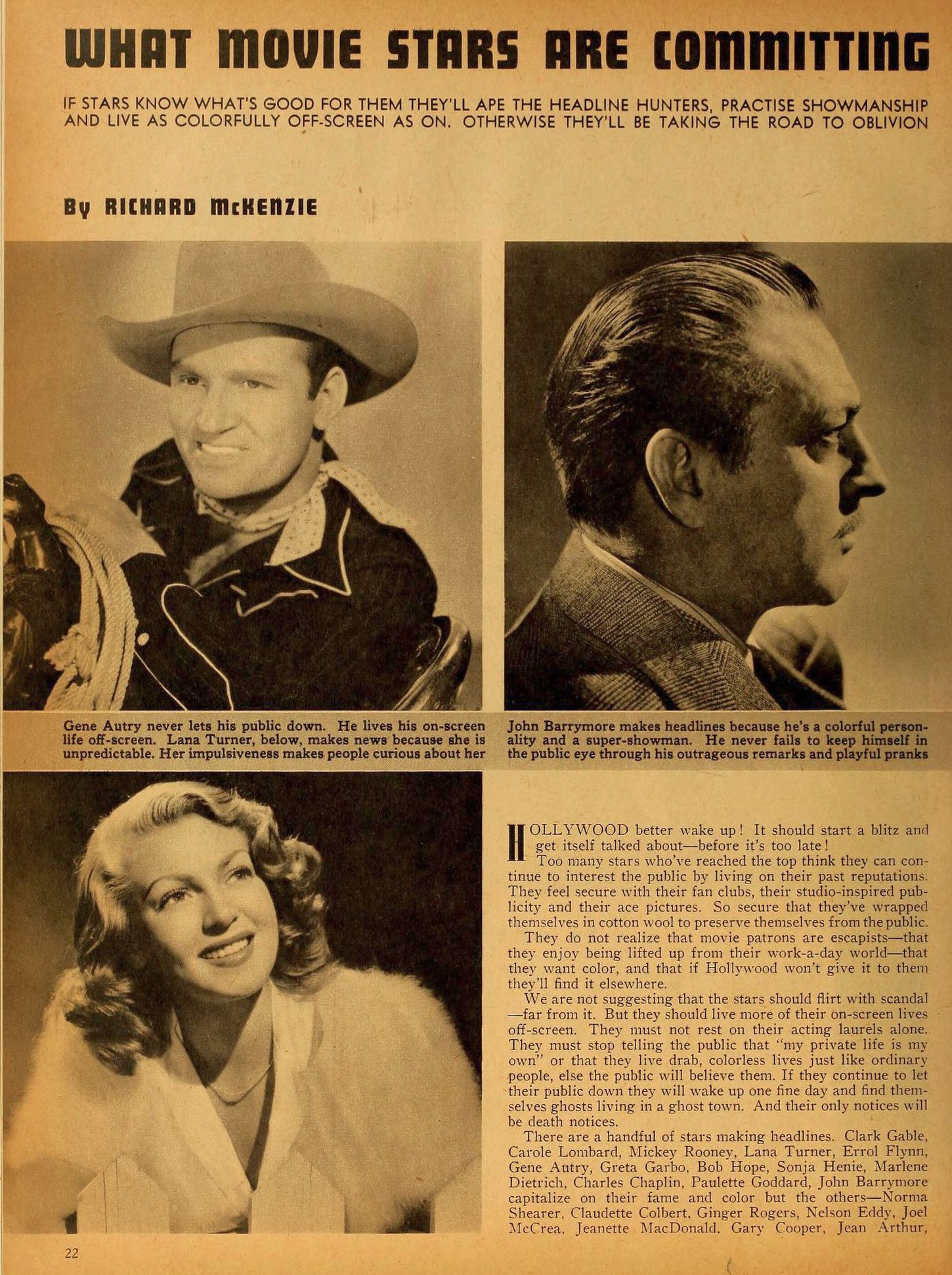 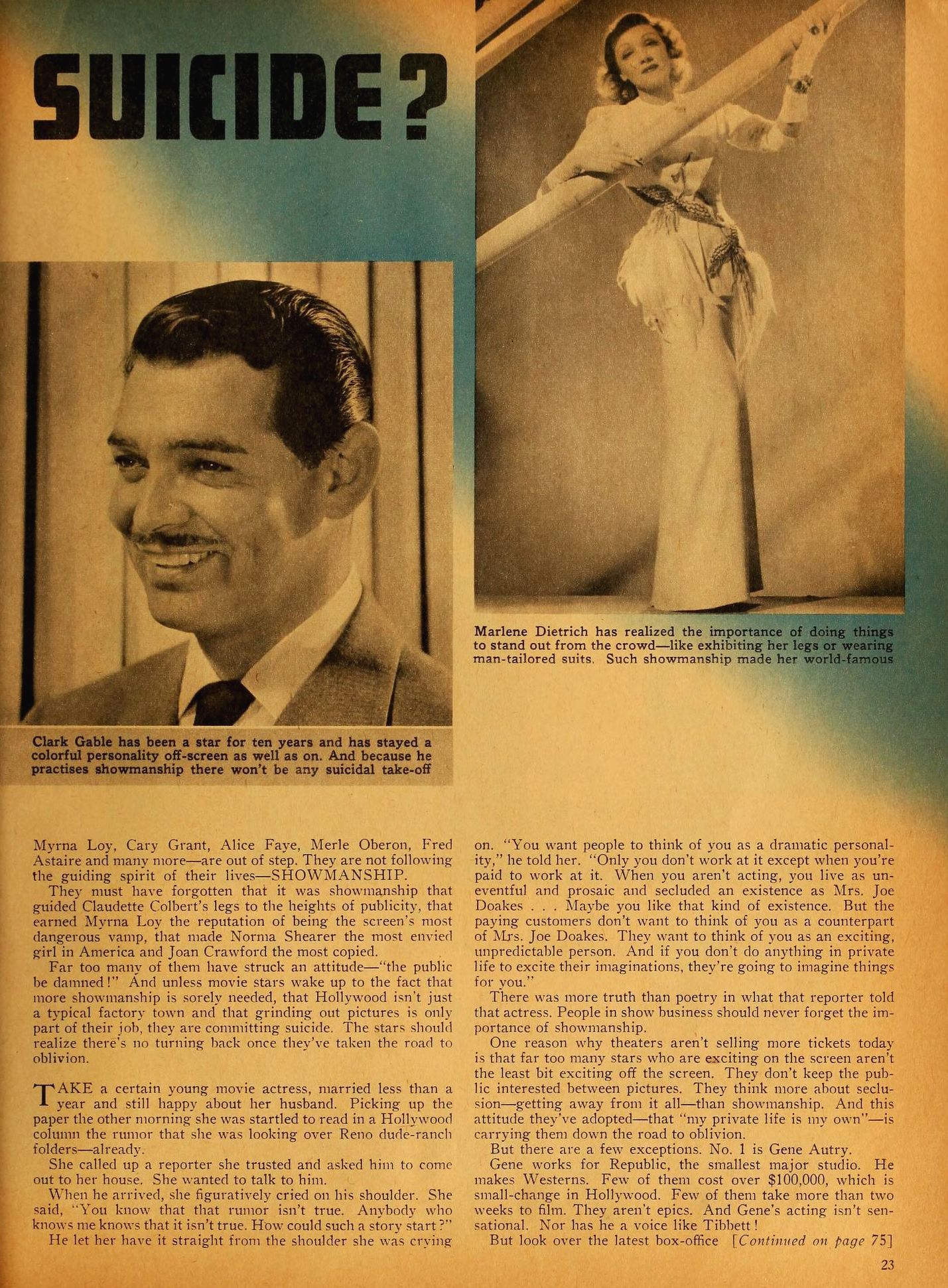 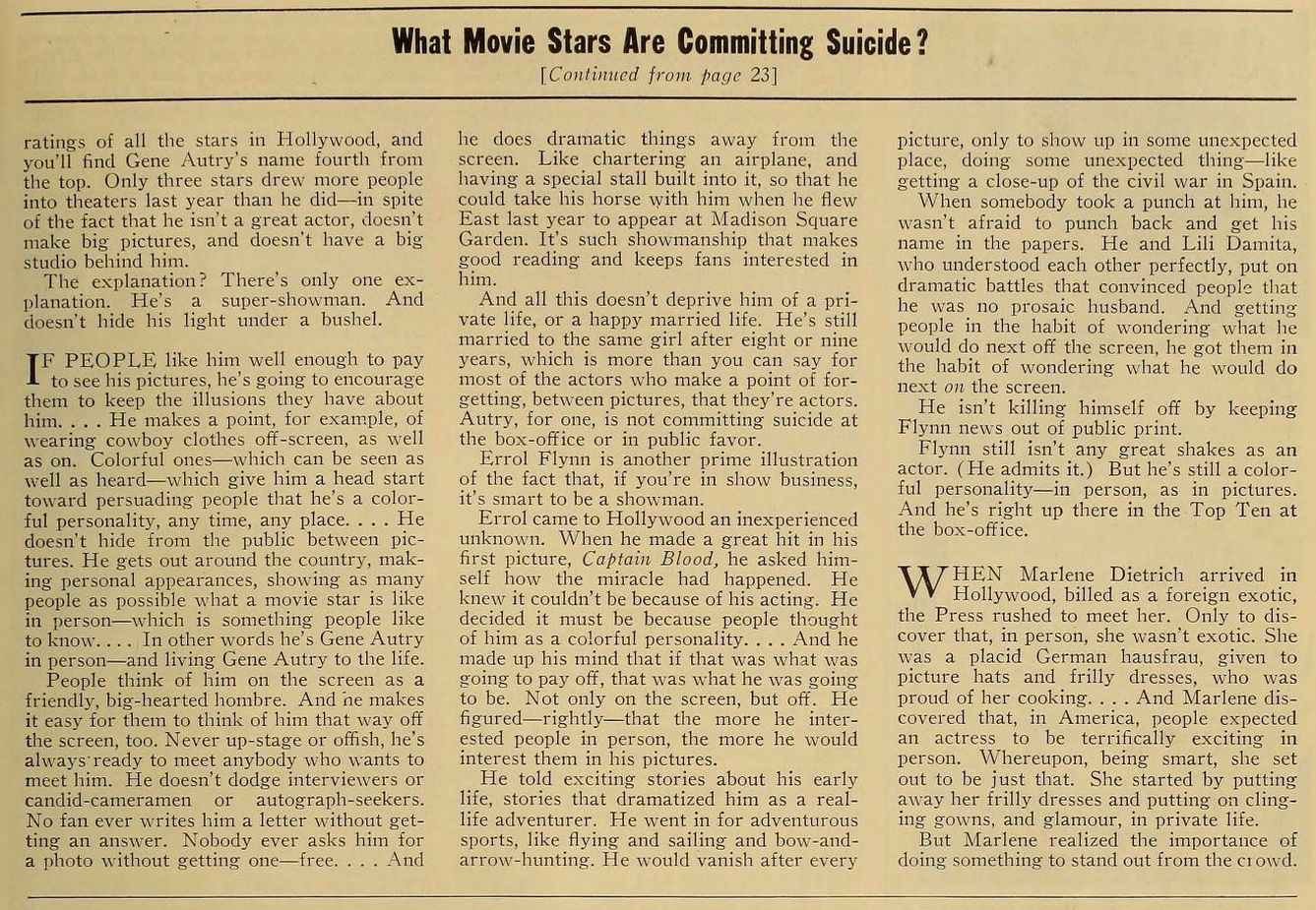 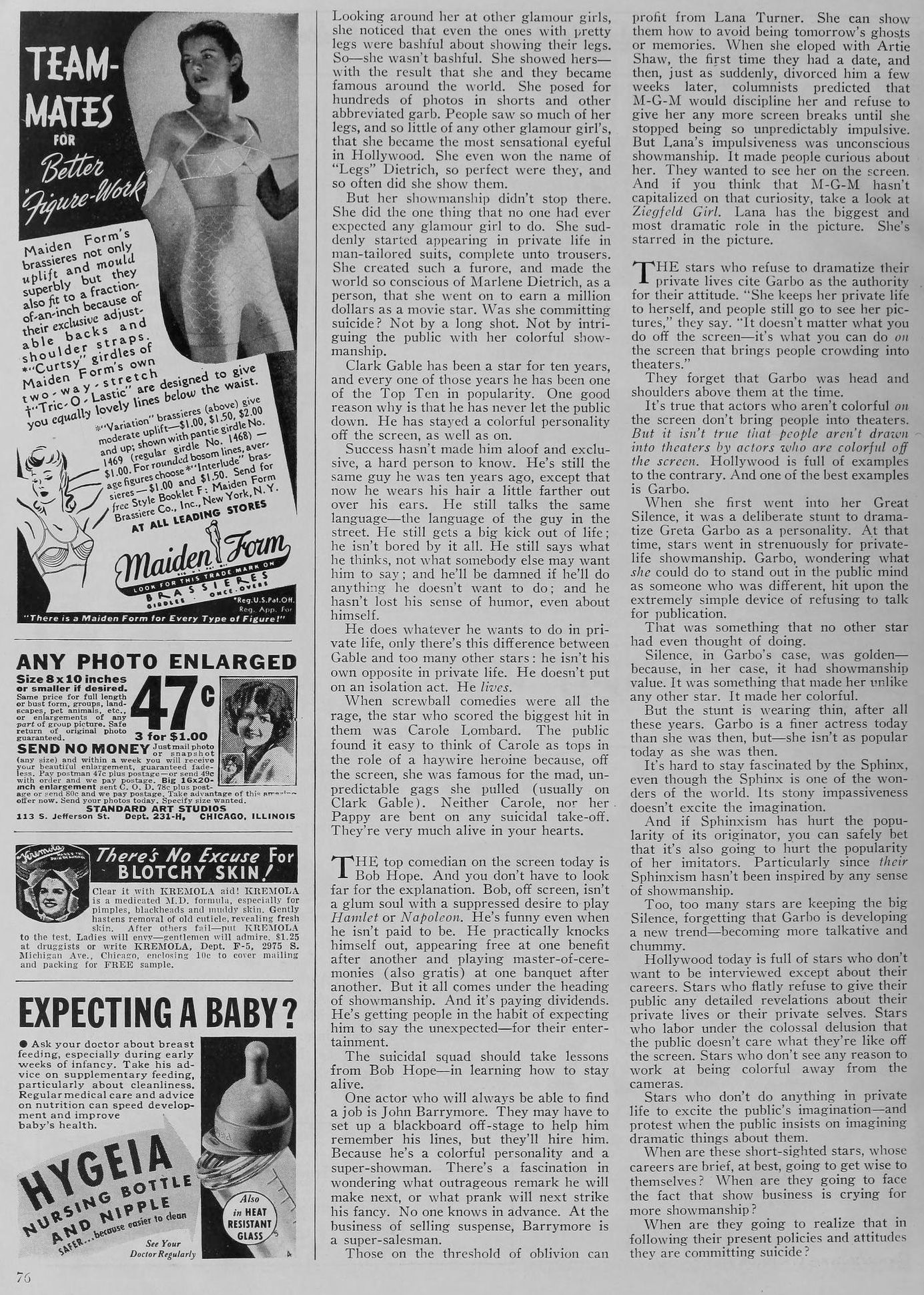 It's interesting to see the stars the author says are and aren't capitalizing on showmanship. In addition to Gable and Lombard, the former group includes Gene Autry, Errol Flynn, Lana Turner, Marlene Dietrich, Mickey Rooney and Charles Chaplin. Among those in the latter are Claudette Colbert, Ginger Rogers, Myrna Loy, Gary Cooper, Cary Grant, Alice Faye and Fred Astaire.

A lack of showmanship certainly didn't hurt Astaire, Cooper and Grant during the '40s (and it could be argued that for showmanship, all Astaire had to do was dance or sing). The female stars listed eventually fell out of favor, though in most cases it didn't happen until after World War II. (It's no secret audiences weren't as forgiving to actresses aging as they were to actors.) And on the benefits of showmanship, Loy probably wasn't too enthused about being promoted as a vamp at the start of the '30s.

As for those on the pro-showmanship side, it could be argued that Autry's stardom was in a genre (westerns) that was only beginning to escape its Saturday afternoon status, thanks to John Ford's "Stagecoach" and the like. Audiences for Autry's films expected showmanship, just as they had for his predecessor, Tom Mix. Chaplin, by now in movies for more than a quarter-century, had learned the value of showmanship in the nickelodeon era, while Dietrich probably cultivated her image to a greater extent than any of her contemporaries...although let's not forget that Lombard didn't do a bad job of it, either: 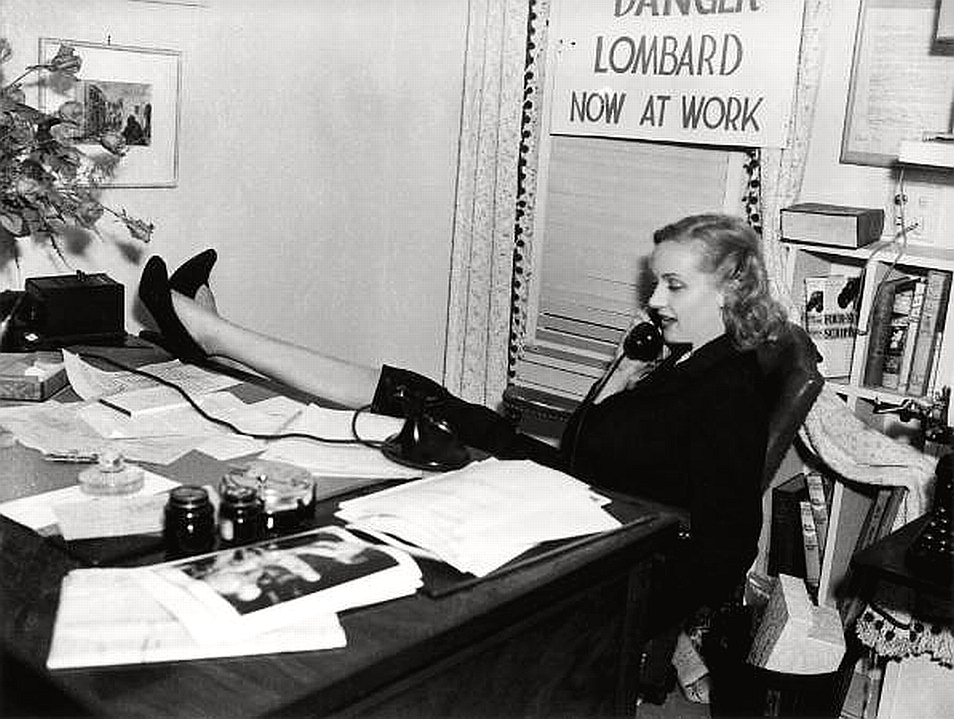