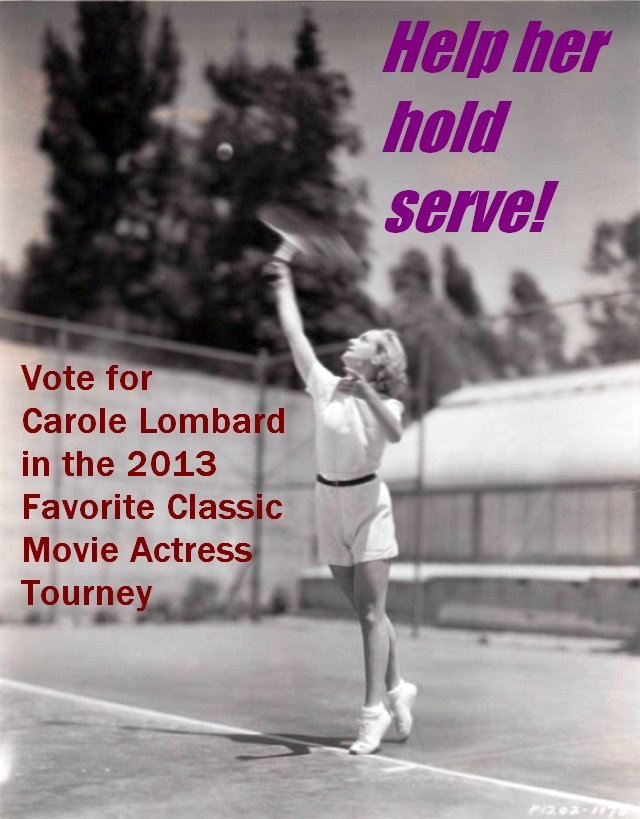 Our latest Carole Lombard 2013 Favorite Classic Movie Actress Tourney banner has restored her to normal size (hey, it's hard to stand on a tennis court when you're 200 feet tall!), but with the second round of voting already begun, it appears Lombard again is looming large over the competition. As of 9 a.m. (Eastern), top-seeded Carole is ahead of fourth seed Jean Harlow, 18-9, in one semifinal of the "Funny Ladies" division; the other has number two Myrna Loy well in front of third-seeded Jean Arthur, 26-1. The other division being contested in the 1930s bracket is "Singers/Dancers," where fourth seed Eleanor Powell has a 15-9 edge on number eight Bebe Daniels and seventh-seeded Joan Blondell is blanking sixth seed Ruby Keeler, 25-0.

Lombard won't rest on her laurels, however; Harlow is a tough competitor with many fans. The Carole camp needs to come out in force and vote for her -- go to http://poohtiger-allgoodthings.blogspot.com to cast your ballot in 1930s races. Voting ends on Saturday.

In the 1940s bracket (http://rosalind-russell.blogspot.com/), the two "Sophisticates" semifinals have Rita Hayworth ahead of Lucille Ball, 10-8, in the battle of red hair, while Maureen O'Hara is up 14-5 on Loretta Young. (Is it too late for Loretta to go to the beautician and dye her hair red?) In "Film Noir Femmes," Gene Tierney leads Claire Trevor, 16-3, and Lauren Bacall has a 13-6 edge on Ida Lupino.

Among 1960s actresses (http://mythicalmonkey.blogspot.com/), we have two tight matches in the "British Invasion" division, as Angela Lansbury leads Diana Rigg, 12-11, and Julie Andrews and Maggie Smith are tied at 12. In the "All-American Girls" division, Anne Bancroft has a 15-8 lead over Patricia Neal and tourney newcomer Paula Prentiss continues her impressive showing with a 12-8 advantage on Tuesday Weld.

Second-round vote in the 1950s bracket hasn't begun yet; go to any of the other brackets to get a link to its voting. Its matches will include Elizabeth Taylor vs. Eleanor Parker and Marilyn Monroe vs. Lana Turner.
Collapse