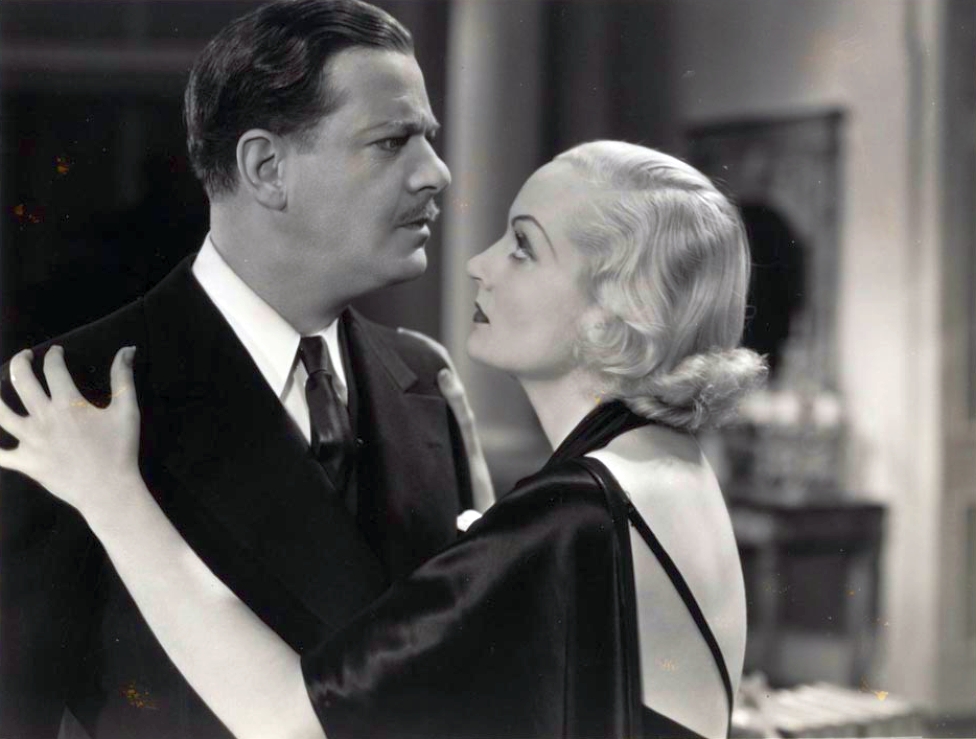 The early part of March 1933 was a tense time for Hollywood, as we noted last month (http://carole-and-co.livejournal.com/578625.html). Studios were facing bankruptcy, salaries were planning to be cut by as much as 50 percent and a bank holiday called by new president Franklin D. Roosevelt left some in the industry without ready access to cash. And Carole Lombard was facing tension of her own, making "Supernatural" (shown in a publicity still with Alan Dinehart), a horror film she felt ill-suited for.

At about 5:55 p.m. Pacific time on Friday, March 10, even more tension hit -- this time from Mother Nature. An earthquake, centered not far from Long Beach, did considerable damage to that city and also affected Los Angeles, its larger neighbor to the north. 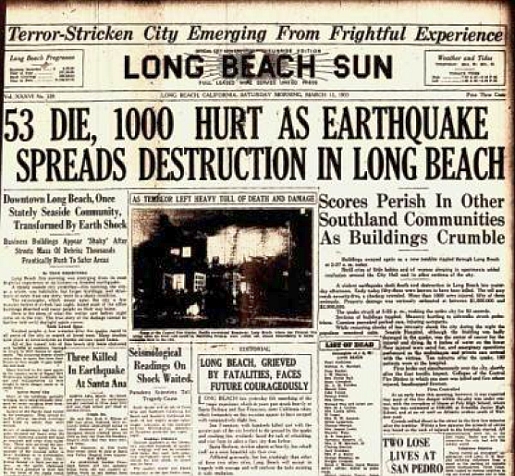 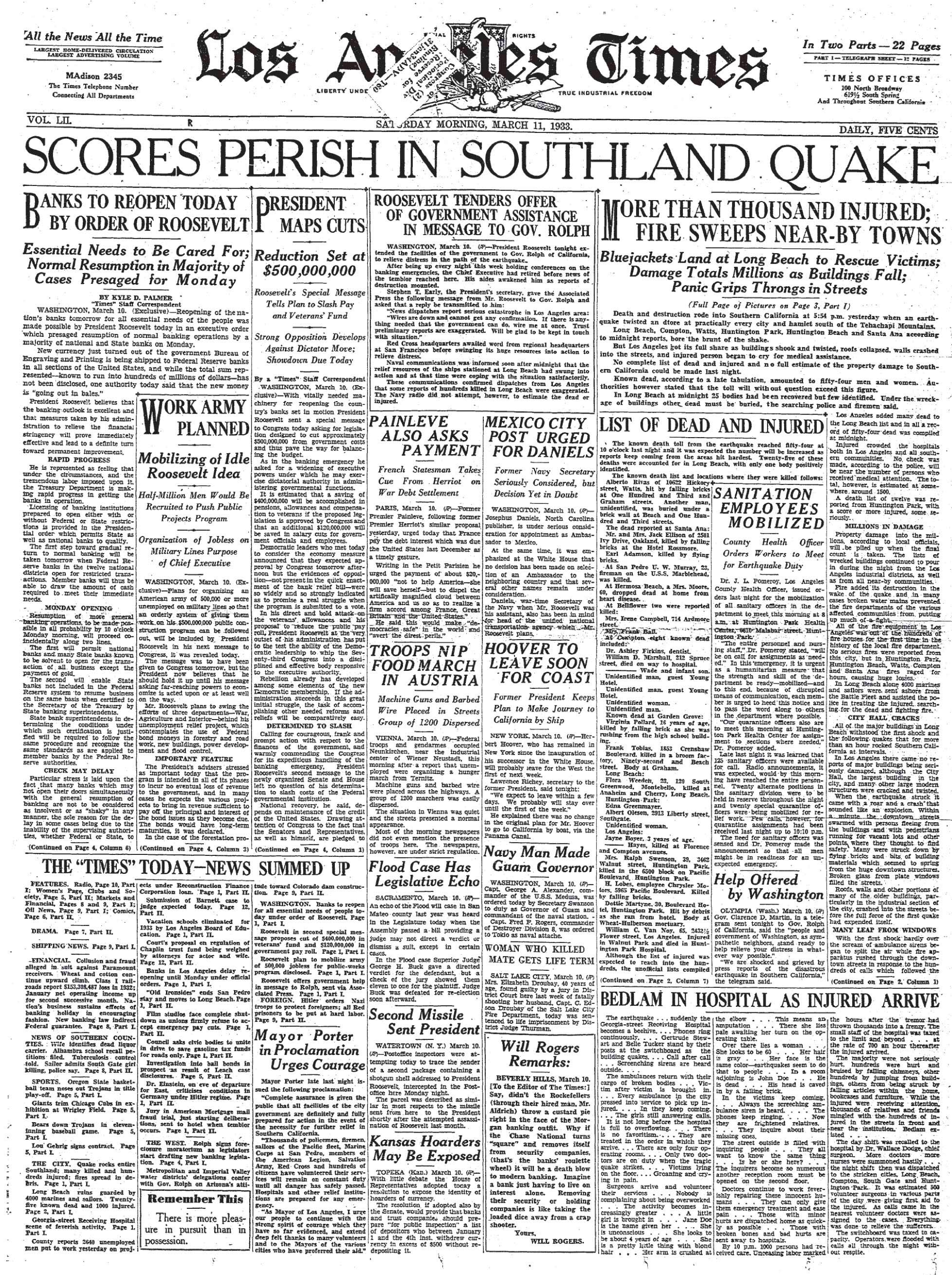 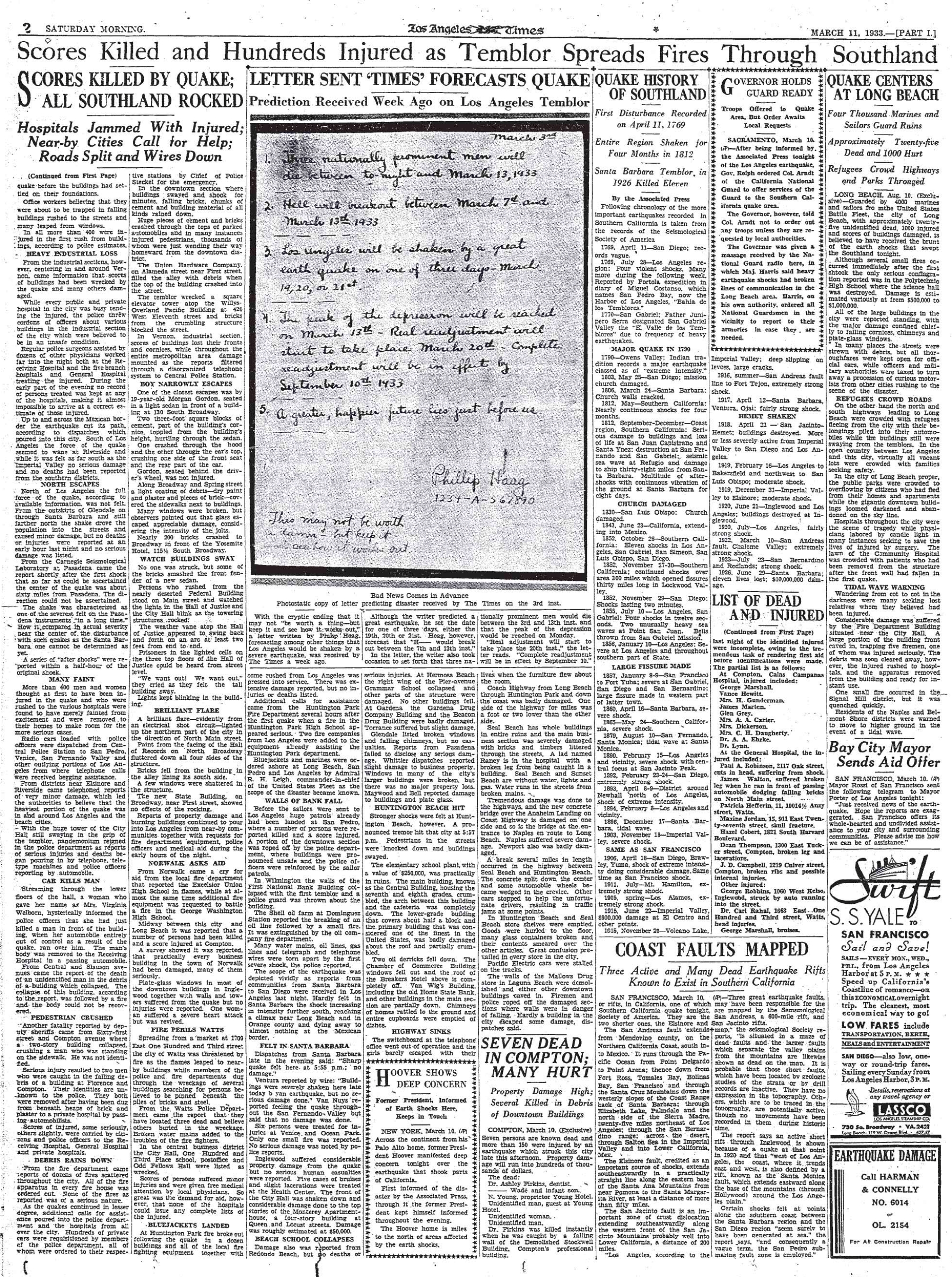 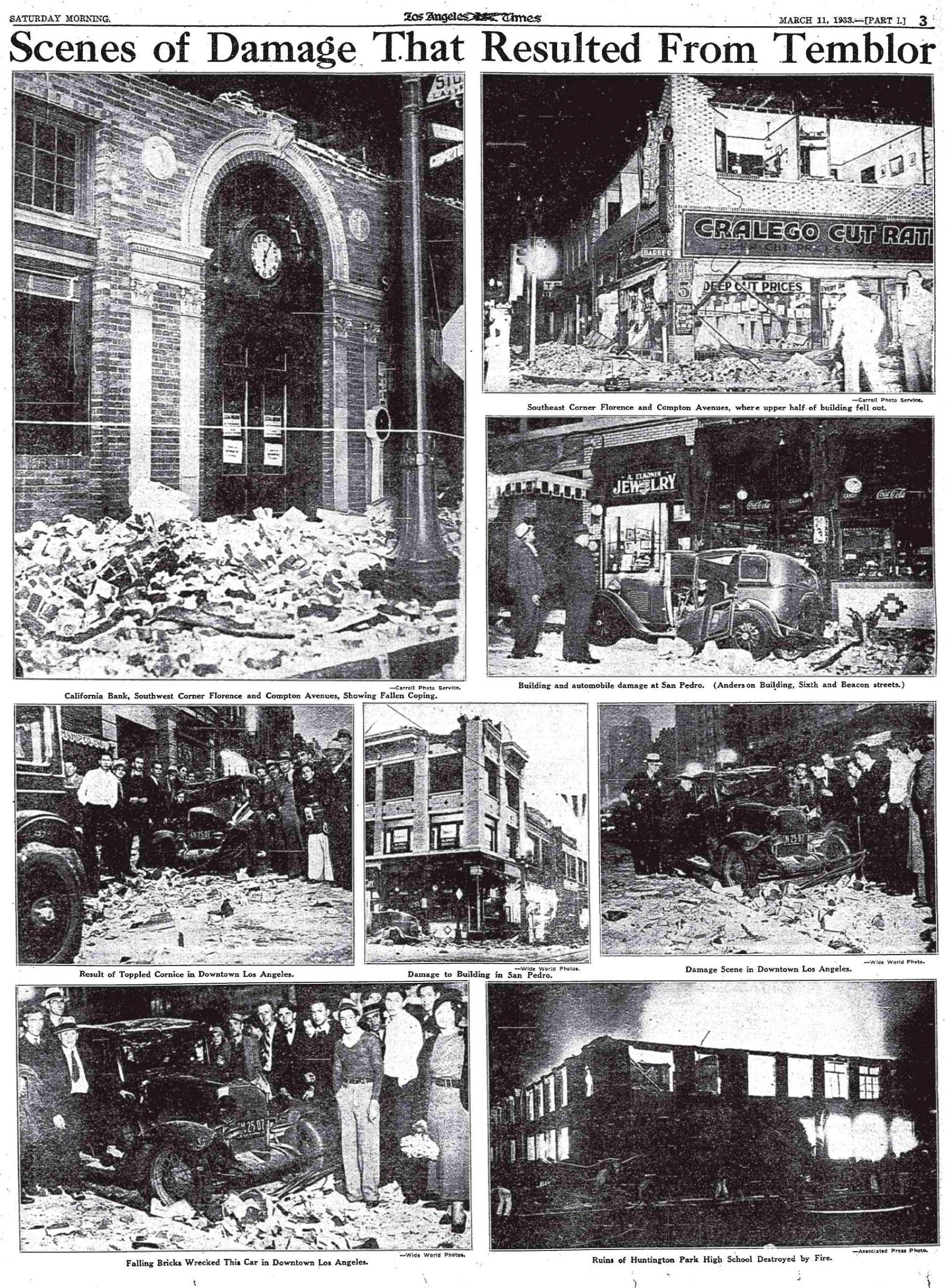 Some 80 years after the quake, surviving Long Beach residents have distinct memories of what happened, thankful it occurred a few hours after school had let out (http://www.presstelegram.com/news/ci_22756365/80-years-later-children-1933-long-beach-earthquake).

How did it affect the movie industry? Nothing major, though there were some jittery moments. The June 1933 issue of Motion Picture ran a story on what film personnel were doing at the time the temblor hit. We ran several other articles from that issue last month, but saved this piece to coincide with the quake's anniversary. 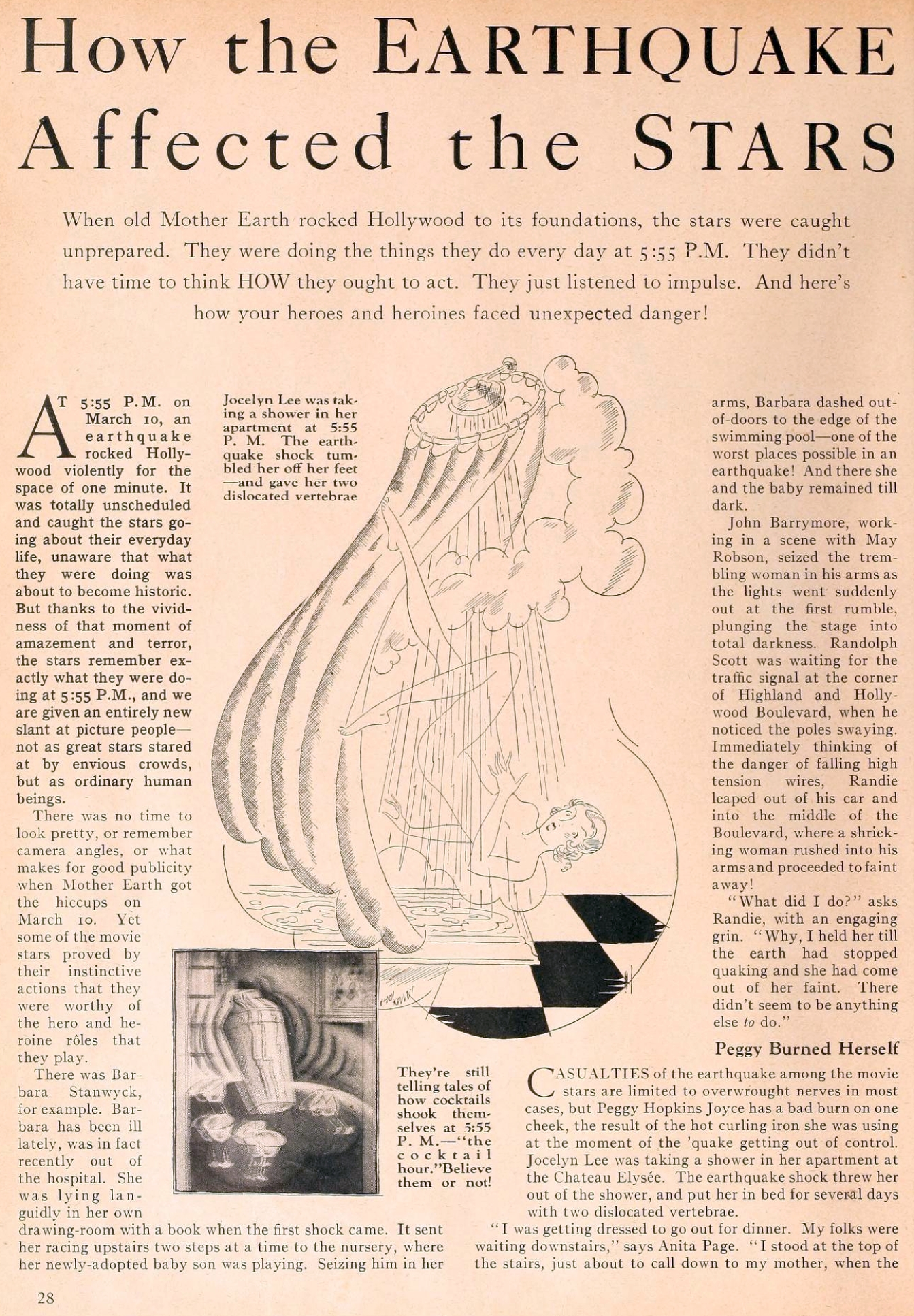 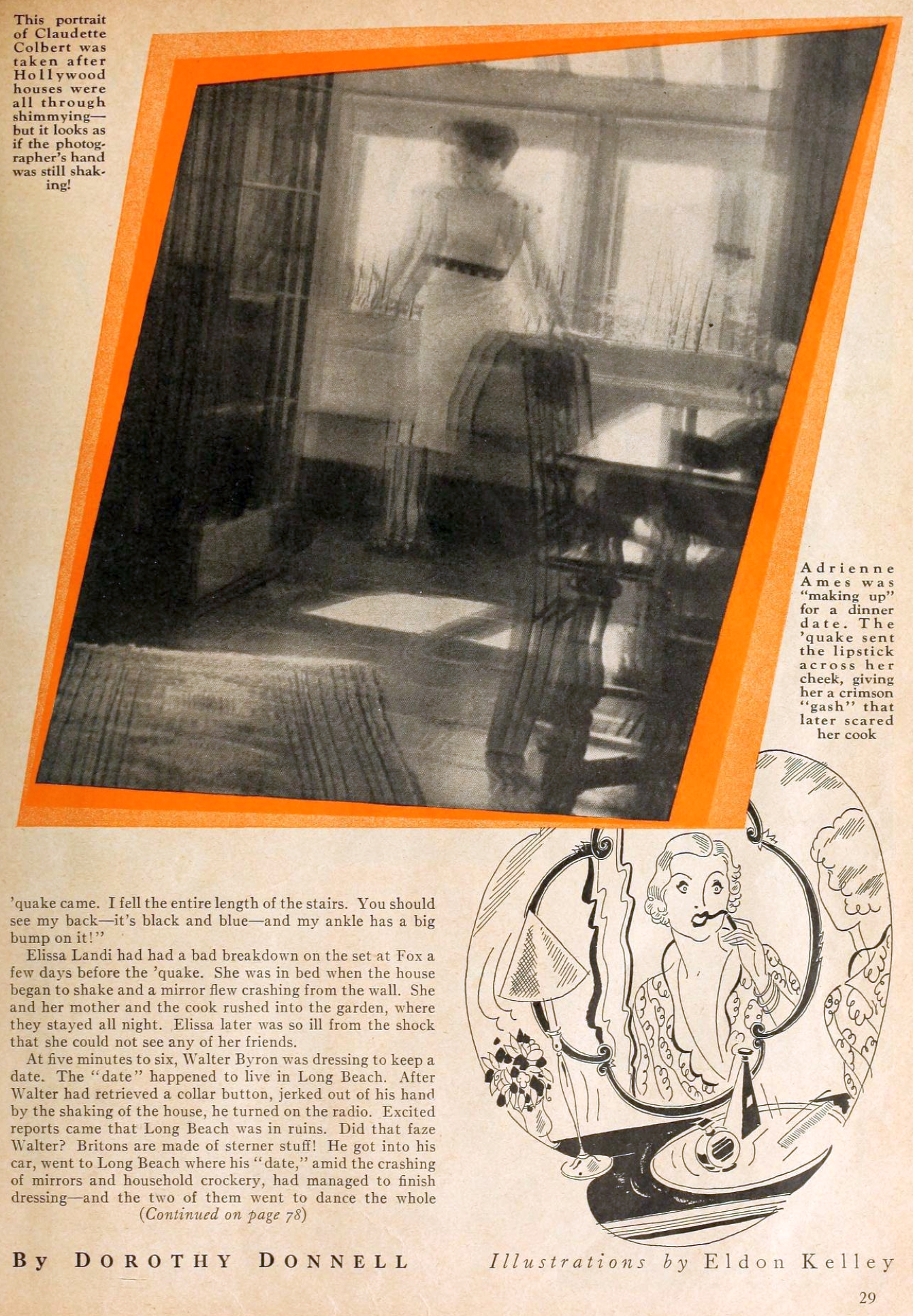 This description, and another that ran in Time magazine, possibly renders apocryphal one of the greatest of Lombard anecdotes, furnished by Sidney Salkow in Danny Peary's book "Close-Ups." We know Carole wasn't happy making "Supernatural," and took out much of her frustration on director Victor Halperin. After the quake hit, Salkow wrote, Lombard walked up to Halperin, pointed at him, and said, "Victor -- that was only a warning!"

It's interesting to note a similar anecdote came out of an Academy of Motion Picture Arts and Sciences meeting at the Roosevelt Hotel...after the temblor, the telephone rang and a voice loudly said, "This is God! That was a small sample of what will happen if the cuts go through!" Screenwriter Norman Krasna, who would later write several films for Carole, was the culprit.

According to the Motion Picture story, at the time of the quake, Clark Gable was in the Ambassador Hotel, planning to buy a pipe. But the site "Dear Mr. Gable" has a slightly different tale of Clark's experiences during the quake (http://dearmrgable.com/?p=5325), as part of a fan magazine report on the incident in its May 1933 issue. It states, "Clark Gable was in the publicity office. When the lights went out Clark made for the door. His foot went into a wastebasket and he went flying into the street, wastebasket and all."

That story also accurately notes that "Broadway stage folk who had recently arrived stood with white faces and open mouths, terrifiedly wishing themselves back in New York." This was something many of the emigres from the east had never experienced.

And note that according to writer Dorothy Donnell, "Carole Lombard doesn't believe in pants for women," but Miss Lombard begs to differ: 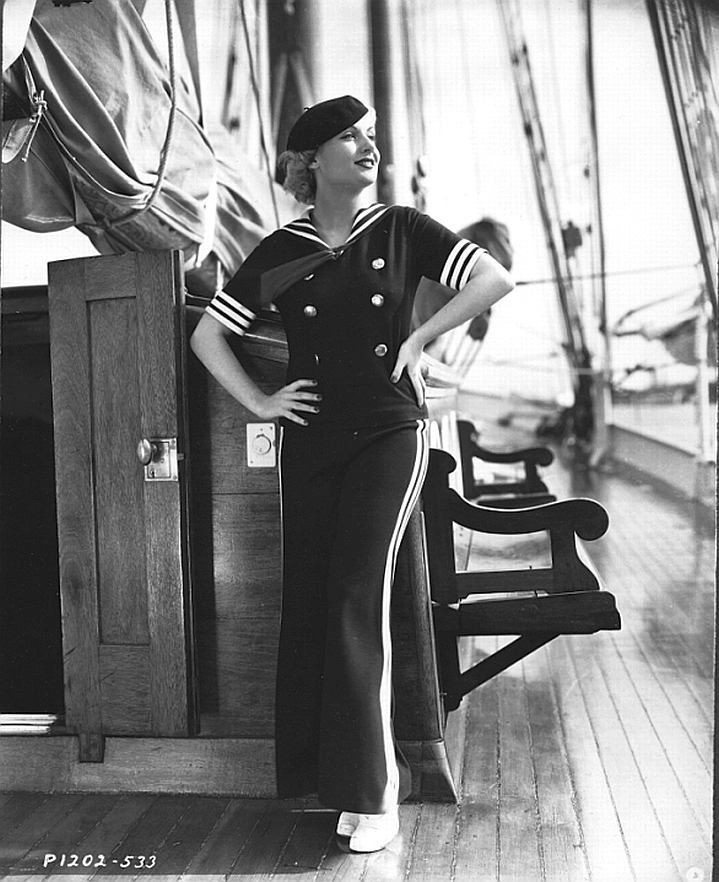 To close, an appropriate song -- Carole King (who was named in honor of Lombard in 1942), with my favorite record of hers, "I Feel The Earth Move," from the 1971 mega-hit album "Tapestry." (The following winter, I was at a high school basketball game where a dance troupe performed to this song...but the gym's public address system was so distorted it sounded as if it was being sung by Rod Stewart.) 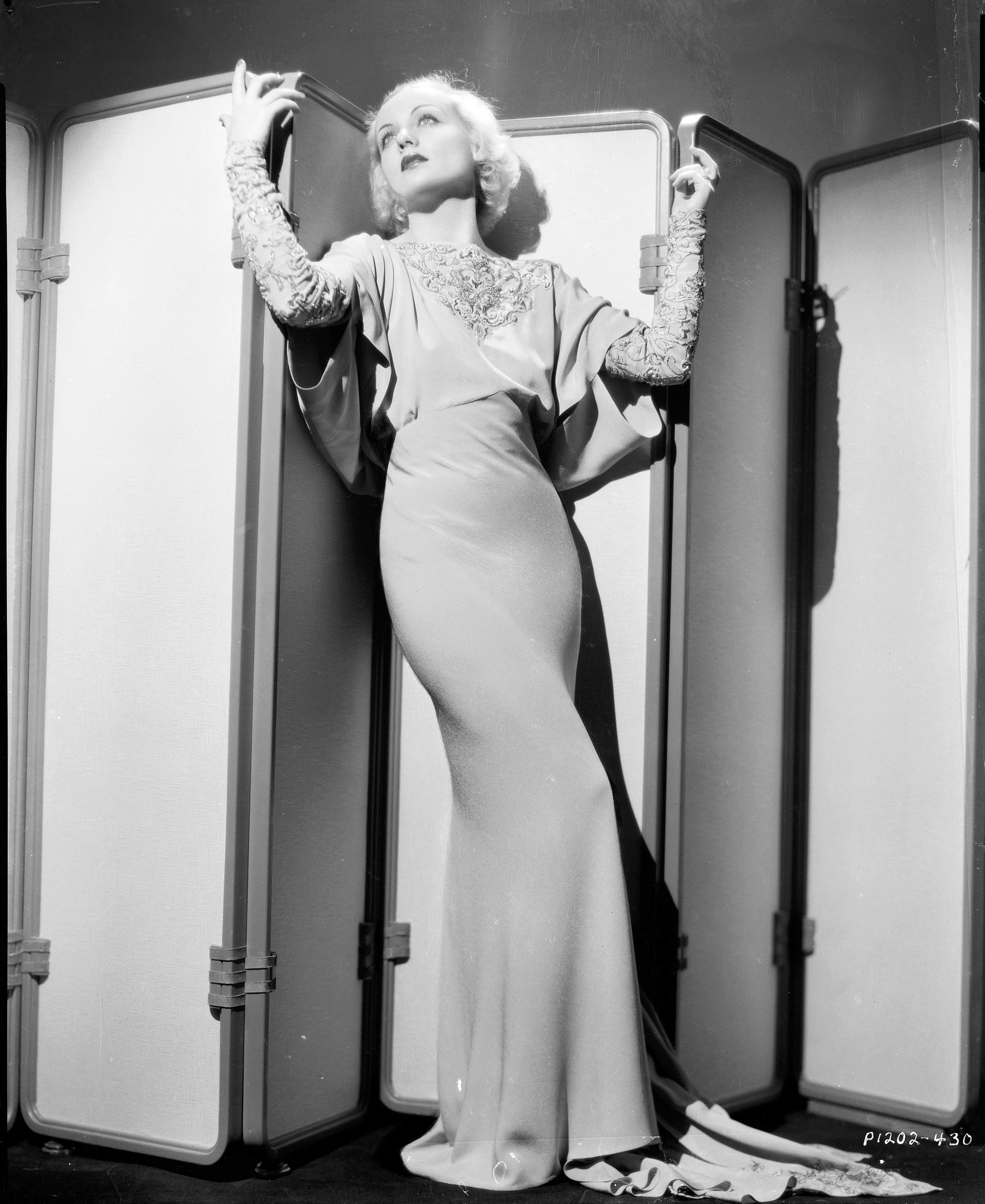 We unfortunately don't have any firsthand account from Carole Lombard about the earthquake that struck southern California 80 years ago today, causing most of its damage south of Los Angeles (notably Long Beach) but also affecting moviemaking sites in the area, albeit to a far lesser degree.

One of Carole's contemporaries did speak to the press about it, however...Jean Harlow: 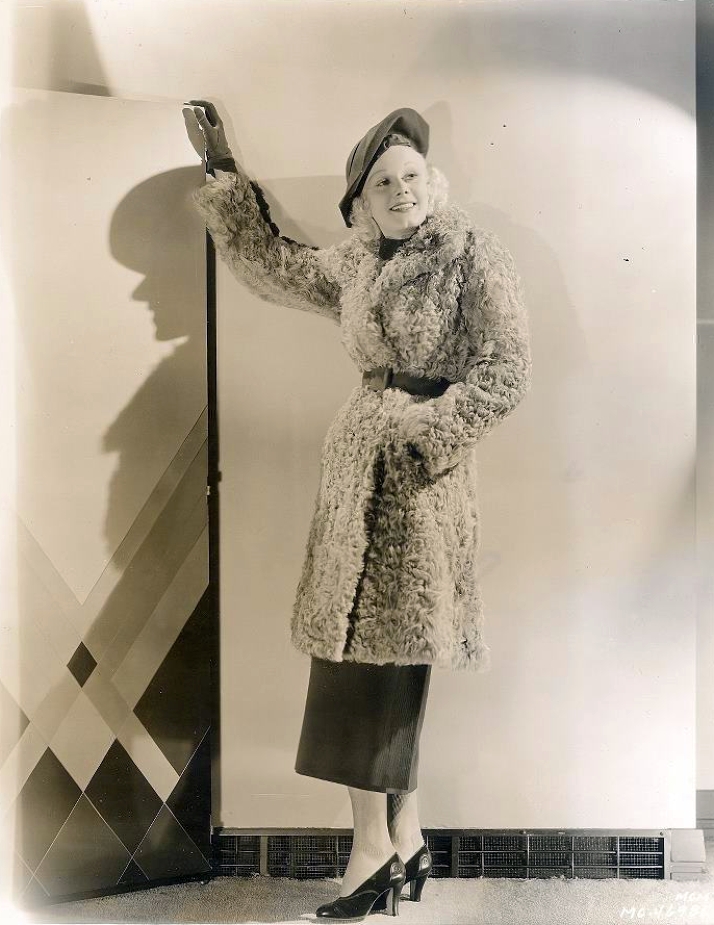 Harlow discussed her experiences in a piece syndicated by the North American Newspaper Alliance and published days after the quake in the Boston Globe and other papers. Here it is, courtesy of William M. Drew, who has provided plenty of information for this site in recent years and who has a fine Facebook page on that era, "Movies of the 1930s" (https://www.facebook.com/groups/322435627853428/):

Jean Harlow Tells of Her Own Fear: John Barrymore Laughed, Clark Gable Calm
By Jean Harlow (Star of "Red Dust" and Other Films)

Los Angeles, March 12 (NANA) -- I never was in an earthquake before. Dressed in practice clothes, covered by a cloak, I was on my way to our studio stage for a dancing lesson. Suddenly the whole world went mad. I didn't realize what was happening at first. The great steel water tower on the lot was swaying like a tree. Buildings rattled. Windows crashed. Lights flickered crazily and died. The sidewalk under my feet moved from side to side in short, sharp jerks. I could hardly keep my footing.

The big concrete sound stages waved as if in a high wind, and under all was a dull rumble. I wanted to hold onto something -- but there wasn't anything handy. I could hear screams from the offices. People rushed out of doors, in pell-mell flight.

Clings to Tree Trunk
There was a tree nearby. I managed to stagger over to it and cling to the trunk, as the whole studio danced giddily around. I never knew how much comfort a tree could be. For the first time in my life I was afraid. Not afraid of anything physical or touchable, but of something unseen. I wanted my mother, just as a little girl would. I clung to that tree to keep from falling into the dizzying motion of the world around me. I laid my face against the rough bark; it was something substantial in a falling universe.

They say when you are facing death your whole life unfolds before you. But I thought of nothing but my mother, wondering how she would feel when I was crushed beneath the tree, and hoping with all my heart that she was safe. Then, as suddenly as it had begun, the giddy dance of the earth stopped.

Then Pandemonium
And I think that the quiet and absence of motion was almost as terrifying as the giddy, sickening motion of the moment before. I wanted to laugh and I wanted to cry. I still clung to the tree. At that moment pandemonium broke out. Voices were all around me. People were pouring from stages and buildings, calling to each other, screaming in their excitement. The studio streets, empty a few seconds before, were filled with men and women, as if a giant Jack-in-the-box had been released.

I walked toward the main street of the studio. "Are you all right?" was the universal question -- everyone was reassuring everyone else. Benita Hume came dashing by. She only recently arrived from England, and it was her first experience in a quake, just as it was mine. She was laughing hysterically. "And to think," she cried, "that I came half way around the world for this!" Clark Gable came striding by, his step steady, reassuring people right and left as he came. "All right, Baby?" he asked me. Then he added, "Me, I'm going home now."

John Barrymore Laughs
John Barrymore was out in the street, telling about how he was in the San Francisco earthquake, how much longer it lasted, and laughing at anyone who displayed fear. He's a veteran of earthquakes. Lionel was out, too, telling about a quake he experienced in Italy. That one was caused by a volcano, he explained. May Robson came by, extremely nervous. She'd been through them before, she told us, but just the same she didn't like 'em. Wallace Beery lumbered by. "Take it calmly -- take it calmly," he kept calling out. "Earthquakes can't hurt you." I think he did a lot to calm us all down.

On the steps of one of the buildings a little redhead stenographer was crying. She couldn't stop. She, of all the hundreds of people, was giving rein to the hysteria within her. People around were sympathizing, offering her water, an ammonia bottle, and, pretending to be calm themselves, probably envying her the freedom of emotion.

Drives Home to Mother
Somehow, I found my car, parked under the still swaying trees. Then I remembered I must telephone. I raced upstairs, but all the lines were busy. Everyone in the entire studio was trying to get word out to the family at home. So I went back to my car. The gateman waved to me as I drove out. I remember thinking how glad I was that he was safe. There was an ominous silence over the whole city as I drove home. I kept to the center of the street.

Arrived home, I found all the neighbors out in the front yards, swapping experiences over the hedges. My mother was safe. For the first time I felt safe. I am glad now that I've had the experience of an earthquake; but I hope it will never be repeated.

An incredibly vivid description of how the quake affected the MGM lot in Culver City -- and since Jean harbored ambitions to be a writer (and eventually would write a novel), this may have been more than one of your "as told to" articles.

This also provides yet a third account of where Gable was during the quake, in sharp contrast to the two mentioned in our quake entry earlier today -- and thanks to its immediacy, probably more accurate than either fan magazine report. (Of course, some three years later, Gable made "San Francisco," which had a scene involving an earthquake -- the 1906 temblor John Barrymore cited above.) 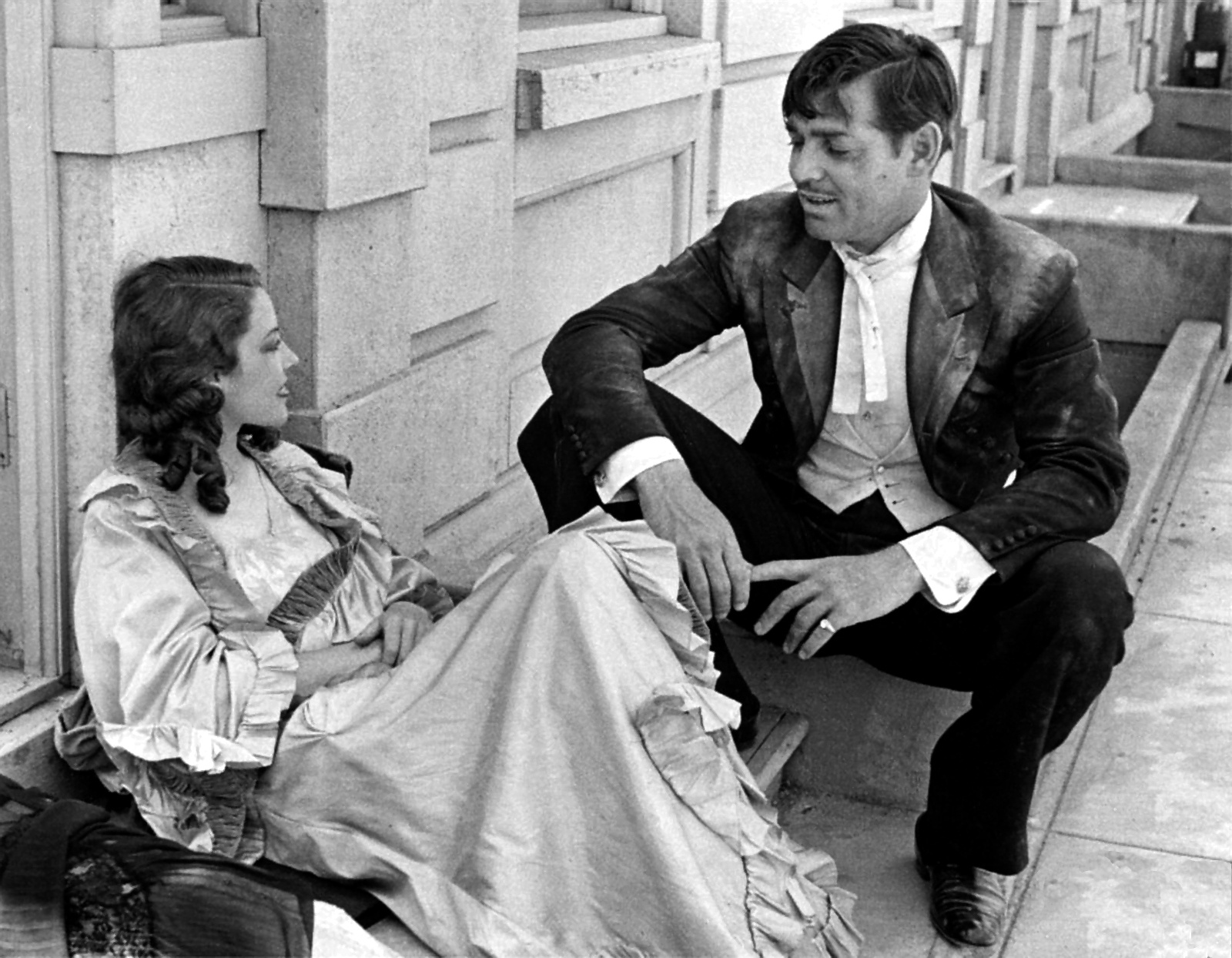 Drew says the dancing lesson Harlow planned to take were for a Rodgers and Hart musical that would never be filmed (but ultimately led to the oft-recorded pop standard "Blue Moon"), and that this also indicates that production work had begun on "Dinner At Eight," released later that year.
Collapse