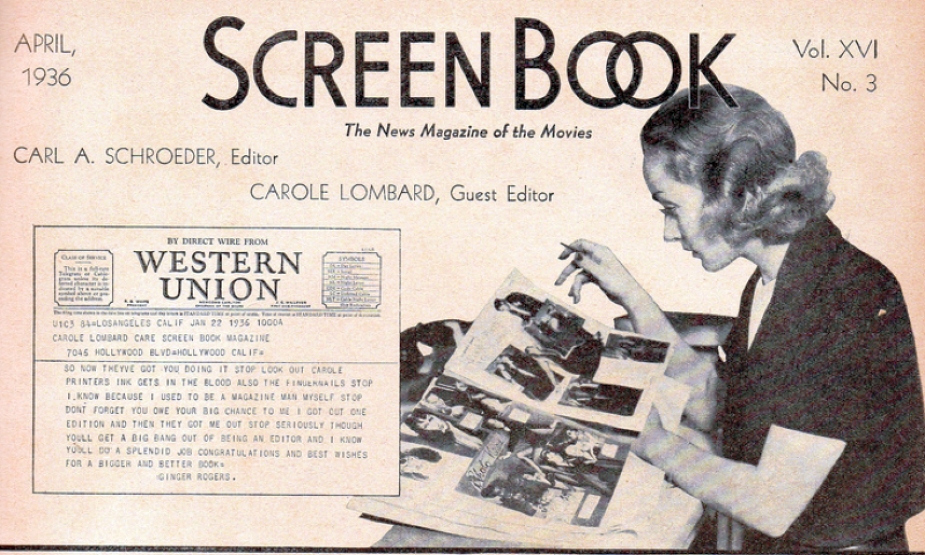 Carole Lombard served as "guest editor" of the April 1936 issue of Screen Book, getting a supportive telegram from friend and former guest editor Ginger Rogers. Lombard even supplied a guest column, giving supportive (but frank) advice to prospective actors and actresses: 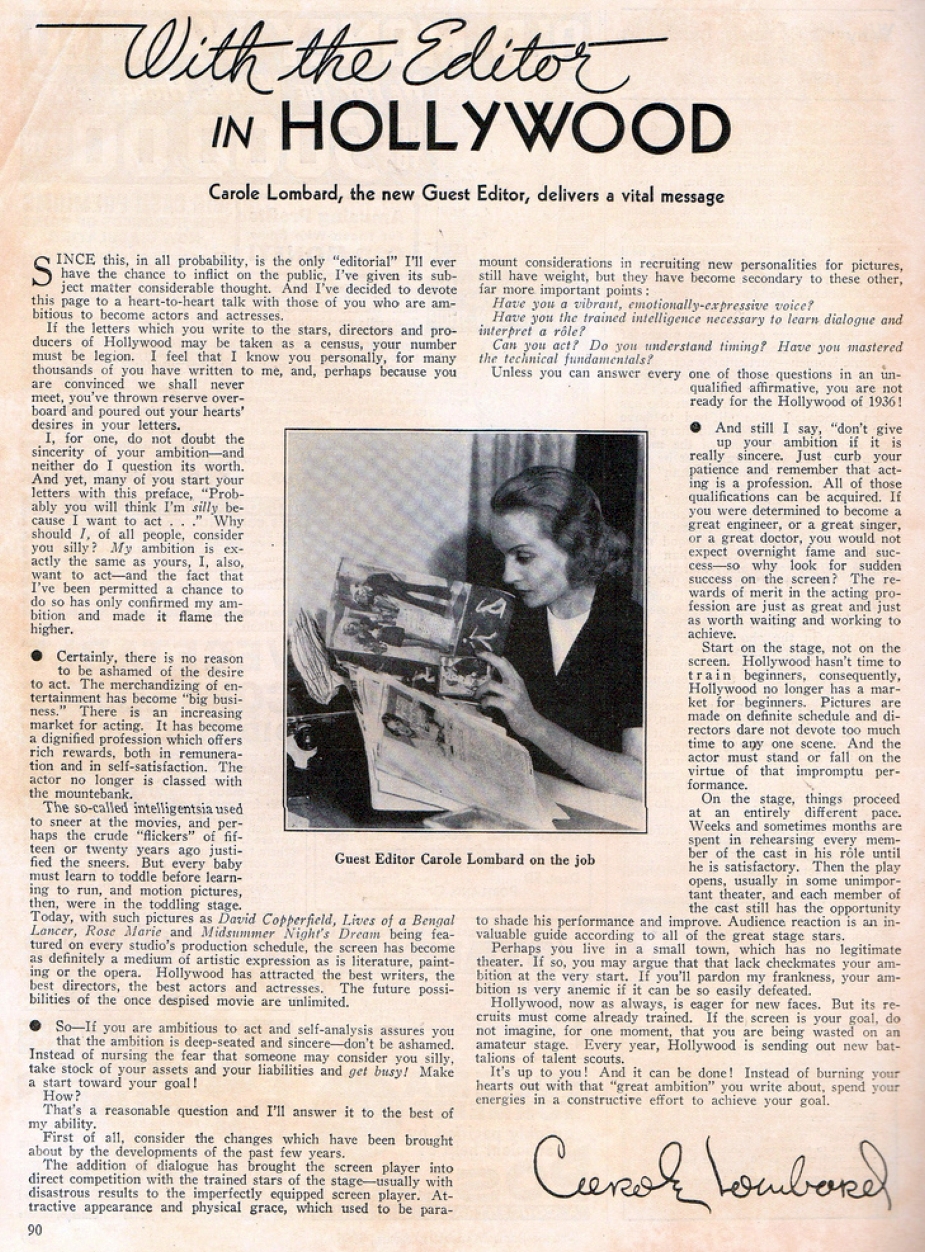 Nearly 80 years after she wrote and edited for the magazine Screen Book, Lombard herself will be the subject of a biography. Yes, more than a few bios have been written about Carole...but this one promises to be the best yet for a number of reasons. It's the first to be written in the wake of the growth of vintage media on the Internet, providing far greater access to material from the classic Hollywood era than was previously available to writers. Moreover, the author's track record is a good one. Among her works is one of the very best volumes ever written on Marilyn Monroe, one that tosses aside the cliches and examines the development of Monroe as human being: 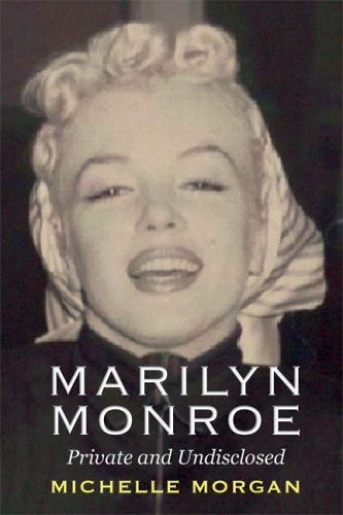 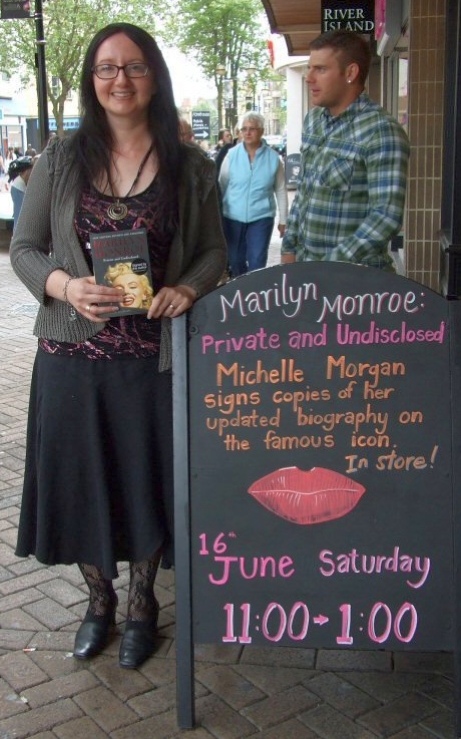 We've known Michelle Morgan was in the process of working on a Lombard bio for some time, so when we wanted an update on the project, this is what she emailed us from England:

"Last March I finally got the green light to write my Carole Lombard book, after five years of working on it on-and-off. However, just two days later, I got an urgent request from my Marilyn publisher, to write a huge book about Hollywood scandals -- 170,000 words before February 2013. It was a really big task, as you can imagine, so I had to put down the Carole project and work on Scandals, which I did until last month when I finally finished.

"Since then I have been slowly but surely gearing up to do the Carole book, which I am now well and truly into. I am working my way through heaps of newspaper articles, interviews, documents and much more, as well as sourcing papers and documents that will be very helpful in the months to come. I have contacted various family members; have found the papers of one of her agents; and am happily digging away to uncover stories about her childhood as well as her later life.

"Today I have decided on a title which I really like. It is...'Carole Lombard: Swing High, Swing Low.' What do you think? I thought it was a good title because obviously it is the title of one of her films, but also her life did swing high and then low, so it's quite fitting. The cover photo is a secret for now, but let's just say I have two that I am definitely planning to use -- one for the front and one for the back. One of the photos is black and white and the other colour, so I'm just trying to work out now which one should be on the front and which one on the back. I'm really happy with the two photos and I hope readers will be too.

"The book is on target to be finished by the end of the year, and will hopefully be out to buy in early summer 2014, published by BearManor Media. This is later than I originally thought, but maybe I will get it done quicker, in which case it will be out slightly earlier. I will let you know in due course.

"At the moment, I am planning to use quite a lot of photographs and I have been very lucky in that regard so far. However, I am always looking for more, so if anyone has any photographs in their collection that they wouldn't mind scanning for me (high resolution please) then I'd love to hear from them. My email address is Michelle@MichelleMorgan.co.uk and if anyone has any magazine articles, interviews, documents, letters or anything else that could be helpful, please, please get in touch. I will source and acknowledge anyone who is able to help me."

By "high resolution," she means at least 300 dpi. If you can help her out, by all means do so.

I should also note that later, she emailed me saying she was having second thoughts about the title...for a reason those of us on the other side of "the pond" wouldn't immediately get. It turns out that the song "Swing High, Swing Low" is the anthem of the British national rugby team, along the lines of "You'll Never Walk Alone" for Liverpool's famed soccer club. But no matter what it turns out to be titled, it promises to be worthwhile reading.

Meanwhile, Michelle is emulating her subject, though thankfully she has more modern technology at her disposal than Lombard did when she sat down to write... 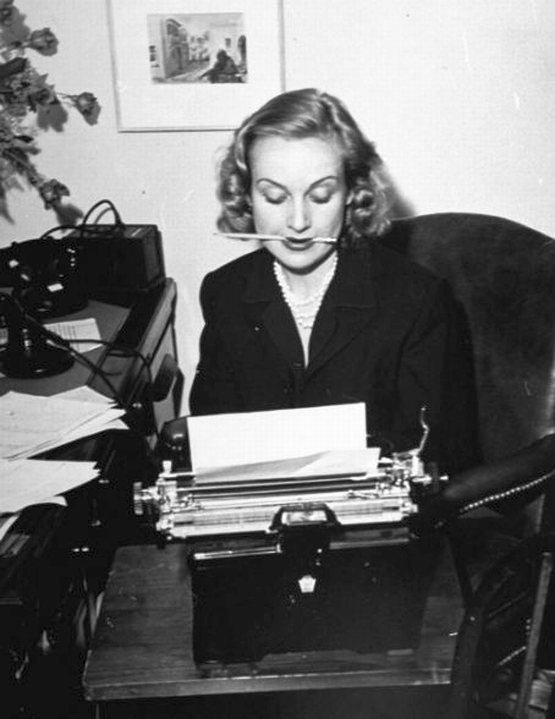