Carole Lombard met, knew and was photographed with many fellow celebrities during her brief lifetime, but when you see her with someone for the first time, it's a pleasant surprise nonetheless. Take the following photo, for instance. Flanking Carole on one side is Jack Oakie, a bit unrecognizable in a mustache, but on the other... 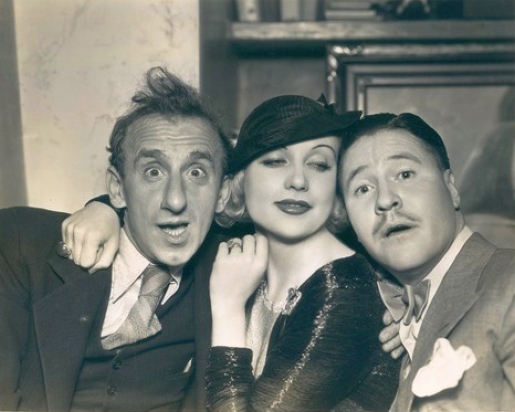 No date is listed for this photo, but from Lombard's appearance and the relatively youthful Durante, I'm guessing it to be from 1933. This would have been about the time Jimmy was making a series of comedies at MGM with Buster Keaton, a teaming that really never quite jelled. Durante would have many future triumphs, particularly his beloved nightclub act.

While we don't know when this was taken, we do know where: 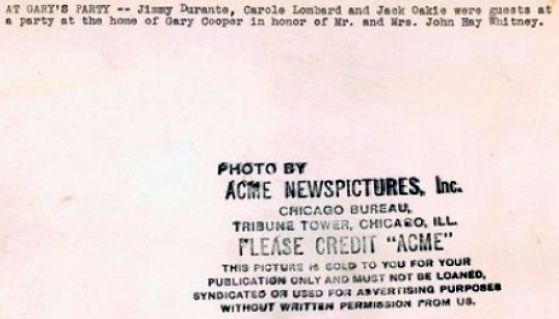 It was at Gary Cooper's house, at a party thrown in honor of Mr. & Mrs. John Hay Whitney. (Mr. Whitney was a major investor in Technicolor, and would be one of the backers in Lombard's Technicolor comedy "Nothing Sacred.") Coop and Carole were briefly an item following her divorce from William Powell, though the affair never amounted to anything.

The same seller has this Lombard rarity, taken Dec. 17, 1937, on the set of "Fools For Scandal"; in fact, it's so early in the shoot that the snipe refers to the film by its initial name, "Food For Scandal": 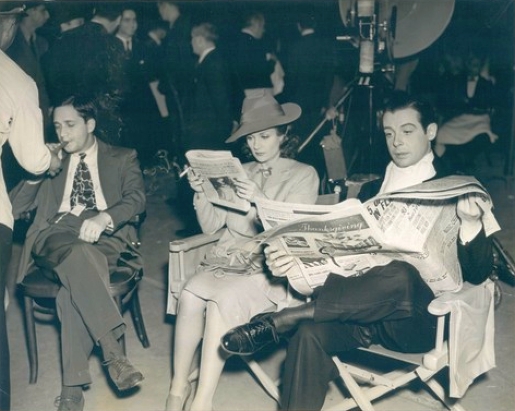 Carole's in between director Mervyn LeRoy and co-star Fernand Gravet, as all wait for electricians to set up lighting. When "Fools" came out some months later, Lombard learned many people preferred to read newspapers than go see this misfire of a movie.