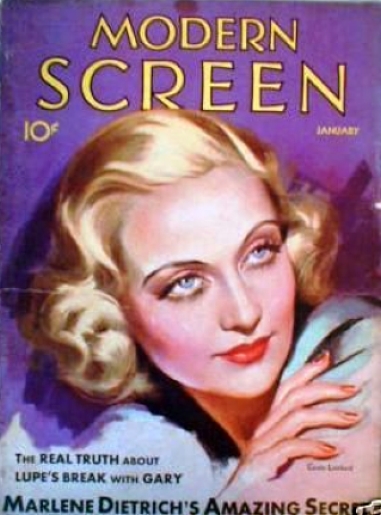 Carole Lombard appeared on the cover of many a movie fan magazine, such as the one above for Modern Screen in January 1931. But over the years, Lombard even graced the covers of fan magazines that more or less had little to do with movies. Here's proof: 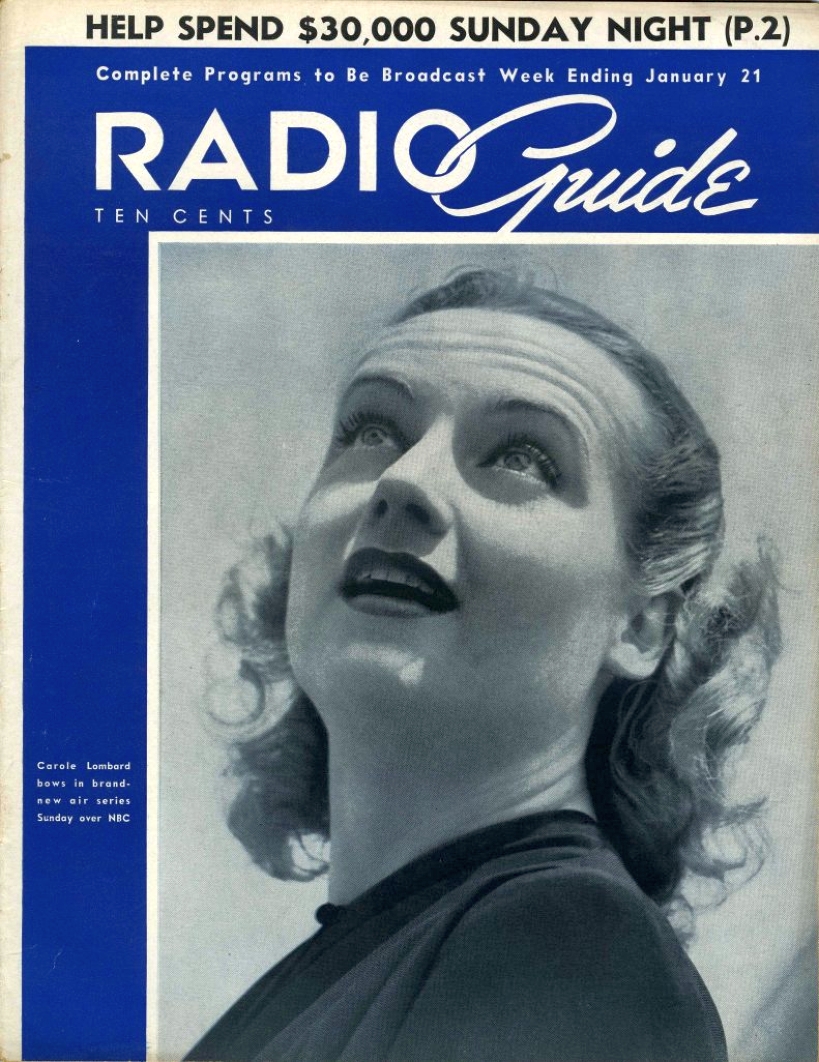 This is from the Jan. 21, 1939 issue of Radio Guide, released at about the same time Carole was to debut in the cast of NBC's new series, "The Circle," which ultimately turned out to be one of the biggest flops in the network's history (although Lombard left the program before its demise). That issue, and 29 others from that magazine, are now available via eBay: 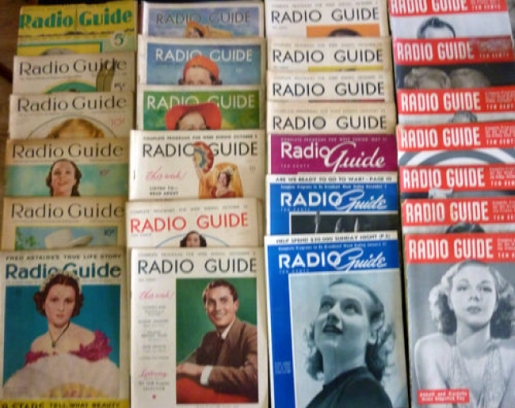 Before providing the particulars of how to get this, some background on Radio Guide, courtesy of broadcast history maven Elizabeth McLeod (her writing in italics, followed by illustrations and my comments):

"'Radio Guide' began in Chicago and New York in November 1931, as a venture of Moe Annenberg, a former hood and strong-arm man for the Hearst newspaper distribution interests in Chicago (his duties usually involved blackjack-and-brass-knuckle confrontations with distributors of rival publications), who went legit in the twenties as publisher of the 'Daily Racing Form.' For about its first year it was presented in a tabloid newspaper format, with most of its editorial content coming from press releases — although New York Journal radio critic Mike Porter and music critic Carleton Smith were regular contributors from very early on." 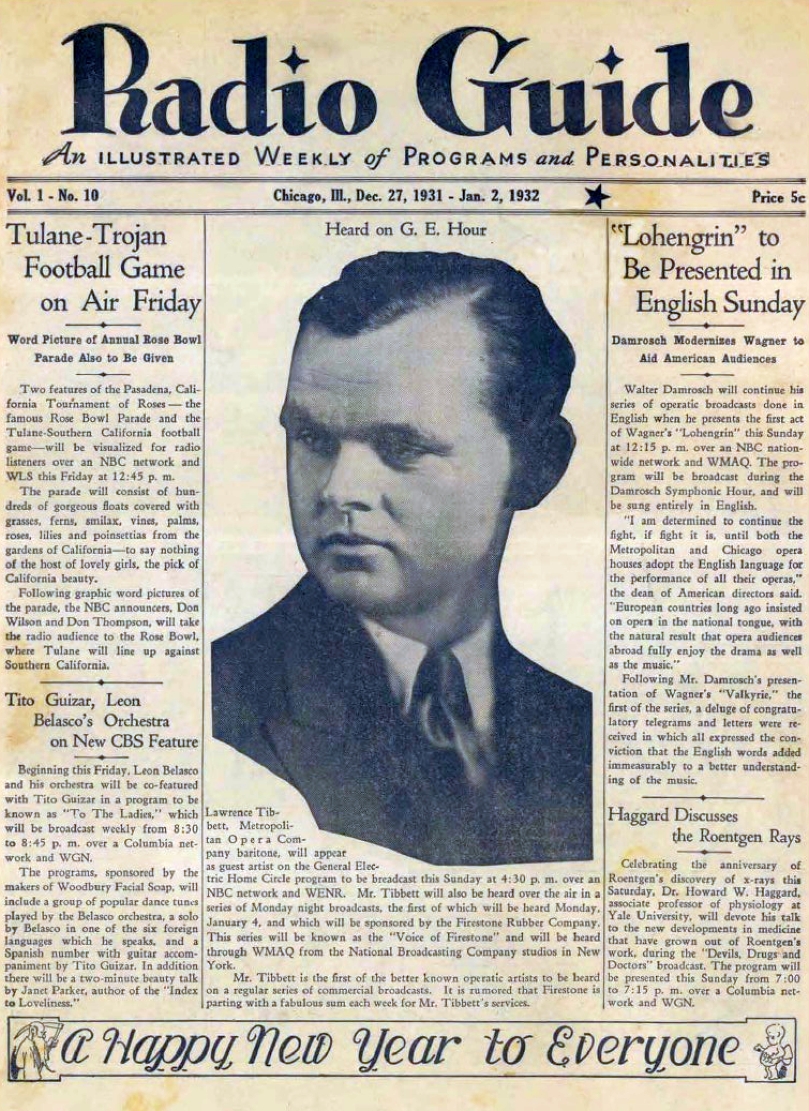 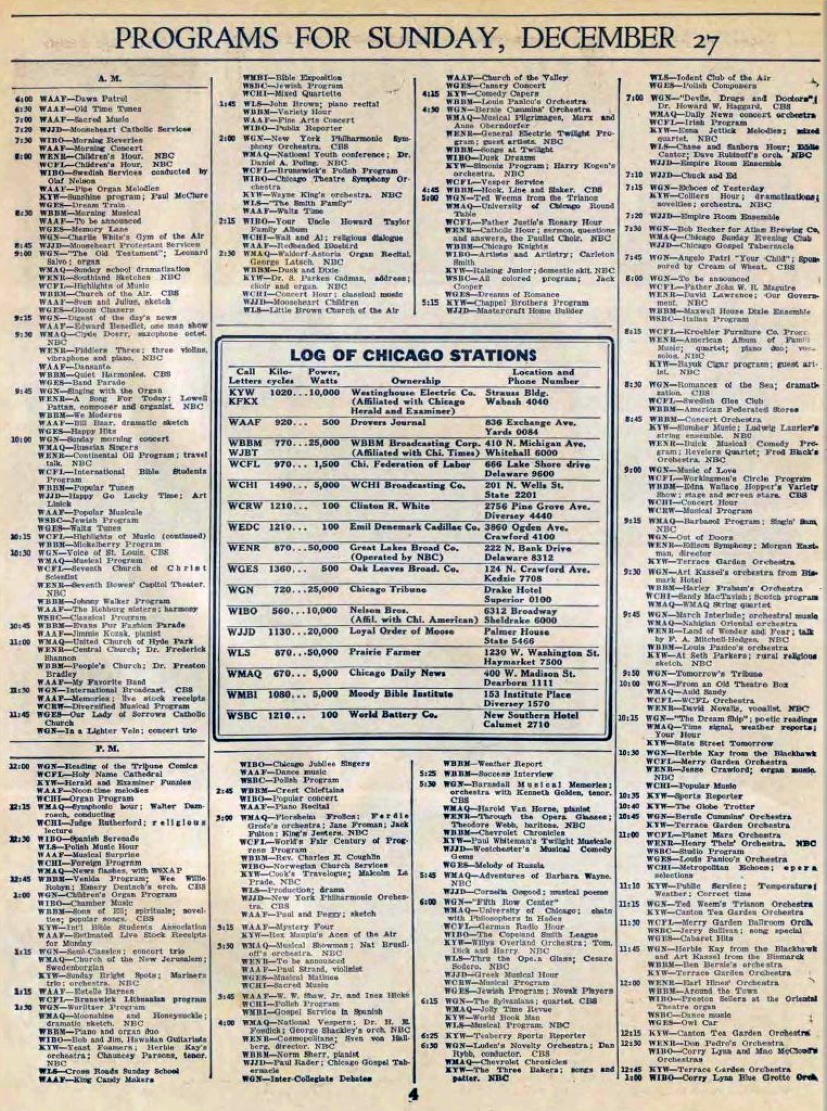 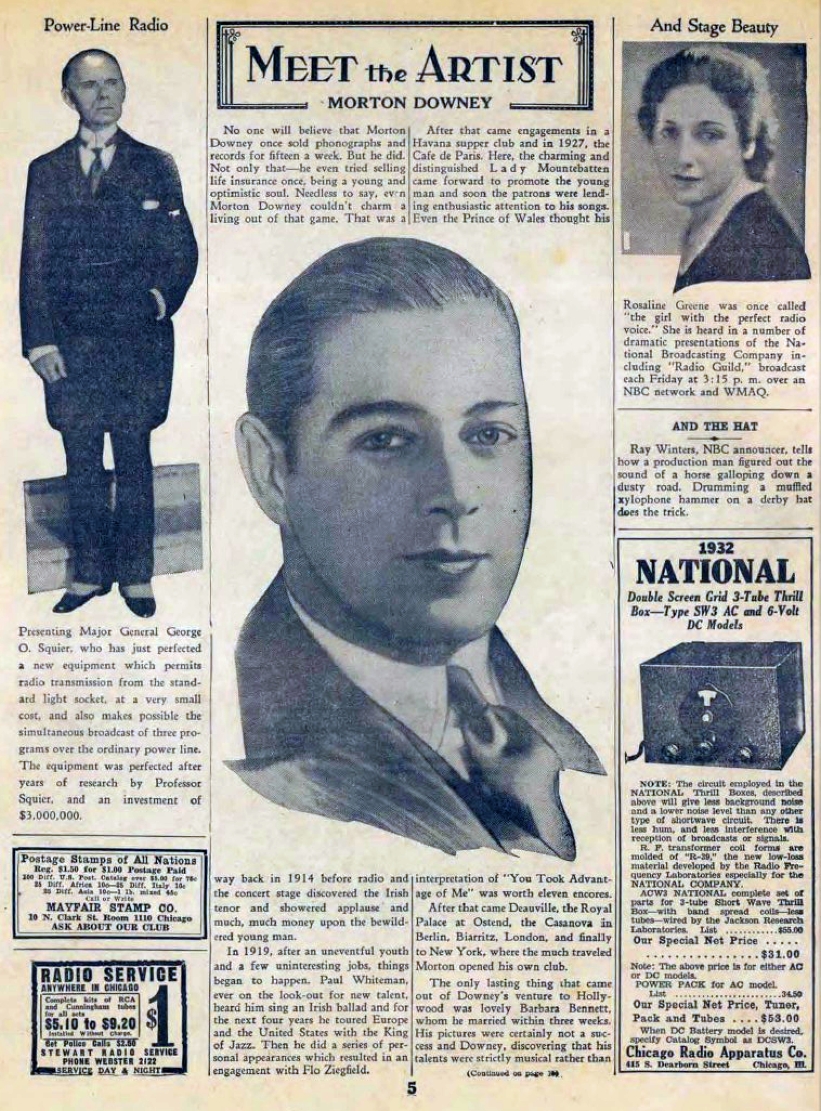 The front-page story on the Rose Bowl says a "Don Wilson" was to broadcast the game. Is this the same Don Wilson who later gained fame as the announcer on the Jack Benny program? Also, note the item on tenor Morton Downey, who married Barbara Bennett (the middle sister between Constance and Joan) and whose son Morton Jr. gained fame (or infamy, depending on your perspective) as a TV talk-show host.

"Beginning in 1933,'Radio Guide' began to feature two-color 'art covers' and was presented in a saddle-stitched large-magazine format. There was also a new emphasis on original editorial content, and Chicago Herald-Examiner radio editor Evans Plummer became a regular contributor with his 'Plums and Prunes' column." 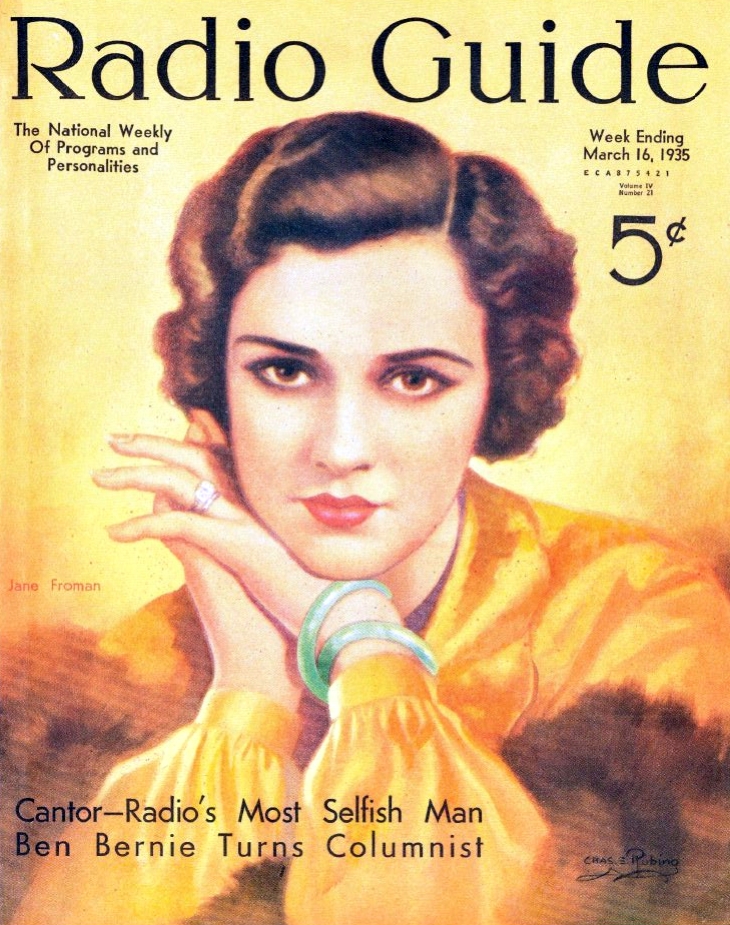 Examples of Radio Guide's full-color covers mentioned below, with Jane Froman and the team of George Burns and Gracie Allen.

"Full color art covers were featured beginning in the spring of 1935, and continued until the magazine switched to black-and-white photo covers in early 1938. Many of these covers were elegant portraits of stars-of-the-moment painted by Charles Rubino, and these issues are perhaps the most collectible of the run. This period also marked the peak of Radio Guide's editorial quality — it published substantial criticism and serious journalism about radio, such as its 1935 expose revealing that elements of 'Major Bowes' Original Amateur Hour' were rigged. 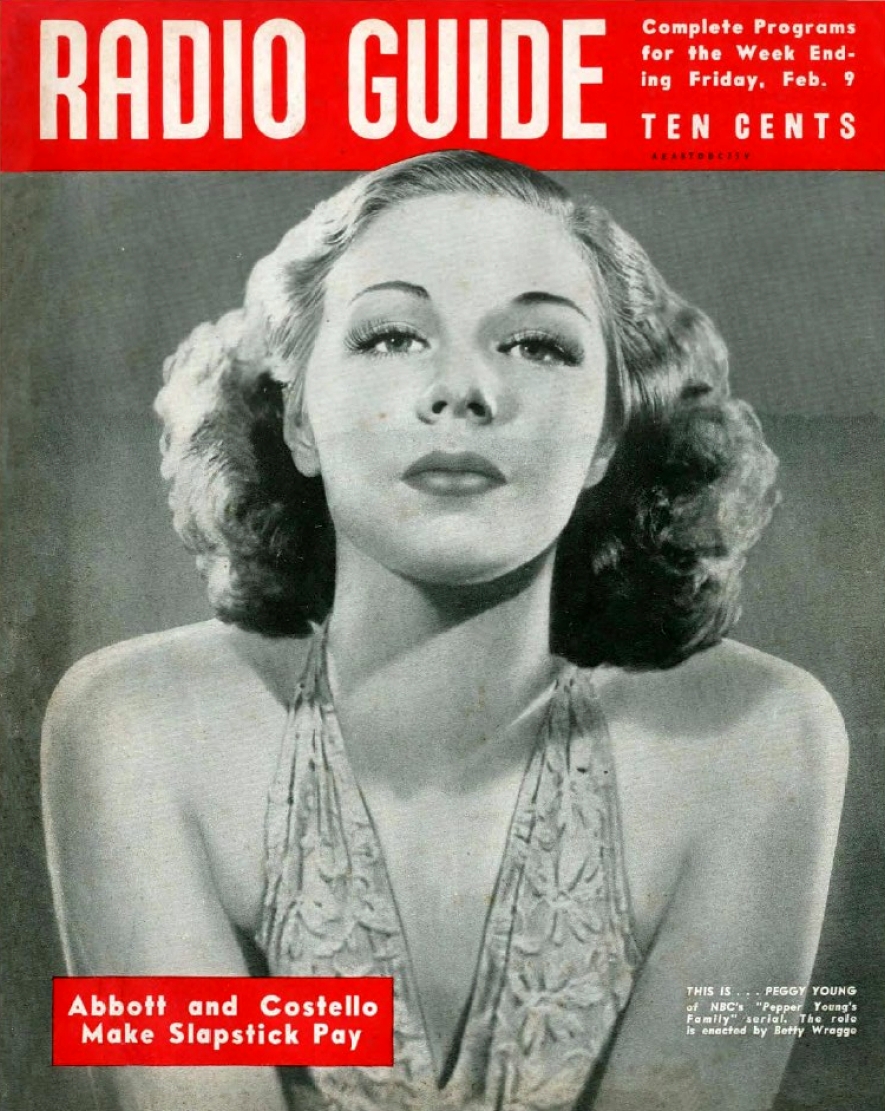 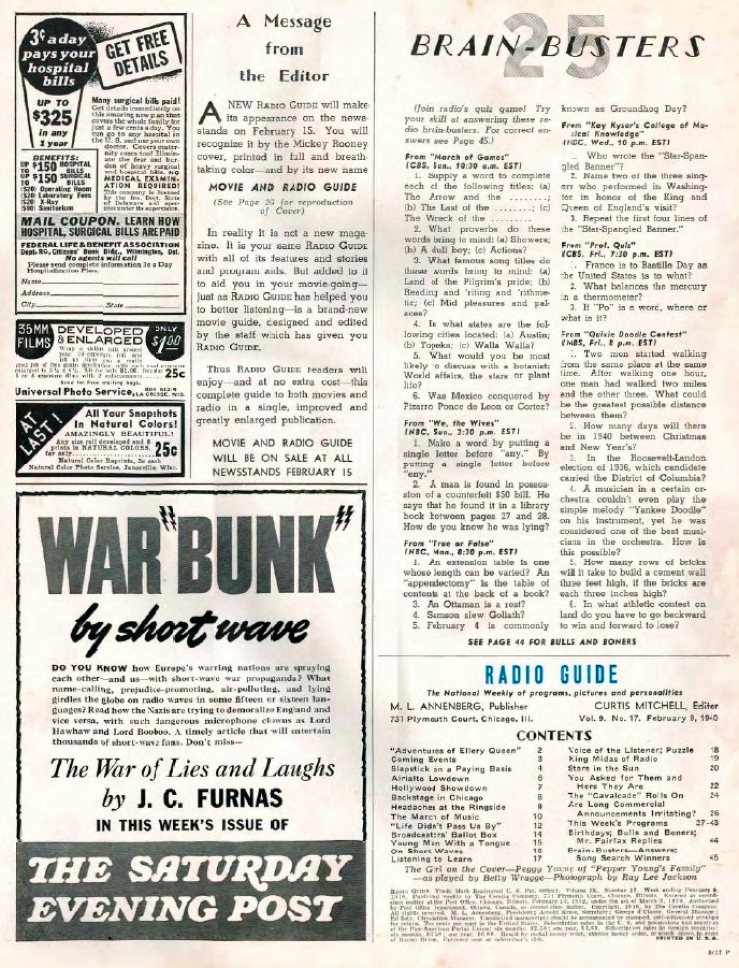 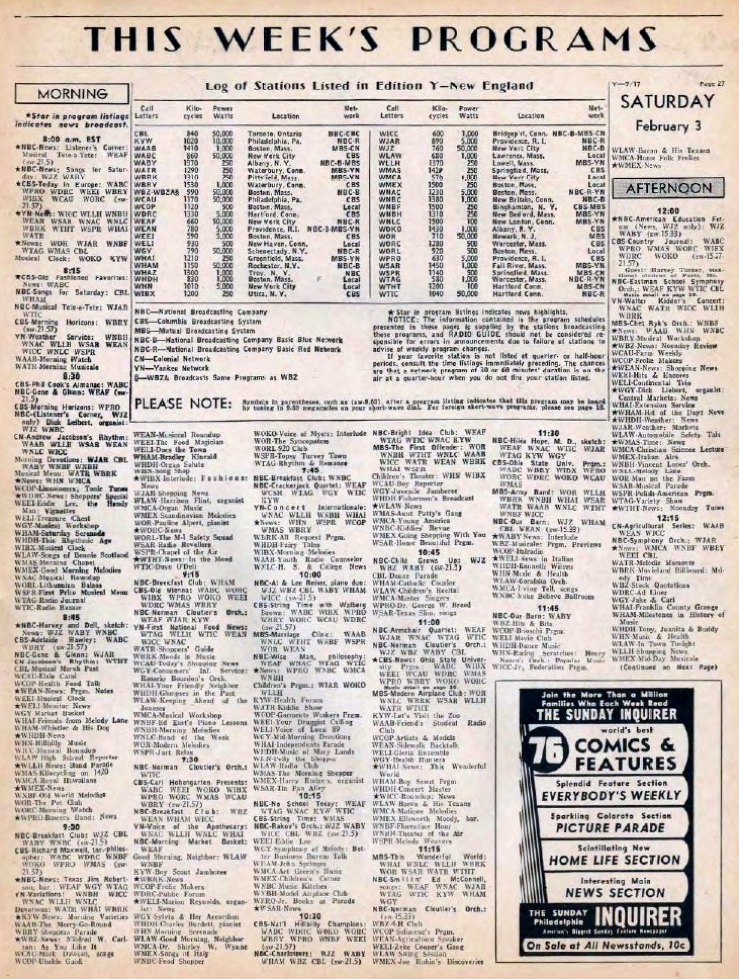 "'Radio Guide' changed both its title and focus in 1940, as a direct result of Moe Annenberg being sent to prison for tax evasion in 1940 -— the magazine was taken over by his son Walter (later publisher of 'TV Guide') and the change to a combination radio-movie format was an attempt to pump up the cash flow by merging 'Radio Guide' with 'Screen Guide,' another troubled Annenberg publication of the era. The transition to 'Movie Radio Guide' was unfortunately accompanied by a sharp drop in editorial quality -- the publication became much more of a shallow celebrity-oriented fanrag, rather like what's happened to 'TV Guide' over the last twenty years." 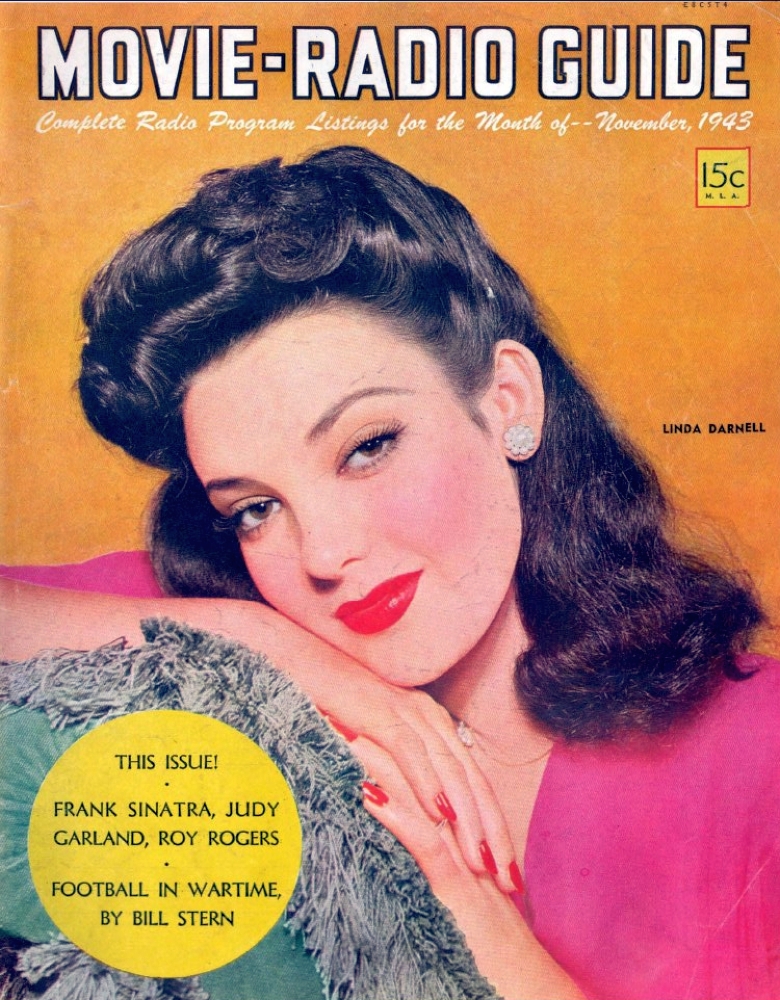 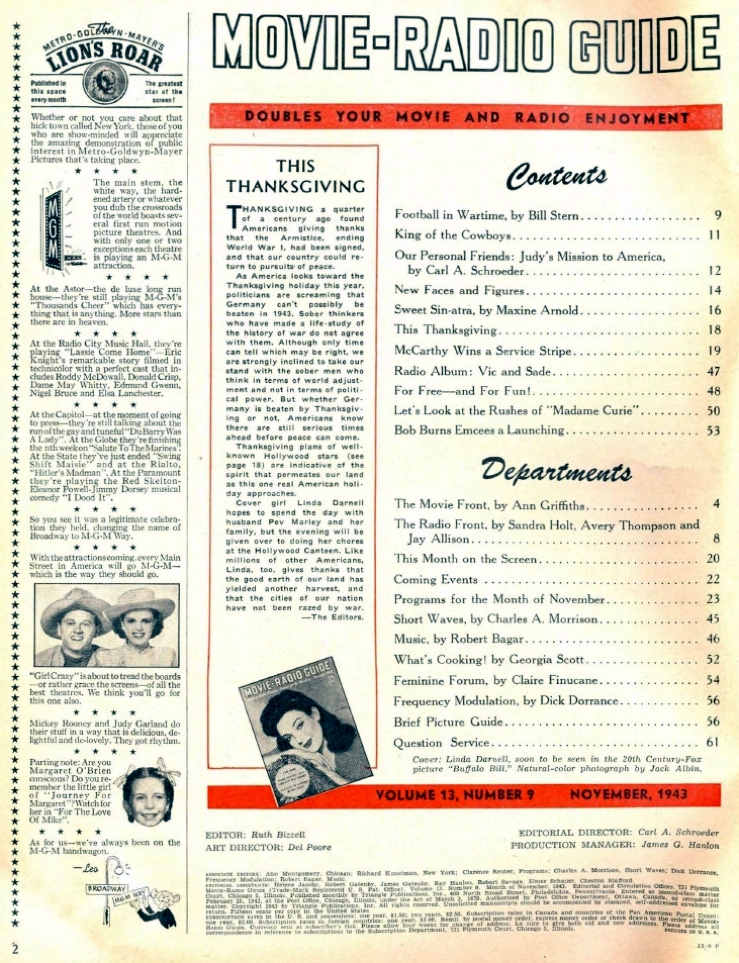 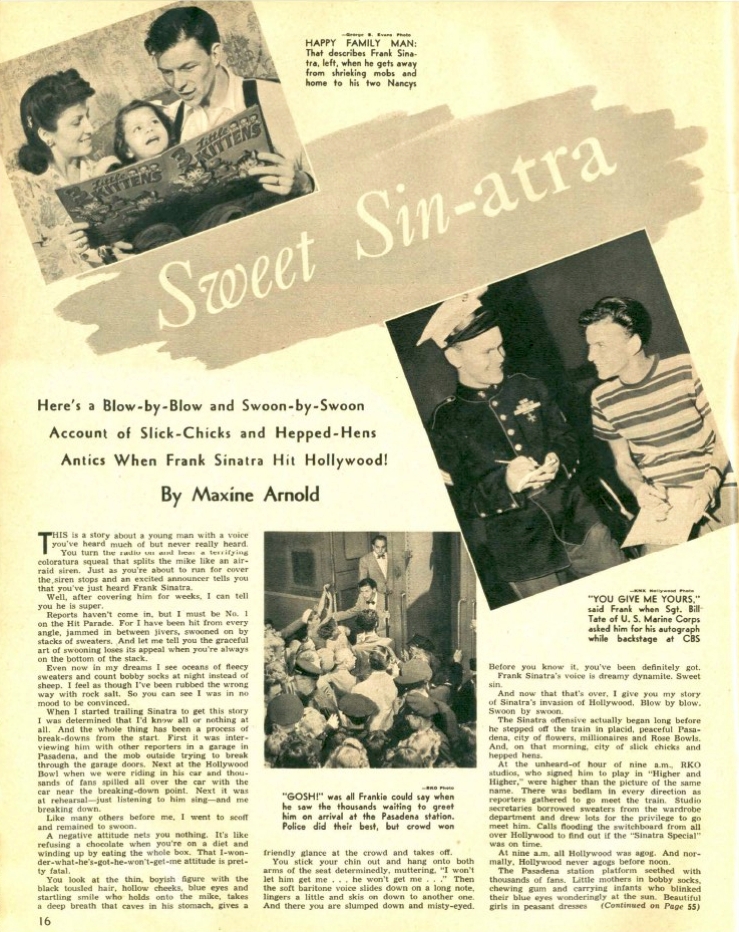 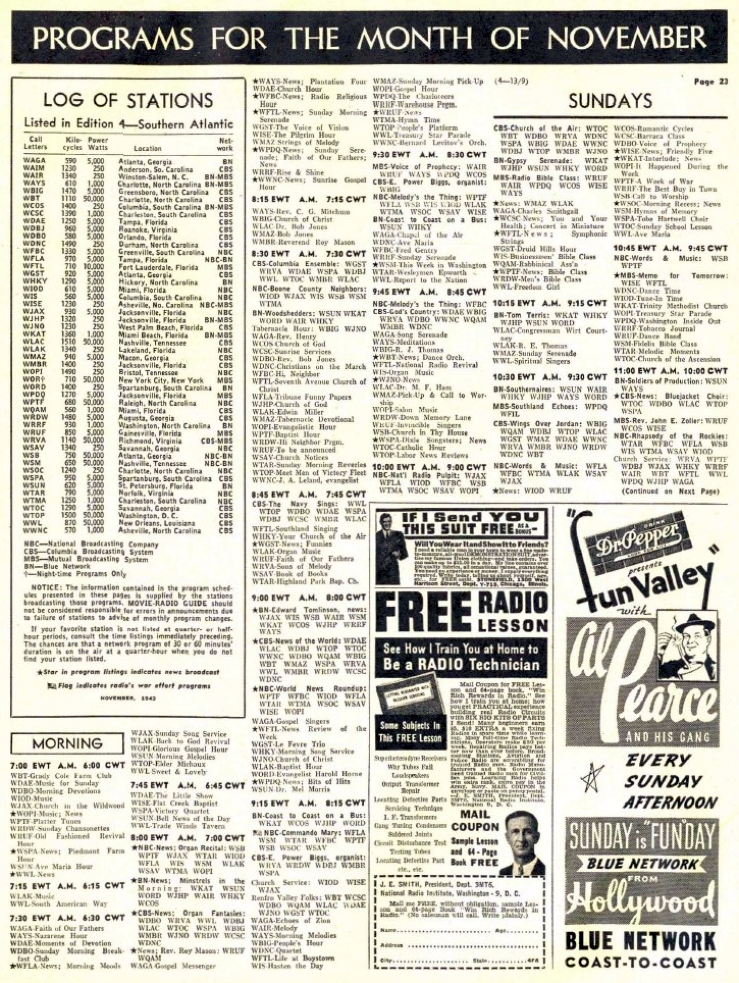 Movie-Radio Guide in November 1943, near the end of its run.

"'Movie Radio Guide' ceased publication at the end of 1943, as a casualty of the wartime paper shortage. The magazine had tried several strategies for reducing page count during 1942-43, and switched to a monthly format in early 1943, which continued until the publication went out of business at the end of the year."

So while Radio Guide and TV Guide both were Annenberg publications that largely followed the identical formula -- regional broadcast listings complemented with entertainment stories -- there was no continuous lineage.

The issues available via eBay date between Aug. 11, 1934 and the Feb. 9, 1940 issue, pages of which were seen above. There are multiple copies of three 1937 issues, and aside from pencil scrawls on the cover of one 1938 issue, all are in good shape.