1931 was the year Carole Lombard (shown in Paramount p1202-136) graduated from starlet to leading lady, although true stardom wouldn't come for another three years. However, she already was known for her way with fashion, and a fan magazine that year took advantage used that skill for a two-page photospread with four pics of Carole and one from Paramount stablemate Claudette Colbert:

From the references to spring, this probably came from an issue dated March or April, though I don't know which magazine this is from (and I presume there's not enough information on the reverse of either to let the seller know, either).

If the frock Lombard is wearing in the lower right-hand corner of the first page looks familiar to some of you, that's because she almost certainly wore it in one of her films with William Powell that year, "Man Of The World": 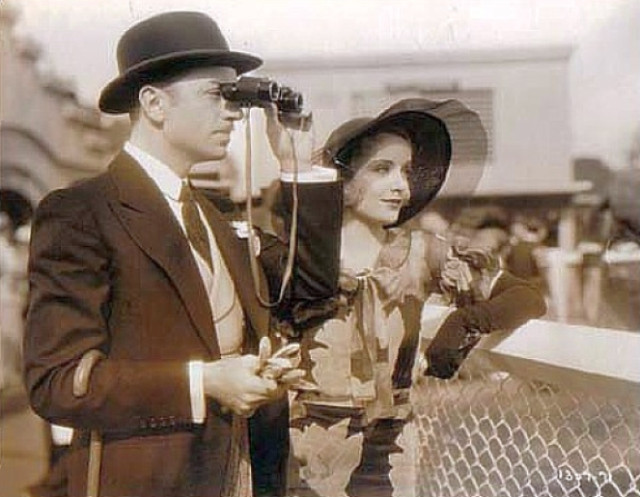 The other photo on that page is a gown in turquoise blue satin (colorizers, fire away!).

In addition to Colbert's gray tweed suit, "designed for sports and street wear," the second page features Carole "in a frock of gray chiffon and atom-like crystal beads," as well as one of beige roma crepe with three-quarter sleeves bound in blue fox fur, which "shows the Russian influence." (We'll take their word for it.)

Each page measures 11 1/2" x 8 1/4", and the seller says it will be mailed "flat in protective sleeve with thick card backing and Do Not Bend on package."