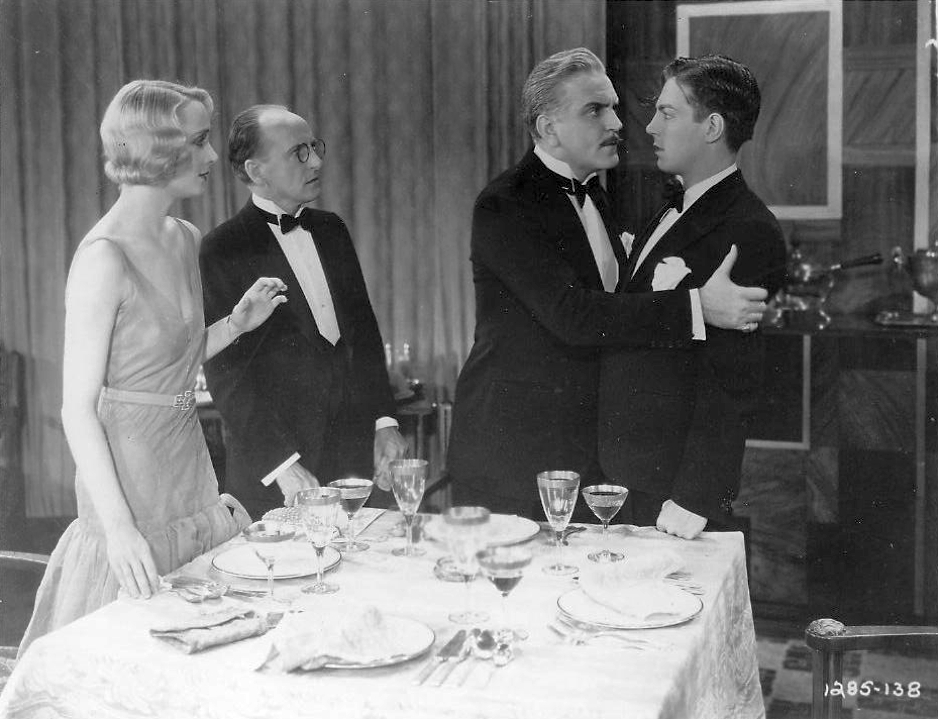 "Fast And Loose" was the only film Carole Lombard made in New York, and it afforded her nearly two months in the city (http://carole-and-co.livejournal.com/444609.html). It also gave her exposure to the New York press -- not only newspapers, but the eastern branch of many fan magazines.

That includes Picture Play, much of whose output from 1929 to 1933 is now available online (http://carole-and-co.livejournal.com/528880.html). One of its writers, Malcolm H. Oettinger, interviewed her at Paramount's Astoria Studios in Queens and came up with a story, "Another Three Cheers!", which ran in the December 1930 issue.

From reading it, I'm guessing either Oettinger made up some of her quotes or that Lombard -- trying to cover some of her past tracks and reinvent herself -- altered some of her history. We know she did not jump directly from Fox to Mack Sennett, for instance, and the story of how she got her name is absurd (she adopted it before going to Fox). Nevertheless, this is a nice snapshot of a star on the rise: 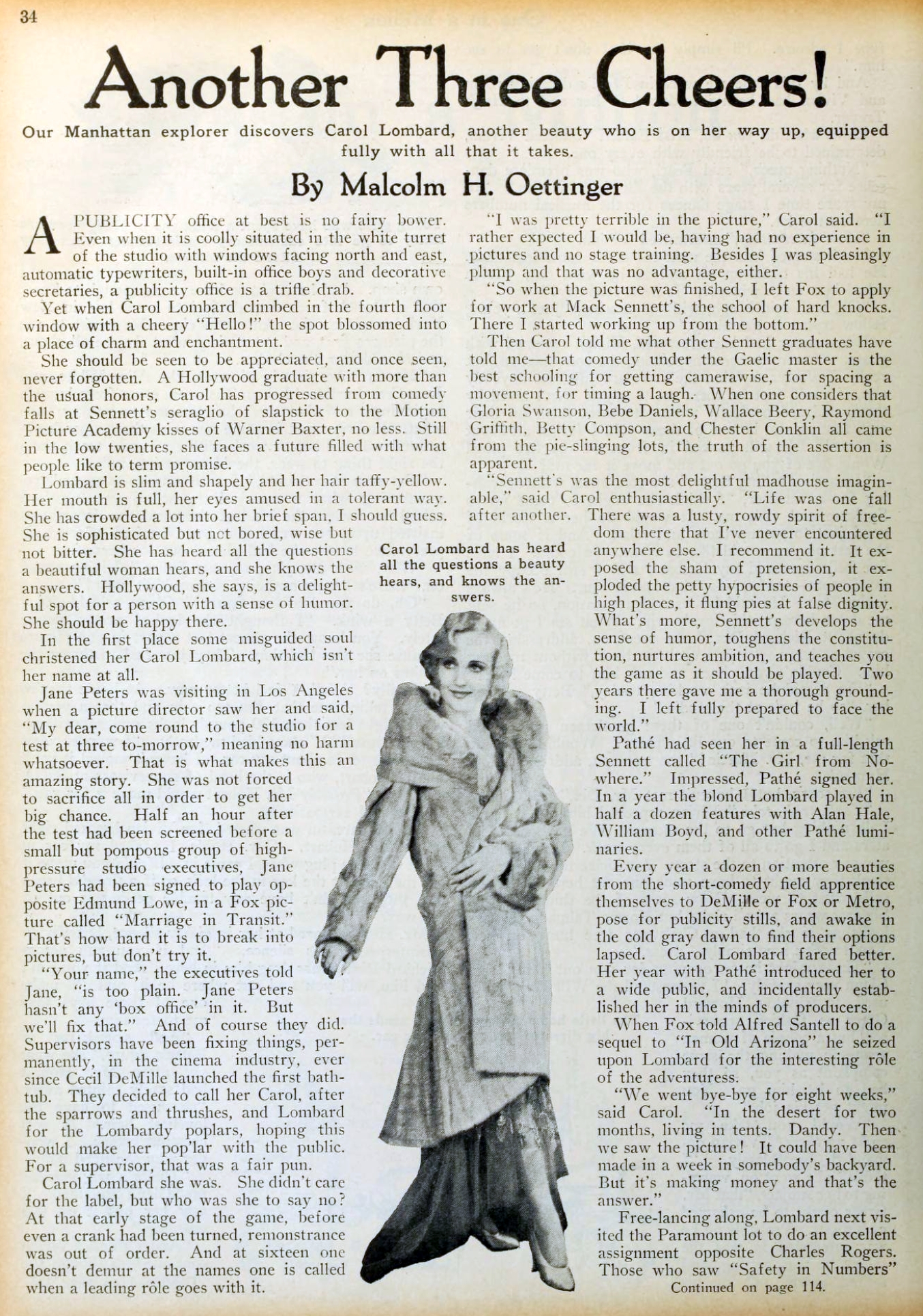 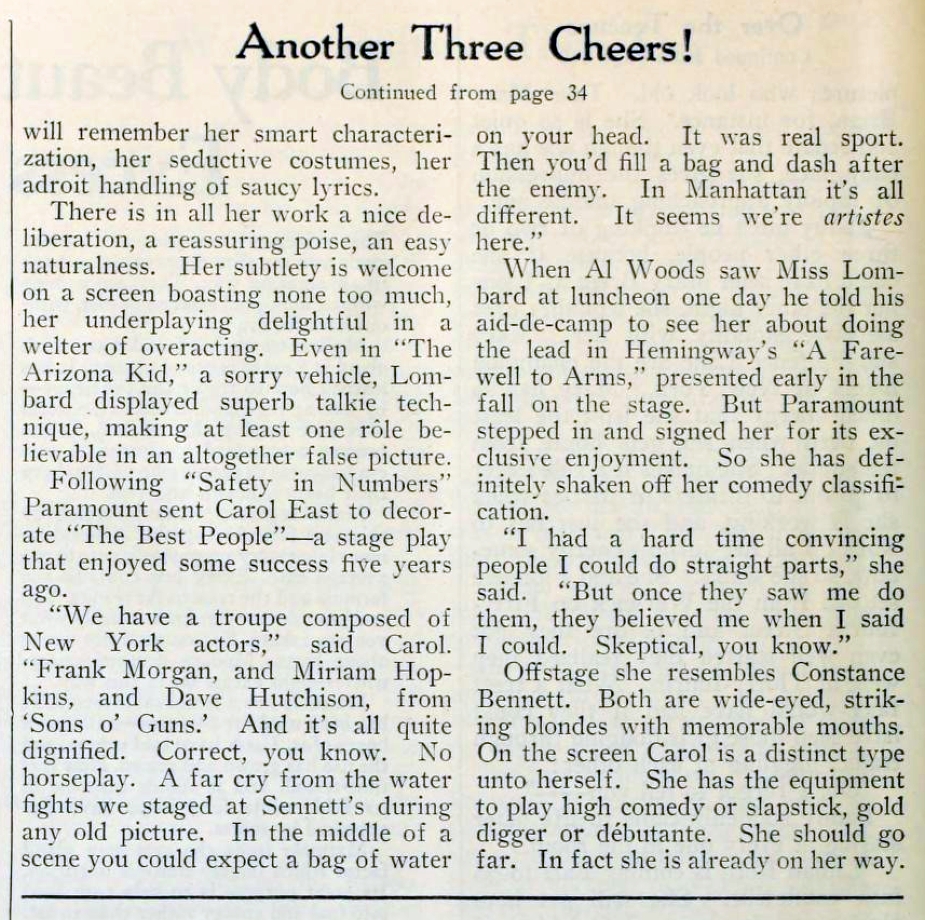 The first page of the article even had a portrait of Lombard facing it -- her first after being signed as a Paramount player, p1202-1, taken by Herman Zerrenner in New York (http://carole-and-co.livejournal.com/488287.html). Carole Sampeck of The Lombard Archive once described it "as being full of joy, hope, unlimited possibilities," a mood the article certainly shares: 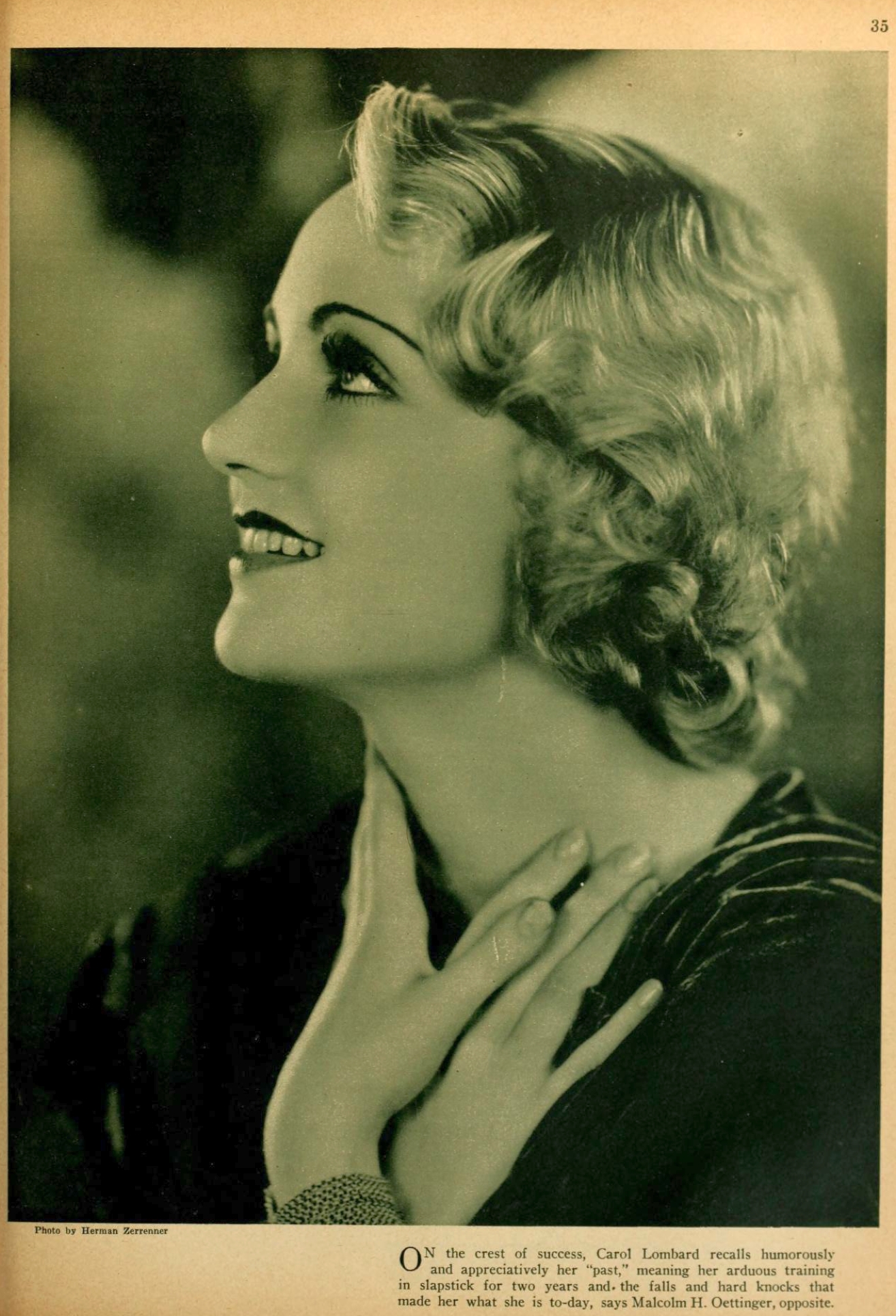 Picture Play's people must have liked Lombard so much that they wanted her to stay in town, or at least make plenty of movies there; at least that's the impression you get from another part of that December 1930 issue. One of its regular features was a New York-based gossip column called "Over The Teacups," credited to "A Bystander," who had "conversations" with an equally fictitious person called "Fanny the fan." Part of that month's column featured this exchange: 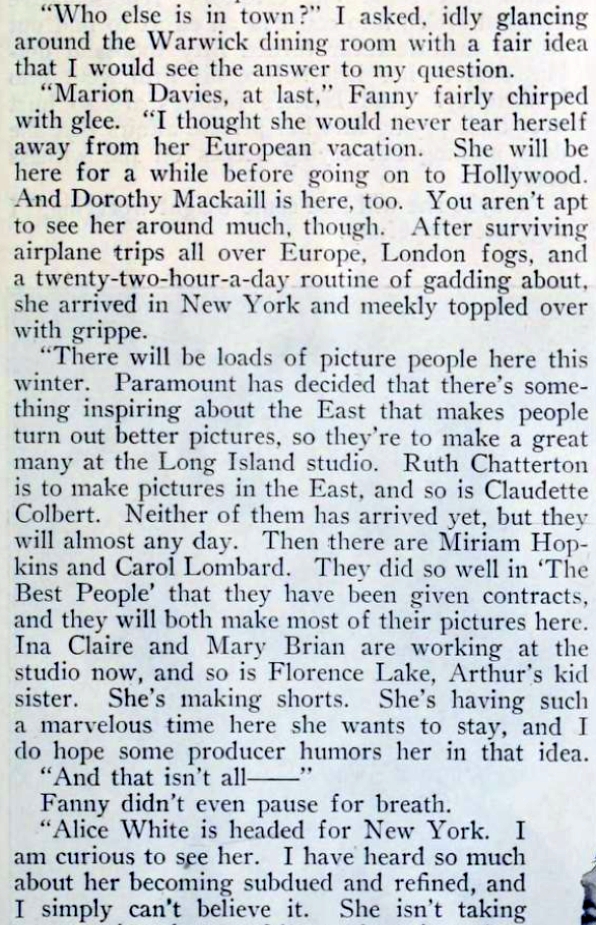 "The Best People" was the name of the play from which "Fast And Loose" was adapted. It's entirely possible Lombard might have made more films in New York -- but in 1931, the bottom fell out of the U.S. economy (turning the October 1929 crash into a full-fledged depression), and Paramount found it best to consolidate its feature film operations out west. By this time, most of the top performers and writers had already left for southern California.

That issue also featured photos from the film, including one with Lombard: 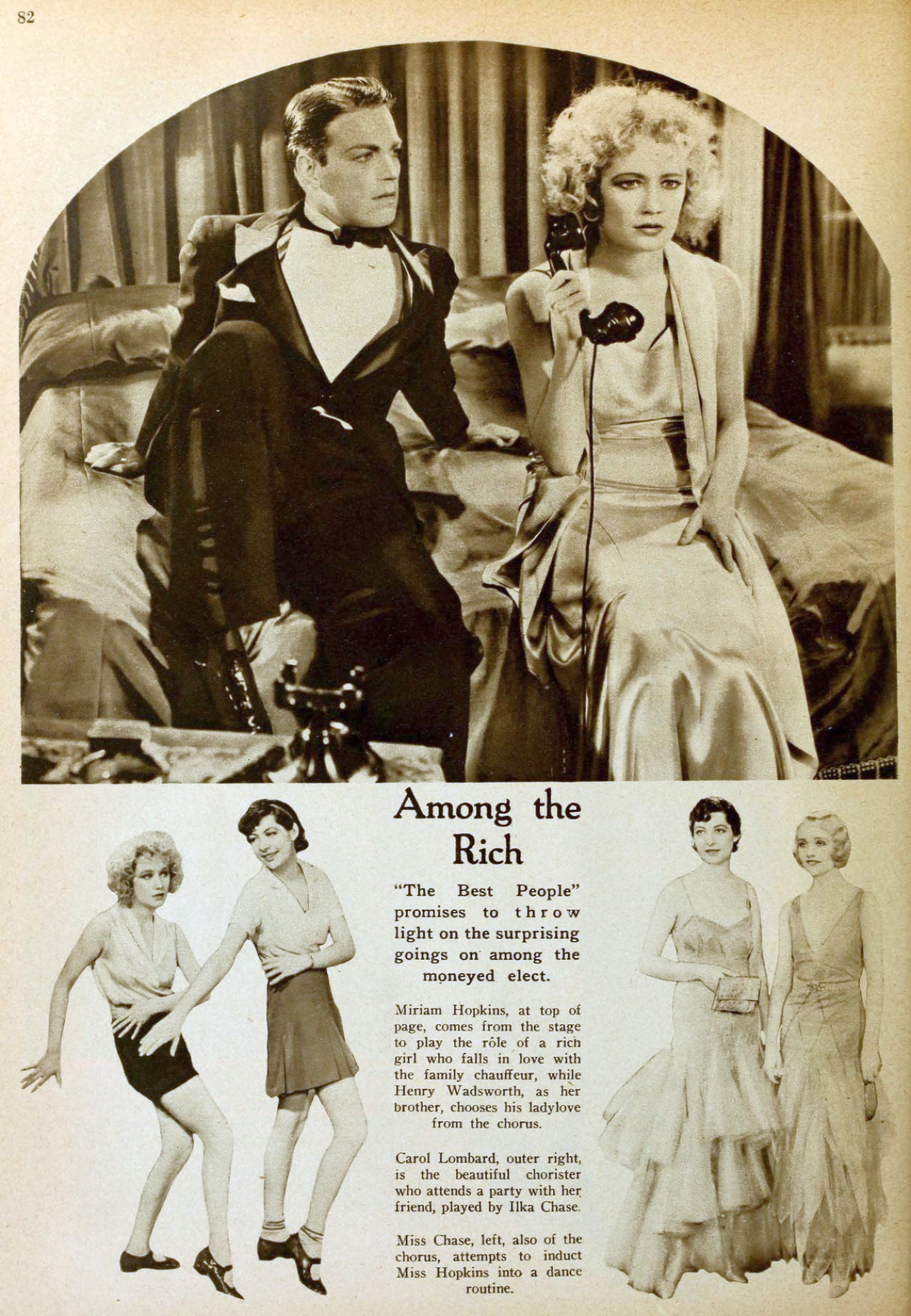 As for the film, Picture Play reviewed it in its March 1931 issue and gave it restrained approval...though it believed one of its players was miscast: 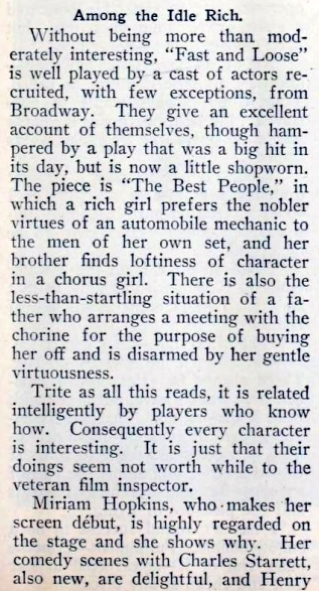 This week's LiveJournal header shows Carole in her Sennett days, staring down at Billy Bevan in 1928's "The Bicycle Flirt." The other man in the picture is Vernon Dent, later a frequent foil in the Three Stooges' Columbia shorts.
Collapse