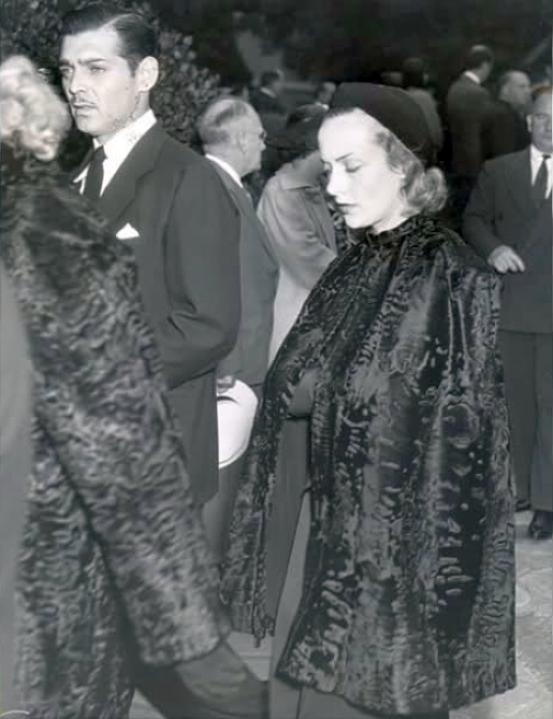 As we did on March 3, 2011, the usual Carole Lombard avatar has been replaced by that of Jean Harlow. However, 15 months ago, we were celebrating the centenary of Jean's birth; today marks a more solemn event, the 75th anniversary of Harlow's death.

The photo above is of Lombard and Clark Gable attending Harlow's funeral at Forest Lawn in June 1937. One can only imagine what was going through each of their minds at the time.

Carole apparently hadn't known Jean all that long, since about 1935 (http://carole-and-co.livejournal.com/460141.html). But they soon became good friends, though no photographic documentation of them together has surfaced. From Lombard's part, she may have been curious about Harlow's relationship with her ex-husband William Powell, with whom she still was on good terms. Jean may have wanted to find out from Carole what made Bill tick.

Lombard, who earlier in the '30s had often felt herself to be a sort of jinx because so many people she was close to -- Diane Ellis, Lilyan Tashman, Russ Columbo, Dorothy Dell -- had died before their time, probably wondered whether ill fortune had struck again. 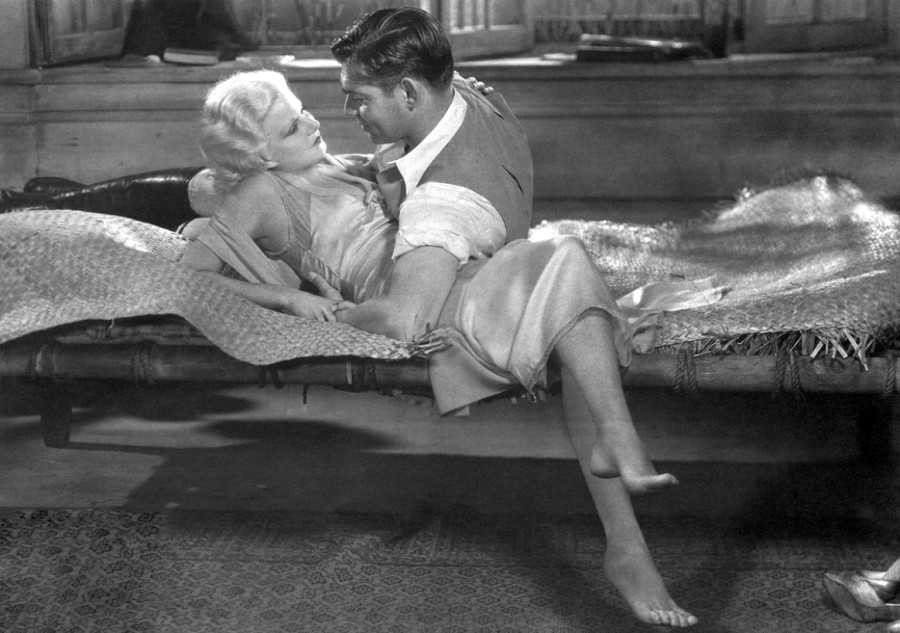 Clark had made some of his steamiest movies with Jean (such as "Red Dust," above), but the sensual sparks they showed on screen didn't carry over away from the set. Gable's characters may have bedded Harlow's, but their real-life counterparts probably never did. There was a closeness between them, but it was strictly friendship -- Clark admired Jean's resolve in the face of all that fate had handed her, such as the mysterious death of Paul Bern after barely two months of marriage.

Like Gable and Lombard (who by now were seen regularly in public even though they couldn't yet marry), Harlow was popular with movie crews and people in the industry for her lack of airs and genuine concern for others. The story goes that after Jean's death was announced, the MGM commissary -- normally abuzz with all sorts of conversation -- became incredibly quiet, so shocked and saddened were those at the studio. 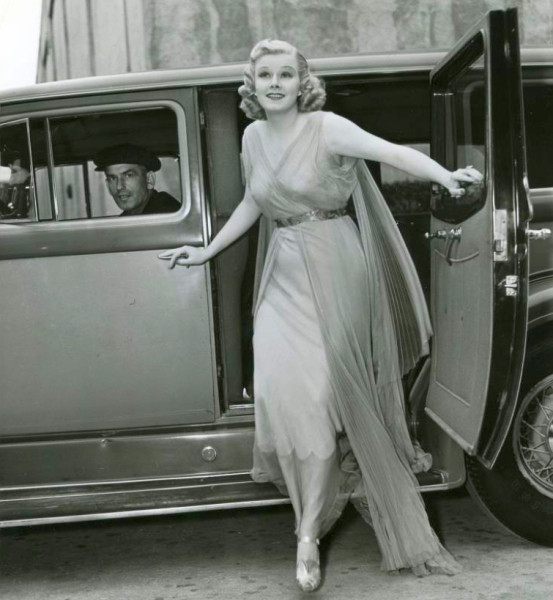 Harlow's final days also were filled with physical pain that probably was nearly unbearable. Visibly bloated when seen entering MGM's stage 9 on May 29 -- as it turned out, the last day she would appear at the studio -- "Bombshell" author David Stenn wrote that several days later, when Gable and "Saratoga" producer Bernie Hyman came by her house to check her status, they discovered the bloating had intensified; bending down to greet her, Clark could smell urine on her breath. He later said it was "like kissing a dead person, a rotting person...it was a terrible thing to walk into."

Not long afterward, a doctor diagnosed acute nephritis, or kidney failure. He feared it was too late, and it was; by June 5, Harlow had contracted uremia, a toxic by-product of kidney failure. It turned out that the scarlet fever she had suffered at age 15 in 1926 had led to glomerulonephritis, a disorder that slowly caused her kidneys to deteriorate. Today, kidney disease can be treated with dialysis, antibiotics, even transplants. But medical science in 1937 had yet to discover such things.

Early in the evening of June 6, Harlow was taken to Good Samaritan Hospital, assigned to room 826. At 9 a.m. the following morning, she slipped into a coma, and died at 11:38 a.m. 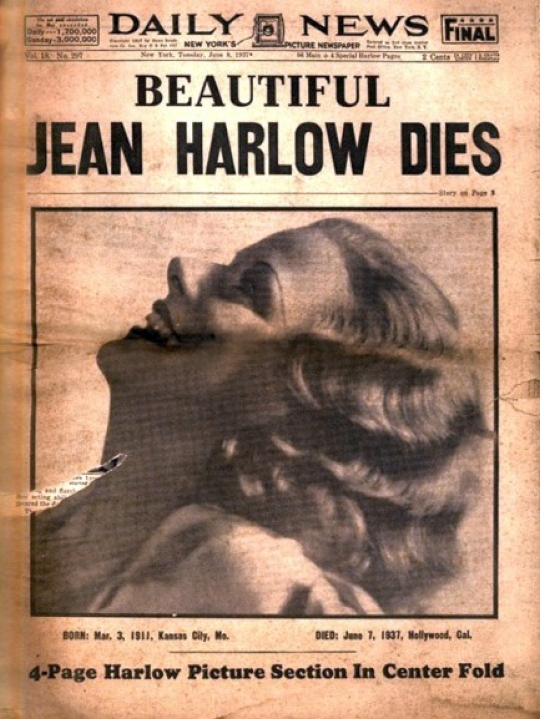 There had been isolated news reports that Harlow was gravely ill, but few knew the severity of her condition. So when her passing was announced, it came as a substantial shock, and the New York Daily News, then the largest-selling paper in America, not only put her on the front page, but added a special four-page section. Small-town newspapers, such as the Waynesboro News-Virginian (where I once worked for 17 months), were somewhat more restrained, but there it was also big news: 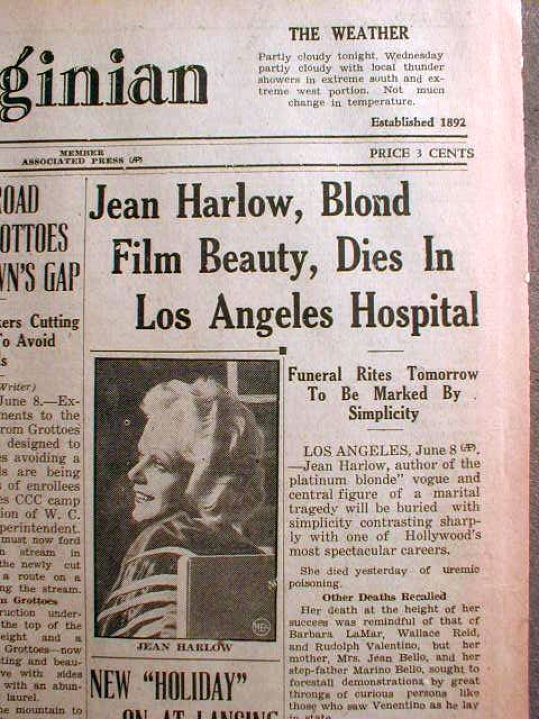 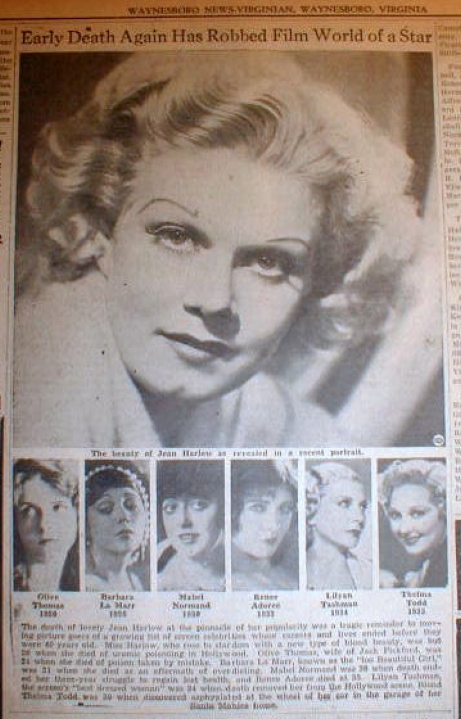 The Associated Press report in the News-Virginian stated Harlow would be buried with simplicity; instead, Stenn wrote, "Her funeral was a spectacle." Some non-celebrity friends of Jean's were on hand, but most of those who were invited to the Wee Kirk o' the Heather chapel were Hollywood notables and Jean's family. Onlookers jammed the area near Forest Lawn despite tight security, and Lombard was appalled by the way Harlow was treated in death, telling Gable that if such a time ever came for her, she wished her funeral be conducted in genuine simplicity. 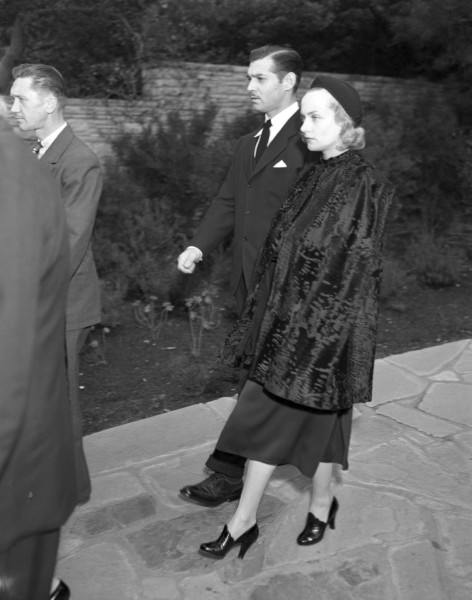 Little did either know that less than five years later, he sadly would have to carry out her request.

Harlow, like other icons such as Lombard, Marilyn Monroe or Elizabeth Taylor, certainly was beautiful, but Hollywood has always had beauties. Other qualities set Jean apart, and give her lasting power. She had sex appeal, to be sure, but combined it with an inherent likability that made her popular with both genders. She worked hard at her craft (compare her early films with those made a few years later for proof), and became not only a good actress but a stellar one, particularly in comedies. While neither Harlow nor Lombard truly could be labeled as intellectuals, both were bright, active women who enjoyed reading (and, in Jean's case, writing) as well as sports.

To commemorate Harlow's angel day, some photos of one of filmdom's most beloved personalities -- many taken from Darrell Rooney's fine Facebook site devoted to the actress, "Fans Of A Jean Harlow 'Centenary' Book For 2011," https://www.facebook.com/groups/112797408763424/. (That "centenary" book, "Harlow In Hollywood," is one of the best books on Jean, providing a view of her few had previously explored.) 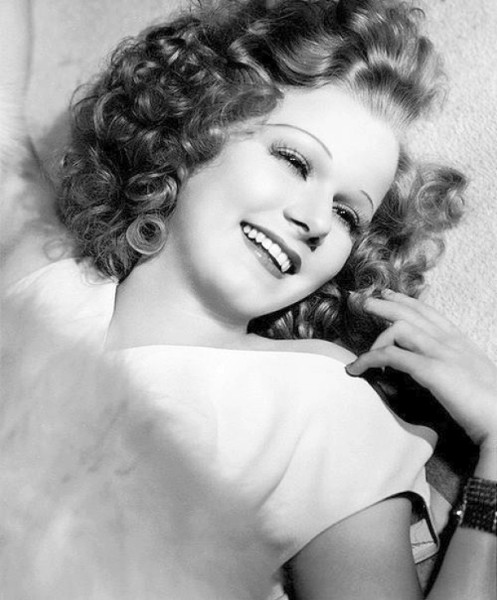 A screen test for "Dinner At Eight," where Jean would more than hold her own with an all-star cast: 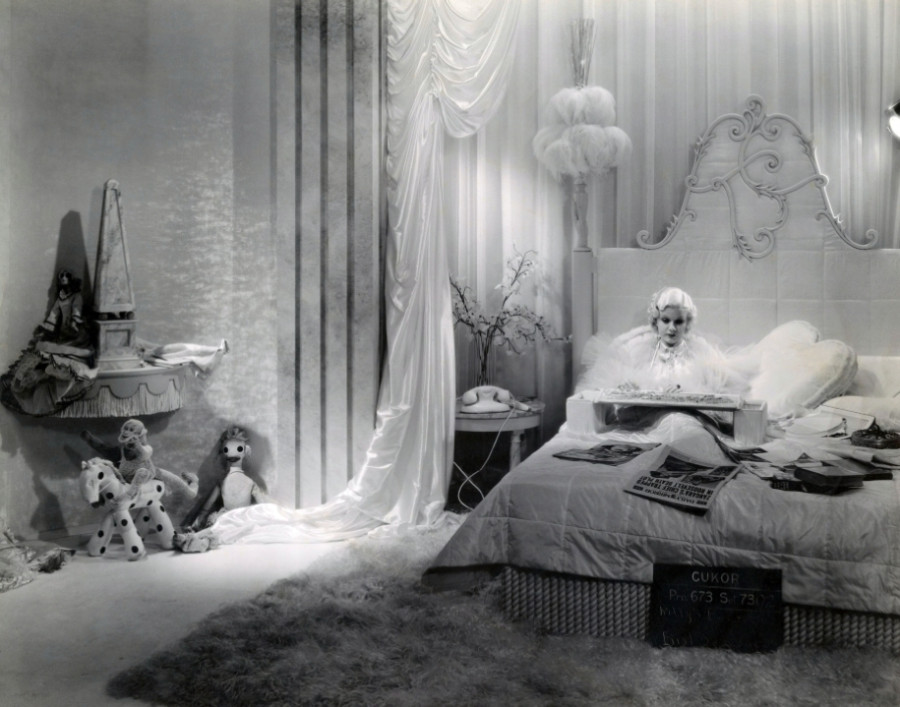 Believe it or not, Jean lived to see television...or at least this early demonstration of it in February 1932: 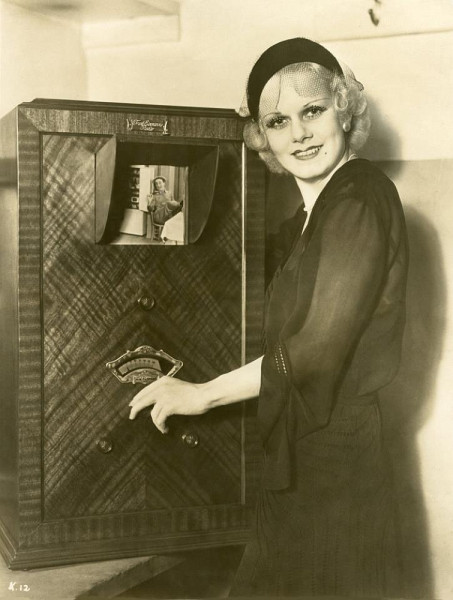 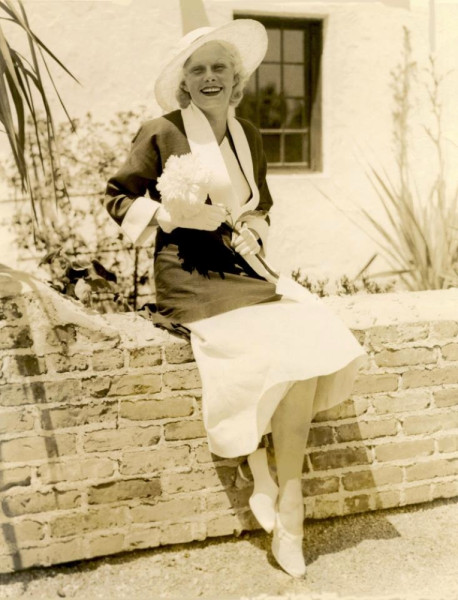 Now, several photos from the last few weeks of Jean's life, beginning with birthday celebrations for Lionel Barrymore on April 29, as Gable discusses something with guest Myrna Loy: 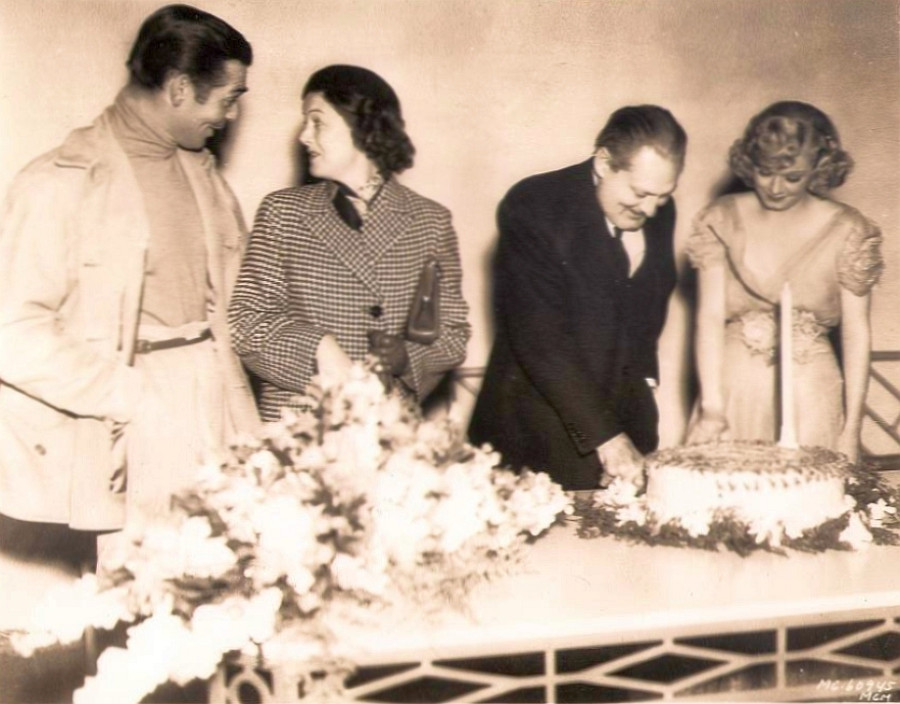 On May 10, she was photographed walking on the MGM lot... 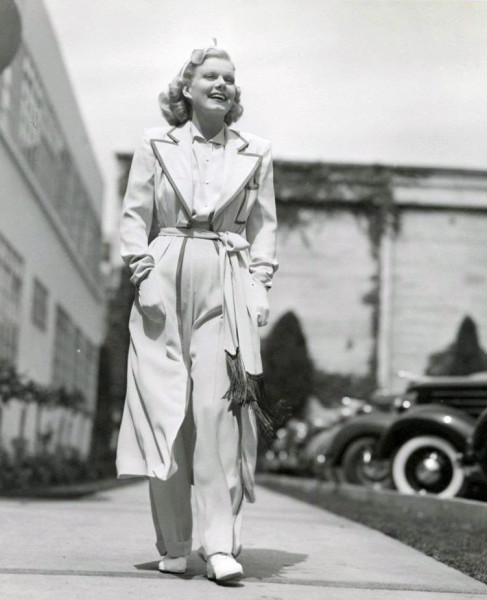 ...pictured in between MGM "fixer" Eddie Mannix and Robert Montgomery... ...and finally with MGM hairdresser Peggy McDonald, who later would be among those tested to serve as Harlow's "double" in order to complete "Saratoga." (Louis B. Mayer initially wanted to scrap the Harlow footage and reportedly asked Lombard to take over the role, but she declined.) 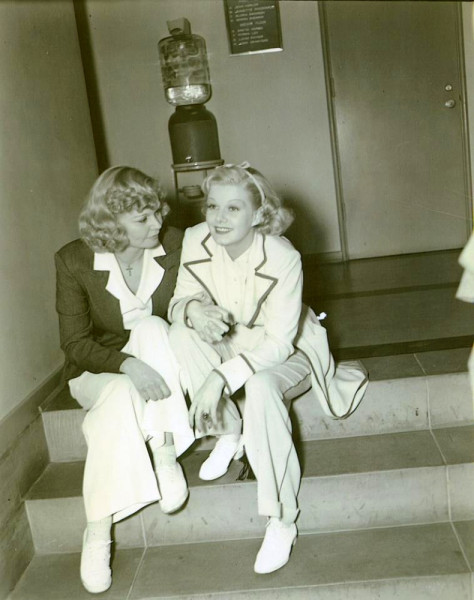 Note the directory of the female stars' dressing rooms on the wall behind them; Jean occupied room "A" on the upper level. Later in 1937, the board would look like this: 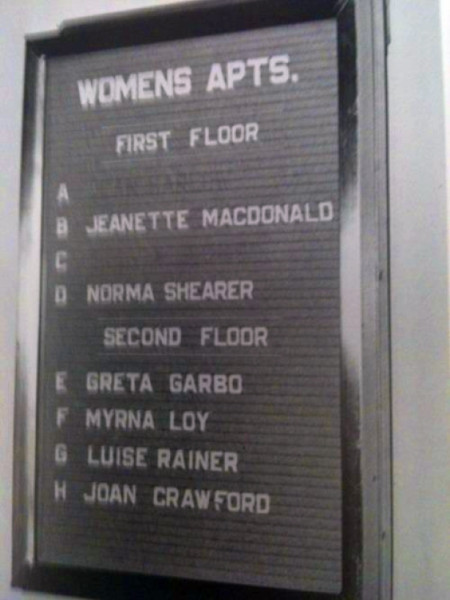 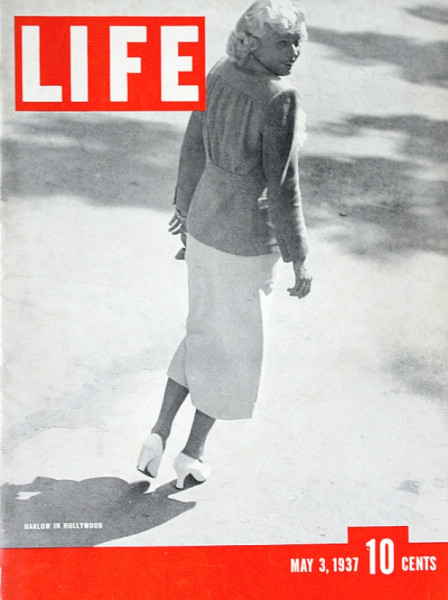