Carole Lombard ranked among the greats of classic Hollywood as a subject of portrait photography. The above pic, taken by George Hurrell, is proof.

Incidentally, take a look at what's behind Carole...cellophane. Why? As Virginia Postrel postulates at "Deep Glamour," a splendid site (http://www.deepglamour.net/deep_glamour/2010/03/glamorous-materials-satin-lacquer-diamonds-fur-andcellophane.html), "In Hurrell’s photo, the shimmering plastic catches the light, creating a cool, translucent contrast to the soft opacity of Lombard’s feathered dress and the warmth of her skin. If you don’t associate plastic with cheapness, cellophane makes perfect sense as a glamorous material. Like glamour itself, it is alluringly artificial."

However, this entry isn't a glorification of cellophane, which was prized in the 1930s (remember, it was cited in Cole Porter's "You're The Top"), but rather an alert to anyone visiting London between July 7 and Oct. 23. The National Portrait Gallery will host an exhibit, "Glamour Of The Gods," highlighting Hollywood portraits from 1920 to 1960 from Hurrell and other masters of the genre, all from the famed John Kobal Collection.

Lombard will be part of the exhibition, organized by the Santa Barbara Museum of Art, though I'm not completely certain which one of her portraits will be used. However, here are some of the others. First, Paramount stablemate Marlene Dietrich, as taken by Hurrell in 1937:

Here's Greta Garbo and John Gilbert sensually heating up the screen in "Flesh And The Devil" (1926). This still is from Bert Longworth, who in 1937 published a limited-edition book about his portrait exploits called "Hold Still...Hollywood!"

Hurrell again, this time capturing the sensuality of Clark Gable and Joan Crawford in a promotional still for "Dancing Lady" (1933):

Robert Coburn, who took what would be the final portraits of Lombard in late 1941, moved to Columbia later in the decade and took this memorable image of Rita Hayworth for "Gilda" (it was flipped for one of the film's posters):

No Hollywood portrait collection would be complete without Marilyn Monroe, and here's a wonderfully informal Monroe image, taken by Ernest Bachrach in 1952, that I've long been partial to:

Glamour was an integral part of the studio system, as evidenced by this shot of the MGM pressroom:

To learn more about the exhibit, go to http://www.npg.org.uk/glamour/exhib.htm. The gallery will have a range of gifts accompanying the exhibition (including a commemorative book), as well as a contest in which the winner gets a one-night stay and star treatment at the famed Claridge's Hotel. (Travel expenses are apparently not included, and I don't know whether entry is limited to UK residents.) There's even an interactive display allowing one to give a photo "the Golden Age treatment" (http://www.npg.org.uk/glamour/inter.htm).

To the glory of glamour -- even if Lombard isn't completely enthused by the subject... 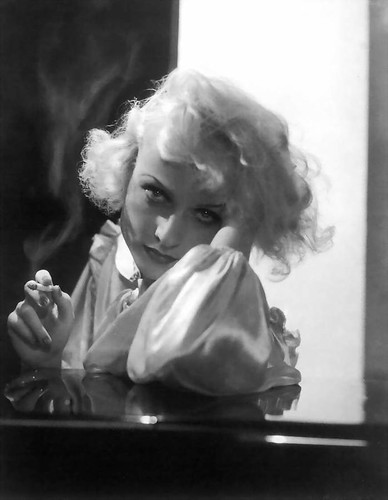