Fan magazines are a wonderful resource for Carole Lombard items and images, even if some of the former have to be sifted with a skeptical eye towards the Hollywood publicity machine. At first, we weren't sure what magazine the following page hails from, but thanks to Amy Jeanne, we discovered it was Movie Classic of July 1932: 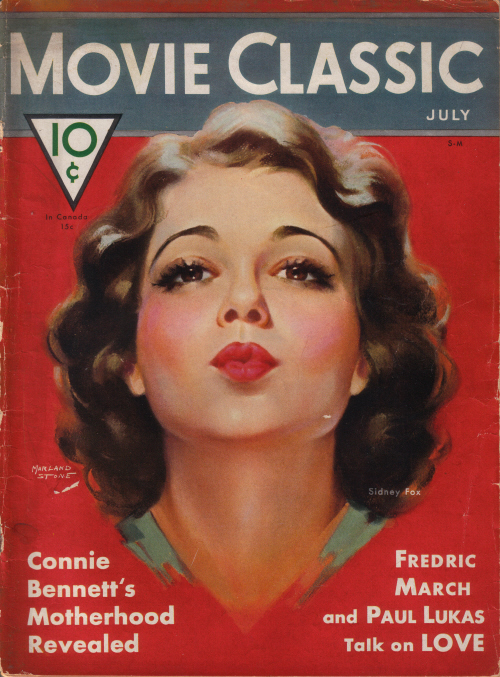 Nice pic of Lombard, one that isn't seen too often. Here's what the caption says:

"Despite ill health, Carole stayed by her post until 'Sinners In The Sun' was completed -- and THEN had a nervous breakdown. Unlike many a star, however, she didn't play on public sympathy. The headline-hunters didn't know of her illness until she was almost recovered. And were they mad? Almost as much as when Carole and William Powell got married secretly -- a year ago June 26th!"

This page is being auctioned at eBay...and since it's from an actual magazine, there's something on the other side. Not an ad, not a table of contents, but photos of another actress, one far less remembered than Lombard.

Her name was Adrienne Dore. Born in 1910 in Coeur d'Alene, Idaho, she moved to Los Angeles in her youth, was named Miss Los Angeles in 1925 and was a runnerup in the Miss America pageant that year (some biographies erroneously list her as having won the title).

Movie work followed; in fact, one of her early films was "The Swim Princess," the 1928 Mack Sennett short featuring Lombard. By 1929 Dore had small roles in Clara Bow's "The Wild Party" and the William Powell vehicle "Pointed Heels."

By 1932, she was at Warners, appearing in a number of films including Kay Francis' "Street Of Women" and Edward G. Robinson's "Two Seconds." She didn't remain at the studio very long, and by 1934 was out of film acting entirely. She died in Woodland Hills, Calif., in November 1992. Dore is so forgotten by all but the most ardent film buffs that the seller for this eBay item lists her last name as "Dare."

Bids begin at 99 cents (none have been made as of this writing), and bidding closes at 4:27 p.m. (Eastern) next Friday. If you're interested in this rare Lombard image as well as some bath shots of an overlooked '30s starlet, go to http://cgi.ebay.com/Carole-Lombard-Adrienne-Dare-Bathing-Beauty-/320705748642?pt=LH_DefaultDomain_0&hash=item4aab8d5ea2.
Collapse