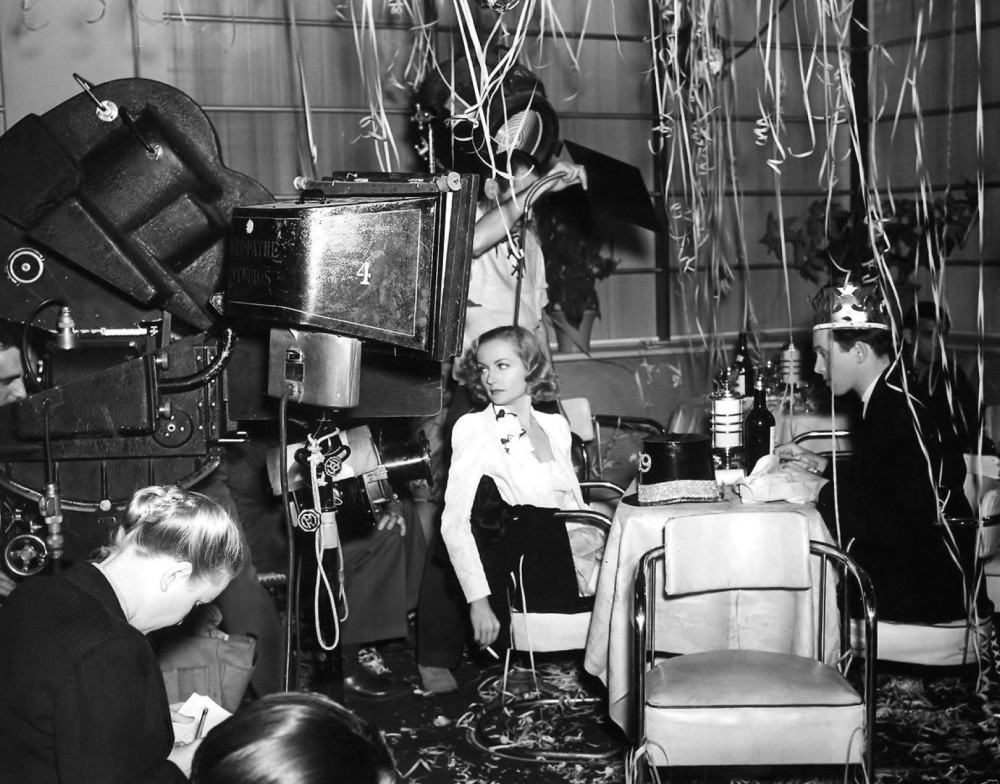 As most of us know, Carole Lombard experienced her share of tragedies during her brief life. One you may not be aware of occurred around "New Year's Eve" -- not the actual day itself, but on a sound stage for her film "Made For Each Other," where the characters she and James Stewart were playing participated in a New Year's party. Here's what happened, according to the Oct. 3, 1938 Los Angeles Evening Herald-Express. (Many thanks to G.D. Hamann for uncovering this item.)

Tragedy was written unexpectedly into the script of a gay New Year's Eve scene in a Carole Lombard picture at Selznick International Studios today, when Edmund Fellegi, 25-year-old property man who plunged into a crowd of extras from a catwalk high above the stage, died at Cedars of Lebanon Hospital.

The accident occurred Saturday morning (Oct. 1), and Fellegi had been unconscious since.

Another victim was Boyd King, an extra who proved a hero by pushing a woman player, Gail Ronn, out of the way just as Fellegi plunged to the stage.

King was struck a glancing blow by the falling man, but was not seriously injured.

Fellegi, who lived with his parents at 215 N. Commonwealth Avenue, had been assigned to the special effects department and was above the crowd of players preparing a batch of balloons that were to be released for the zero hour on the New Year's Eve in the picture, 'Made For Each Other.'

According to two of his co-workers who were on the catwalk at the time, he was lifting a plank when he suddenly lost his balance. Because of the noise he created just as he toppled, all eyes, including Miss Lombard's, looked upward, and each one on the set witnessed the tragic fall.

It so unnerved the players that a recess had to be called.

Fellegi was rushed to the Culver City Community Hospital, and then transferred to Cedars of Lebanon Hospital, where he was treated by Drs. Mark Glaser and C. Lewis Gaulden.

This wasn't the only on-set tragedy during a Lombard film. A pregnant woman visiting the set of "We're Not Dressing," in which a trained bear was used, was fatally mauled by the animal.

With the real New Year's Eve on the horizon, we remind everyone to be careful and to make sure the driver in your party is sober when he or she takes the wheel. We want to keep you around for 2009.
Collapse