The above is a scene from "My Man Godfrey," arguably Carole Lombard's greatest movie. But today, we're going to examine the person who directed her splendid performance, a director who often is overlooked among his peers of that era. Specifically, we'll look at a film he made three years before "Godfrey," but one that still resonates 75 years later...particularly this fall. "Gabriel Over The White House" is a difficult film to describe, so to do it, let's look at when it was made. It was 1932, and the saying, "May you live in interesting times," certainly applied. Unfortunately, there wasn't much money around in such times; the crash of 1929 had escalated into a depression in 1931 that enveloped not only America, but the world. People were poor, jobless, frustrated.

In the U.S., thousands of unemployed veterans of the World War marched on Washington in the summer of 1932, demanding an advance on a bonus they weren't scheduled to receive for another 13 years. They camped on grounds near the Anacostia River, not far from the Capitol, and waited for Congress to provide relief; the bill passed the House of Representatives, but stalled in the Senate. Police evacuated the camp, killing two. President Herbert Hoover then ordered the U.S. Army, led by Gen. Douglas MacArthur, to disperse the marchers, resulting in several more casualties.

Things weren't much better in the country the U.S. vanquished years before. Germany was particularly hard hit economically. It's no wonder that there, and elsewhere, desperate people were seeking any kind of solution.

Publisher William Randolph Hearst sensed the public cynicism and used his film production arm, Cosmopolitan Studios (which, contrary to myth, made many more movies than vehicles for Hearst's mistress, Marion Davies), to capitalize on it. He found an obscure novel, "Gabriel Over The White House," and adapted it into a film that La Cava directed. It stars Walter Huston as a hack politician who's elected president, initially using the White House to further the aims of his cronies. However, after a near-death experience, he does a 180, taking control of the government and using his near-dictatorial powers to employ jobless veterans, end crime (its ringleaders are shot by martial law on a boat near the Statue of Liberty) and ensure world peace (showing foreign leaders America's military might to cower them into submission). 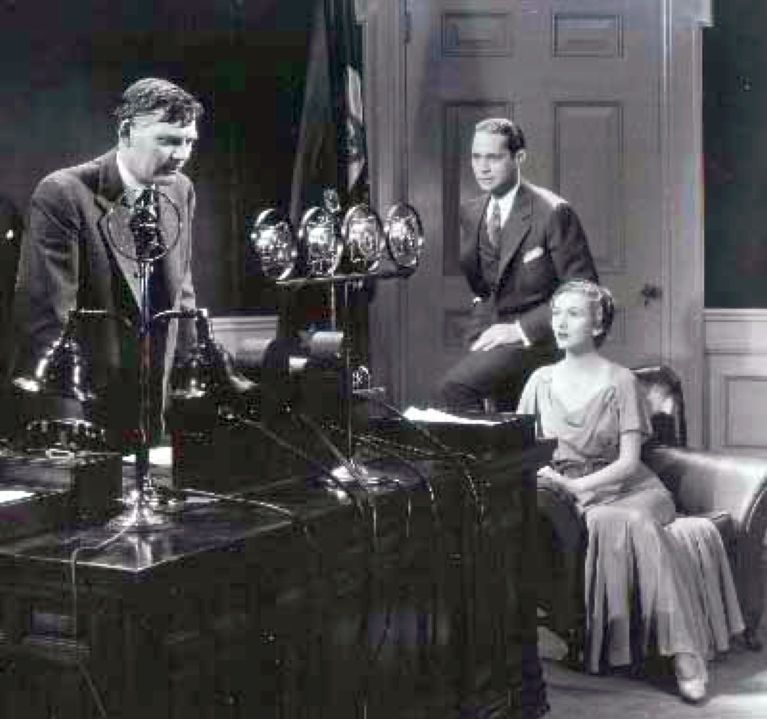 That's Huston with Franchot Tone as his chief of staff and Karen Morley as his secretary.

The film was made in the fall of 1932, but MGM -- which distributed Cosmopolitan product -- reacted coolly. Mogul Louis B. Mayer deemed it an attack on his close friend Hoover and thought releasing it would jeopardize his re-election efforts. (As it turned out, Franklin Roosevelt easily unseated Hoover nonetheless.) After the election, Mayer gave in, but not before Roosevelt -- whom Hearst had backed that fall -- suggested a few minor revisions to the script. It was finally issued in late March of 1933, a few weeks into Roosevelt's presidency.

Roosevelt realized the movie was a fantasy, a wish fulfillment for a frustrated population. (It was a considerable hit.) But was it fantasy from the left or from the right? It's a topic still being debated today, and a phenomenal entry in Turner Classic Movies' "Movie Morlocks" blog (http://moviemorlocks.com/2008/09/17/the-visionary-walter-huston-in-gabriel-over-the-white-house-1933/) examines the film.

"Gabriel," which has yet to be released on DVD, ran earlier this week on TCM as part of its political films series. However, it will run again at 6 a.m. (Eastern) on Oct. 11...and it's well worth viewing. Especially with a presidential election coming up.
Collapse