Yes, Photoplay began the 1940s with a Carole Lombard cover, but this issue also features Lombard-related stuff inside...specifically, a profile of Carole by someone who worked with her. The author is screenwriter Claude Binyon, the former Variety magazine staffer (http://community.livejournal.com/carole_and_co/76563.html) who wrote her final Paramount movie, "True Confession," and "Subject: Lombard" is yet another vivid description of Carole's personality, explaining why she was so beloved in the film community.

Here's Binyon skeet shooting with Lombard at Lake Arrowhead, where part of "True Confession" was being filmed (that's co-star Fred MacMurray in the background): 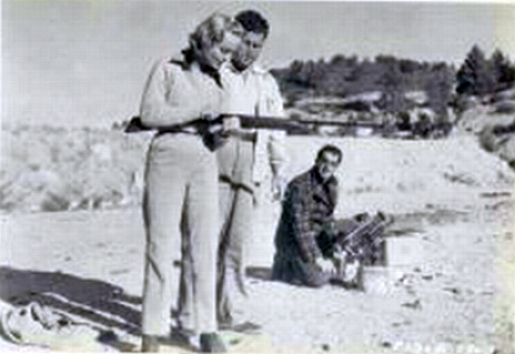 MEMO
TO: Claude Binyon
SUBJECT: Carole Lombard – Please tell us everything you know about her
FROM: The Office of the Editor

The man asked me to write about Carole Lombard, star of RKO’s “Vigil in the Night,” and I said yes. He asked me if I knew her and I said yes. Then he went back to New York and left me in California with a bubble in my brain.

Sure, I know Carole Lombard. I know her like you know somebody you met at a summer resort and can’t remember whether it was Michigan or Wisconsin, or whether you promised to send a post card or save up enough money to get married.

I wrote one picture for her and we went to Lake Arrowhead on location. She started talking big about guns one afternoon, and right away I talked bigger, because a woman is a woman outside of Annie Oakley. Then she invited me to shoot clay targets with her in competition and I took her up.

I hit two of my first ten targets. She hit nine.

So we can put down that the lady is frank.

Fred MacMurray and I went duck hunting last fall in a spot where the wind blows alkali dust in your eyes and the sun beats down on your head with all the subtlety of a pile driver. We sat and sweated in fifty-gallon oil tanks which were sunk in the middle of a mucky pond of water, and we looked into the sun until our eyes burned red-hot, but there were no ducks. Then the sun sank and it was as cold as a mother-in-law’s kiss. The cabin where we would have dinner was two miles away, through mud and sand and mud and sand.

MacMurray stood up finally and stretched; his teeth chattered a message to pneumonia.

“Anybody,” he said, “who’d pay money to sit in a tin can in the desert is nuts.”

In two tanks fifty yards away sat Lombard and Gable.

So we can put down that the lady is nuts.

We were in Miss Lombard’s home and I had never met her. She had asked that I be borrowed to write a script for her, so I was flattered and I had on my best suit.

We sat waiting, the director and I, and finally she came down the stairs in a white, satiny robe trimmed with fur like the girls wear in your dreams when you rescue them from horses’ hooves, after you eat too much pork at night.

She came downstairs in that robe, and if there ever was a million dollars cash she was it –- with her right hand just enough out in front to make you wonder whether to kiss it or shake it.

Behind her was a Pekingese pup, snorting and croaking with asthma, and just as she came into the room the pup stepped on the back of the robe.

I turned the color of a healthy beet. The director smiled in appreciation, because he had spent six weeks in an art school. Miss Lombard took a sharp breath and then said “Haw!”

So we can put down that she has a good build.

The picture was starting, and I was to remain on the set working on a script I thought I had finished.

Lombard was listening. “I’ll fix you up,” she said.

I came back later and Lombard led me to a corner of the set where stood a small building with a crescent cut in the doorway. On it was the identification: “Binyon’s corner.” So we’ll have to admit the lady is a good judge of stories.

There are about twenty members in a duck club I mentioned before, and when the hunting season opens it’s an excuse to let your beard grow and wear old clothes and camp in the dust and play poker and live in a world without women.

So Lombard showed up in a trailer, because there were sleeping quarters only for men. Her clothes were old, and could she grow a beard she’d have had one.

The first night the men at the poker table mumbled and grumbled about the dame in the trailer parked fifty feet away. The second night there was no poker game, and Lombard in her trailer had to send to town for drinks for her guests.

When the boys got home, one of them mentioned Lombard to his wife. She straightened. “I thought,” she said icily, “that this was a club for men.”

“Then why was she there?”

The wife’s eyebrows went up. “Gable?”

“Yeah. He slept in the cabin with us and she slept in her trailer.”

The wife’s eyes were dreamy. “How far,” she asked, “was the trailer from the cabin?”

The man rubbed his head and wished he had hair. “Oh –- fifty feet. Why?”

There was no answer from the wife. The husband pulled at a small, ineffectual ear. “If you think-–” he began. “You should know her. Why, she’s as-—”

So we can put down that Lombard really picked herself a husband.

We were looking at the day’s rushes. Lombard watched herself on the screen and laughed.

“What do you think?” asked the director.

“That’s you,” said the director.

So three days later she signed a new contract –- for more money.

The story above has some splendid anecdotes -- apparently, Carole's beloved Pekingese, Pushface, enabled Binyon to see much more of Lombard than he'd ever anticipated! But if this was the first time he ever met her, was it for "True Confession"? Maybe not.

Binyon had been on Paramount's writing staff since late 1932; the following year, he wrote the script to "Girl Without A Room," a film Lombard was initially assigned to. But according to biographer Larry Swindell in "Screwball," Binyon told Carole it wasn't worthy of her talent, and she was able to finagle her way to another film. Binyon also did uncredited writing on a pair of Lombard films made before "True Confession" -- "Love Before Breakfast," made at Universal, and "The Princess Comes Across."

Nevertheless, as stated earlier, it's a splendid piece, enabling millions outside Hollywood to understand just what Lombard meant to people in the industry. We can put down that Claude Binyon was one helluva writer.
Collapse